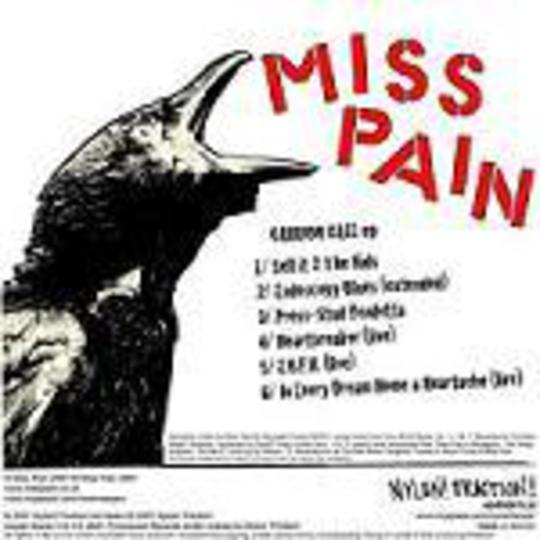 However, it’s hard to imagine our theoretical uberband would write a sarkily desire-racked tribute to inflammable nightwear whose breathless bridge contained the couplet “Nylon! Friction! Michael Jackson! In Thriller!”. And of course they wouldn’t have Sarah’s crisp, no-nonsense Carry On... vocals punctuating their red-lit, neon-highlighted sleaze-pop with a slightly unnerving Head Girl authority. I’m also pretty certain that no one but Miss Pain would ever even contemplate writing a song called ‘Endoscopy Blues’ which is about – yes – an endoscopy; and if they did, they definitely wouldn’t do it so well. But there might well be a similar knowing-wink, glam fancy dress, dance-compelling tunefulness to both bands; a like tendency to take the whole “sexy music” idea right through its logical conclusion and out the other side and end up with something utterly marvellous.

And then, of course, Miss Pain could sue Soft Cramps’ asses for trespassing on their S&M(ills&Boon) sleaze-cabaret aesthetic territory, the bastards. Man, that’d be a fight worth sitting in on. “In the blue corner, the Human Fly. In the even more blue corner, the S&M endoscopy hospital team...”

*on which you need to crank up the volume a bit to overcome the whole ‘live recording sound quality’ issue.