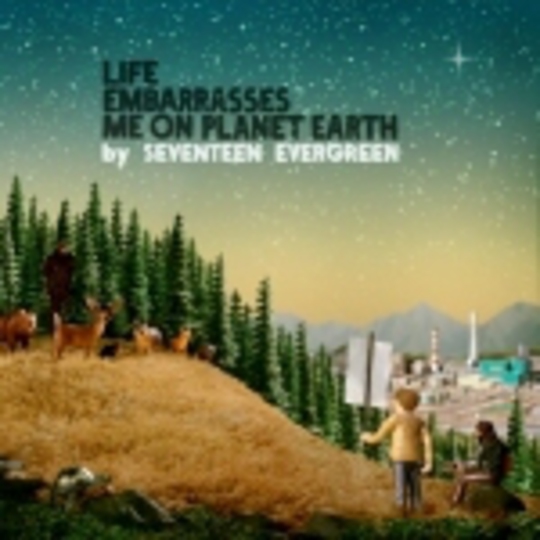 While the roots of Seventeen Evergreen’s luscious indie-pop can be traced back not so far to the heady daze of Mercury Rev’s Deserters Songs, the Sacramento-spawned duo of Caleb Pate and Nephi Evans execute their melancholic arrangements with a sci-fi wit and almost contradictory warmth that belies their vulnerability. Bold, brassy compositions are in short supply – Life Embarrasses Me On Planet Earth is a record that reveals its layers slowly, always with one eye on the fire escape should the focused assessment of their material get a little too heated.

It’s this feeling of fearfulness, ish, in these nine tracks that sets Seventeen Evergreen’s debut long-player above the likes of The Silent League’s recently released _Of Stars And Other Somebodies. While the two records share a similar aesthetic – again, echoes of Mercury Rev and their staring-into-space peer group serve as song informants – there’s a nervousness, a twitchiness, to this album that is immediately endearing; it’s familiar yet alienated enough to have the listener wanting to offer its twin architects a hug and a mug of Horlicks. It’s a little Under The Western Freeway, a little The Soft Bulletin; it’s nothing wholly revelatory, for sure, but it is decidedly enjoyable regardless of its many nods to acts previous.

Tracks weave in and out of each other to the degree where separating one from another in a critical sense is near impossible. While some will hear this as a flatness unwelcome in albums designed by their debut nature to make an impact, those able to afford Life Embarrasses Me… a little more time than they would, say, your average super-hyped indie record du jour will reap great rewards from the record’s myriad subtleties that emerge only after prolonged exposure. ‘Gray’, for example, begins life as a meandering go-nowhere-fast instrumental, but following a few repeat run-throughs it becomes clear that the piece binds its parent LP’s halves very effectively; it’s a bridge that links Seventeen Evergreen’s obvious affections for both conventional pop music and slightly leftfield electronica. We’re not talking Warp-level bleep hysterics here, but there are parallels to be drawn with Thom Yorke’s The Eraser.

Despite a slight heard-it-before overtone, Life Embarrasses Me… is a pleasantly distracting affair, providing its audience of one-at-a-time figures early on that it’s not an instantaneously gratifying offering. Its middling pace will infuriate those raised on quick-fix hits, but any fans of the aforementioned comparison acts and also Stephen Malkmus’ poppier moments will leave their various Seventeen Evergreen encounters smugly fulfilled. This is a well-realised debut that comprises a solid foundation from where to build a project that can potentially expand into the darkest outer reaches of contemporary space rock.