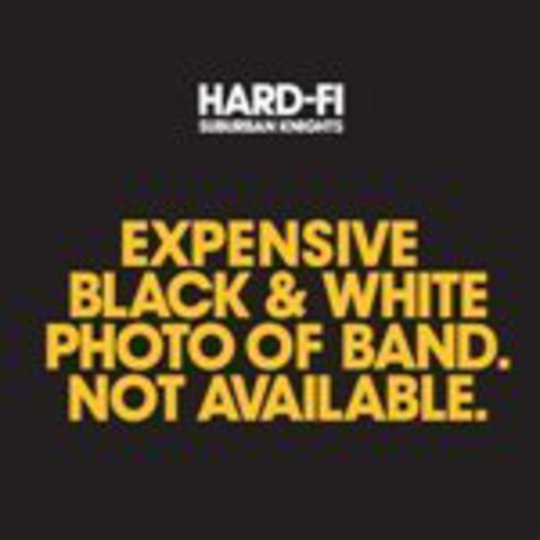 Fresh from laying waste to rock's hallowed tradition of the record cover with their sleeveless new album, a kind of long-playing 'vest' if you will, Hard-Fi turn their attentions to the thorny issue of global politics with latest single 'Suburban Knights': "Global terror they say, we are at war / But I ain't got time for that cos, these bills keep dropping through my door". Oh really lads, you shouldn't have.

This might win an award for stating the bleeding obvious, but Hard-Fi are potentially the most inane band the world has ever seen. Fighting shy even of The Enemy's hackneyed portrayals of working class desperation, the Staines massive (or should that be massive staines?) offer listless portrayals of lower-middle class life in shit satellite towns, a bit like The Office without the laughs, and seemingly without fire except a mild impatience at receiving their next paycheque. When they sing about being broke, it's nothing that couldn't be cured by taking a few packed lunches into work.

And so in the most begrudging of fashions we come to the music, which happens to be rather effective, and certainly a stronger comeback than those of us praying for their speedy downfall might have wished for. A belligerent slice of Specials-via-Kasabian guitar pop, polished to an '80s stadium rock sheen, it can’t disguise the simple fact that as a lyricist Richard Archer is about as thought provoking as an evening spent down a leisure complex somewhere off the M3: “All these people who criticise us / We're only saying what we're seeing with our own eyes”. If passive reflection, with nary an iota of wit or insight was all they set out to achieve, then congratulations lads, you’ve achieved it, with bells on.