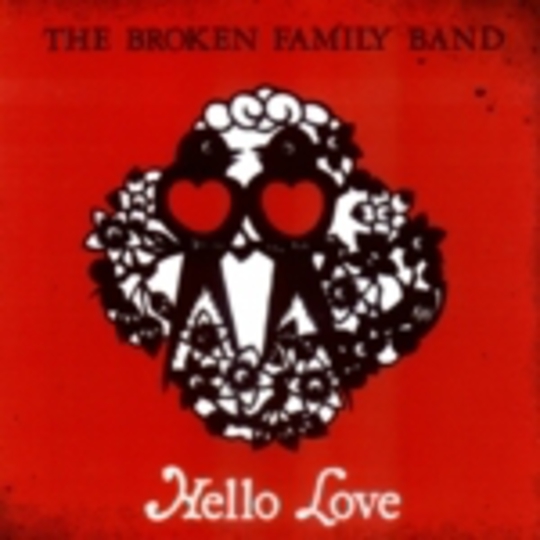 If slow and steady wins the race, The Broken Family Band are surely due to arrive victorious at the finish sometime by the end of the century. With a following gradually spiralling upwards and three long-players and two mini-albums already under their belt since their first release in late 2002, there’s something about the London/Cambridge quartet which suggests that if you let them in with their particular brand of alt-rock with a dash of country, they can make your life pretty good - to coin some hippy phrase, with the BFB it’s, like, y’know, totally about the music.

Album number four is called Hello Love, and it is great. The successor to 2006’s Balls, the basic structure of last year’s sound is maintained – ever-present are the light touches of country (‘Give and Take’, ‘So Many Lovers’) and the odd Pavement-esque rock-out ('Hey Captain!') – but it is the changes which make this a near-essential listen. All but banished is the occasional American twang to the vocals, previously present on releases of yesteryear, and introduced to the fold is a heavier sound, first manifesting itself as early as the second track in the guttural yell of the ‘70s-stomping distorted rockgasm of ‘Love Your Man, Love Your Woman’.

But it’s not necessarily the distortion that makes this a heavier-set affair, more the vitriol in some of the lyrics. Whereas before their louder efforts have maintained a generally fuzzy and light-hearted feel, in songs like ‘Dancing on the 4th Floor’ (the album’s standout track and mid-point) there seems genuine annoyance at love and life as vocalist Steven Adams heads off on a tangent, ranting in the style of Davey McManus in his most Crocketts of moments about how the songs are “just love reduced to couplets as if the verses sum up love, like love needs a chorus to make it real”, ‘til the hairs on the back of your neck stand to attention.

Elsewhere, amongst the now-standard Family bandits’ country touches, Hello Love carries hints of Belle and Sebastian’s beaming indie-pop (in opener ‘Leaps’), as well as the aforementioned American moments, but the biggest debt here is owed undoubtedly to Seafood, the similarity to which it is almost impossible to ignore. Adams’ voice possesses the same register as Seafood counterpart David Line, and the identical double-tracked vocal effect used heavily throughout the album (as well as the presence of a female vocalist every so often) only heightens the similarity - indeed, I could happily believe that this is Seafood for at least three-quarters of the affair. Incidentally, this would have been their best album since When Do We Start Fighting.

Along with a shift in the lyrical content – these songs are more about successful love than the failed variety – Hello Love feels like a complete body of work; cohesive and pleasing all round, and even if not every song takes your fancy the majority of the work here is so consistently good - I can't single out one track here that doesn't deserve a place on the album - that it merits the attention of indie kids nationwide. Spiffing.

We Apologise For Nothing