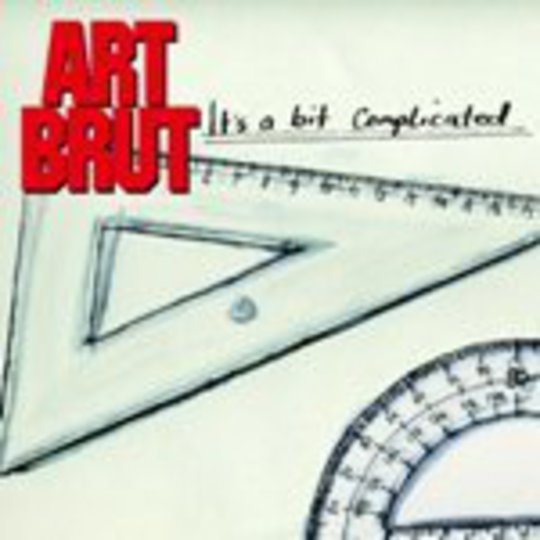 _“...stop buying your albums from the supermarket,

They only sell things that have charted,

This seemed a somewhat hollow statement when Eddie Argos, unbuttoning his shirt and sweeping his dank locks behind his ears, sullenly proclaimed on 'Formed A Band' that the act were beyond their seemingly makeshift standings. With a poignantly deranged swipe at music and romance, alongside the faded aspirations of that “Art Brut! Top of the Pops!” appearance, Bang Bang Rock And Roll seemed a brilliantly blunt, solitary lunge.

So this is a contentious release. Why return for a second bout? The pitfalls of the industry Argos bemoaned, perhaps? Peculiarly, Art Brut found their unabashed insecurities adopted stateside just when their familiar "Ready Art Brut?" routine seemed to be tiring in the UK. And so, a dilemma: retire with acclaim or indulge in Hennessey with Morrissey and the kind of frolics Bang Bang Rock And Roll set out to lampoon. Whilst the snide witticisms that dominated their debut remain, the difficulties Argos is reported to have had writing new material are on show. With his input far too often unenthusiastically forced, It’s A Bit Complicated seems confused, little more than a tame reiteration of their previous shtick. Immediately 'Pump Up The Volume' has Argos posing his customary Jonathan Richman-aping innocence with “Is it so wrong to break from your kiss to turn up a pop song?”. But as this tumbles into 'Direct Hit', and that to 'St Pauli', there seems to be a worrying dearth of the stout statesman's hastily-spat observations of old.

But you can rely on Argos to charm his way out of a situation, as 'People In Love' rampantly rattles off the sort of droll gripes that littered BBR&R (“What becomes of the broken hearted? They’re drunk for a few weeks then they’re back where they started”). But tenuous as it may be, for an act named after a renowned outsider art movement, the tediously uninspired watercolour stationary that adorns the cover serves to illustrate a certain lack of inspiration on Brut's behalf. Regularly dulled by the bolder production Argos finds his previously centerpiece contribution often drowned. A subtle ploy? Whilst his comic grasp retains a crucial sensibility that verges on absurd rather than inane, Argos regularly seems to struggle, often desperately returning to repeat his best lines. Fortunate, then, that at his peak his occasionally sublime input can carry the record to clumsily lead glory.

From Argos flailing his arms with brash delirium in 'Post Soothing Out' to his declaration of independence in 'I Will Survive', Art Brut manage to retain a frenetic brilliance. But whilst 'Blame It On The Trains' seems textbook material, Argos strains to be much more than anecdotal (“Up all night sharing a secret, you're on a promise and I'm going to keep it”). Whilst there is enough here to please those who were won over by Argos' catalogue first time round, ultimately Art Brut appear one-dimensional where they once seemed so dynamic and invigorating. Though there is no doubt the live circuit is where this material comes to life, where Bang Bang Rock And Roll was relentlessly littered with acute moments of perceptive absurdity, It's A Bit Complicated's are all a little too sporadic.

The Treasured Memories Of Cecil Element