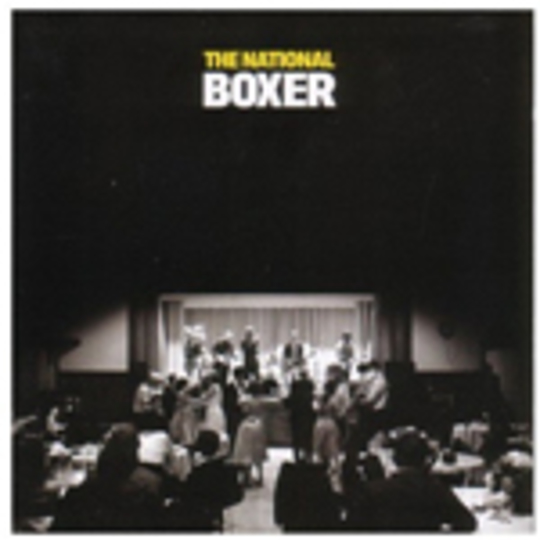 “Stay up
super late tonight, picking apples,
making pie,
put a little something
in our lemonade
and take it with us…”

What a dross opening verse to a record. Try to spout those sub-Springsteen lines without sounding a prat. Uttered by Matt Berninger’s reassuring croon, though, it seems so vital. Berninger seems the sort of majestic loser that you can associate with, a man ridden with gin-soaked, existential guilt. Under the dreary-eyed malaise of ‘Fake Empire’, The National return. Whilst the triumphant fist that previous LP Alligator rose may have lowered, Boxer documents the standard relationship gripes with absolute resignation and, though not quite as immediately arresting and rampant as its plaudit-acquiring predecessor, is an album of understated brilliance.

In the same renounced manner as their second album Sad Songs For Dirty Lovers, downtrodden and disenfranchised, Boxer documents the secluded aspect of city life, as ‘Mistaken For Strangers’ potently alludes to distant work acquaintances. The record is full of regret and perverted maliciousness. ‘Brainy’ casually scorns that “though I keep your fingerprints in a pink folder in the middle of my table, [...] think I better follow you around”, as if a disgruntled voyeur in denial of a recent cold shoulder, delivered by Berninger with the deadpan misery and embedded dry wit of Stephen Merritt or David Berman.

Boxer is far more subdued than any of The National’s previous efforts. Whilst they are forever indebted to the unassuming contribution from drummer Bryan Devendorf, who effortlessly alternates from rampant flurries to muted details, it is the subtle orchestral aspect to the record that stands out, with the same washed arrangements that Grizzly Bear and close cohorts Clogs manage to incorporate so casually.

Embroiled by dealing with commitment and dedication, whilst
‘Apartment Story’ and ‘Guest Room’ are call to arms for distant gentleman lovers to "just tie your women to your wrist, give her the room to tie up the other", enlightened by a newfound infatuation, the most imposing moments on the record are those that detail a relationship’s downfall. Despite something of a lull, 'Start A War' snipes with conviction at a partner’s reluctance to confront their problems. 'Slow Show' begs to start all over again, bemoaning that “you know that I dreamed about you, for 29 years before I met you” with the stone-faced realisation that the sly fumble with the neighbour was neither particularly sly, nor worth the relationship now threatened.

‘Gospel’ closes proceedings in a suitably understated manner. Whilst this aspect to the record can initially all seem rather lukewarm, the resigned tone of Boxer is one of its finest aspects, authentically affecting and reaffirming of its state.

“Stay up
super late tonight, picking apples,
making pie,
put a little something
in our lemonade
and take it with us…”_