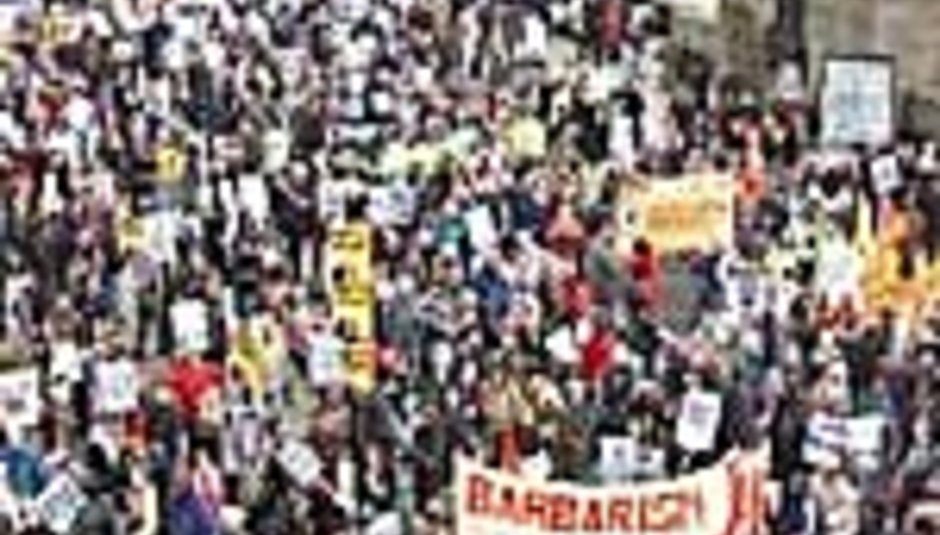 by Ollie Appleby February 15th, 2003
Anti-war protesters have taken to the streets of London in what is expected to be one of the biggest protests ever seen in Britain.

Police have officially estimated that there were around 150,000 marchers in London half an hour ago, at 12:30, this figure is expected to rise significantly with organisers expecting up to 500,000 in the capital alone. Check out the BBC's JamCams around Hyde Park for live images of the progress of the march.

Other protests are being held in regional the capitals of Glasgow and Belfast with similar demonstrations being staged around the world, with London being alongside New York (the headquarters of the UN) Rome and Berlin as the worlds largest.

The issues involved are many and mixed however, with the general march is touted as 'anti-war' and speakers and protesters from groups such as the organisers Stop The War Coalition, The Campaign for Nuclear Disarmament (CND) and The Muslim Association of Britain.

Posters (official or otherwise) have claimed the march as anti-war, pro-Palistinian, pro-democracy, anti-government, pro-UN, anti-American and much more, speakers this afternoon in Hyde Park are to include Liberal Democrat leader Charles Kennedy (expected to tell the rally he is not a pacifist and his party is not anti-war) US activist Jesse Jackson and music from supporters Damon Albarn and Ms Dynamite.

The rally is planned to finish at about 5pm, the Metropolitan Police are expecting no trouble as long as everyone can get some cigarettes and a McDonalds on the way home.