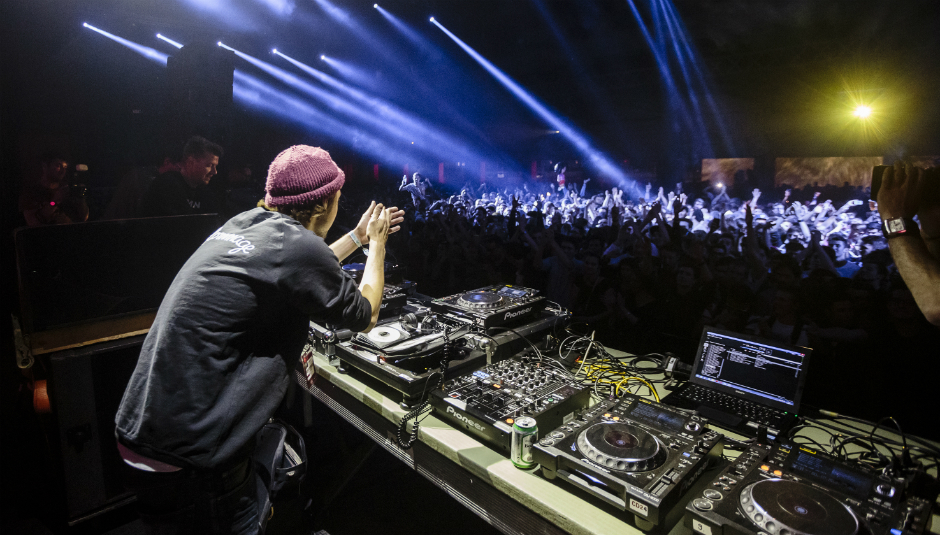 Nuits Sonores Preview - Ones To Watch

If you could drop a pin anywhere in Europe in which to start your own springtime music festival, you could do a lot worse than the shimmering Southern tip of Lyon. Here, in the languorous V-shape carved from where the Rhône meets the Saône, sits an area locally known as the Confluence. It’s a half hour stroll down from the heart of the gastronomic capital, away from the classical splendour of the Fourvière basilica and the narrow Medieval streets that houses the Cathédrale Saint Jean-Baptiste into an area that’s flourishing with an altogether more modern form of pan-European culture. France has long held a passionate love affair with electronic music, and every year since 2002 Nuits Sonores has taken over this formerly industrial no-man's land and transformed it into a pulsating, kinetic sprawl. The dense festival programme reads more like a treasure hunt, with events popping up everywhere from the renowned contemporary art gallery La Sucrière to hidden late-night garden parties and way, way beyond. This year, Drowned In Sound is delighted to partner with Nuits Sonores, and here’s our quick guide to some of the weekend’s highlights.

It’s odd that the notion of events being ‘curated’ has taken a beating over the course of the last year or so when there’s events like this that shape-up like a triple knockout blow for the faithfully gathered. Each day from Thursday to Saturday, a big name DJ has selected a roster of up-and-coming talent from the fringes of electronic music to showcase their abilities outside of the dark shadows of the nightclub. Thursday’s curator is Motor City Drum Ensemble, whose sonic pallette stretches way out to the distant horizons of soul, disco, jazz, house, and techno. The breadth of his taste is superbly demonstrated on his 2011 DJ Kicks release, a mix that provides a musical education with impeccably-chosen cuts from Sun Ra through to Pevan Everett. Expect a thoroughly lethal daytime cocktail with sets from the likes of Leroy Burgess and Pablo Valentino.

If anyone’s entitled to rest on their laurels and coast on the back of a near-legendary career, it’s France’s own Laurent Garnier. Yet the former resident of both The Hacienda and The Rex in Paris has integrity which runs to the very core. For a start, he won’t DJ for less than six hours as a matter of principle and, as he said to Resident Advisor: “I need to go everywhere, to spin in different directions, otherwise I feel like I'm cheating, I'm lying to the crowd." Bringing his deep knowledge to bear along with his effortless, citrus-fresh house style, he’ll be playing back-to-back b2b sets (no, really) with the likes of Jackmaster and Copy Paste Soul.

Seth "If Avicii was here I would definitely light dog shit in front of his door” Troxler may well be Noel Gallagher’s spiritual brother when it comes to running his mouth, but thankfully there’s no such similarities when it comes to fresh musical output. Known for a string of intoxicating underground bangers, as well as being the chief exponent of the Miami Vice open-knecked Hawaiian shirt vibe, here he’ll be doing a b2b with The Martinez Brothers and introducing the likes of London’s house supremo Fort Romeau to proceedings.

Best Of The Rest:

Dig if you will, the picture: It’s 2012 and Chicago’s Smart Bar, North America’s oldest independent club and a place that Frankie Knuckles calls home, is in the process of selecting their first creative director in their three-decade history. From the unlimited pool of talent they have to draw from, one figure emerges as the leading light to propel the club forward into the next decade - that figure is The Black Madonna. With a string of taut, fluid, and soulful house cuts in the last few years (check out 2013’s We Still Believe a for muscular Tour De Force), she’s a fierce and politically charged talent whose sets have been igniting Berlin’s Panorama Bar (where she’s been newly announced as a resident) with increasing regularity throughout 2016. Expect bold, striking brush-strokes on a canvas made of shape-shifting, Chicago-sourced beats.

In a field more closely associated with mixes, EPs and singles, Daniel Avery stands apart as the creator of one of the decade’s most exploratory and critically-acclaimed techno LPs,2013's Drone Logic. His atmospheric, textured, brooding sets show him to be a master of tension and release, whilst his impressive command of the dancefloor means he can time to the millisecond when to put on the boosters and send the whole thing shuttling into the stratosphere.

Moderat are two-parts Modeselektor and one-part Apparat, combined to mix a slick combination of minimal techno grooves laced with seductive after-hours vocal hooks. Now on their third album, they’ve quietly gone about ratcheting up a feverish fanbase across Europe, and recent shows in the UK were met with widespread acclaim.

Aside from the main proceedings, Nuits Sonores promises a sweeping range of events and activities to showcase Lyon as a vibrant cultural epicentre. There’s a multi-disciplinary art-showcase springing from a creative partnership with Seoul, as well as film installations and documentary screenings. On Sunday there’s a carnival atmosphere with a village fete-style party, and if that wasn’t enough there’s an entire miniature festival for kids. Who said Paris was the only place to be this Springtime?

More information about the festival and tickets can be found here