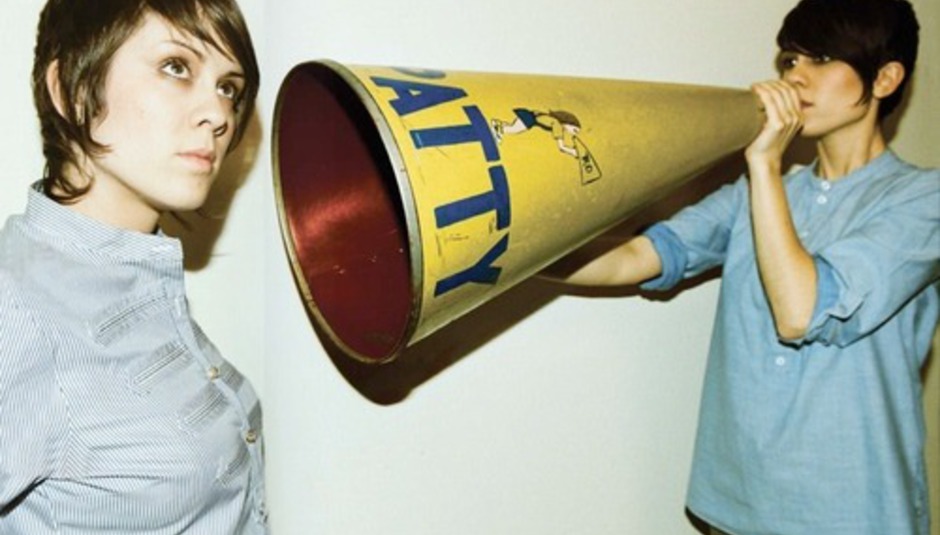 Tegan & Sara's open letter calling Tyler, The Creator on his homophobia and misogyny

This weekend, an eloquent open letter from Tegan & Sara criticizing both Odd Future and the media's acceptance and celebration of their music, which features rape fantasies and homophobia, was met by the following heinous response from Tyler, The Creator on Twitter:

If Tegan And Sara Need Some Hard Dick, Hit Me Up!

Really? I mean, seriously? SERIOUSLY?! That's either some sort of post-logic philosophical response that refuses to accept their premise by taking it to the most extreme conclusion or an orchestrated attempt to fight fire with hype-fuel or the ignorant splutterings of a grotesque sub-human. Be it hyper-offensive pantomime or poorly constructed social commentary, it just feels like a disgusting thing to wake up to and read in your Twitter feed of a Monday morning- and I say that as someone who loves Peter Hook, Julia Davis and Chris Morris.

Here's the open letter posted on TeganAndSara.com which hits a lot of nails on the head, and I'm surprised there wasn't a similar reaction when Kanye's album full of sexist slurs was deemed perfect by a certain indie-rock website:

When will misogynistic and homophobic ranting and raving result in meaningful repercussions in the entertainment industry? When will they be treated with the same seriousness as racist and anti-Semitic offenses? While an artist who can barely get a sentence fragment out without using homophobic slurs is celebrated on the cover of every magazine, blog and newspaper, I’m disheartened that any self-respecting human being could stand in support with a message so vile.

As journalists and colleagues defend, excuse and congratulate ‘Tyler, the Creator,’ I find it impossible not to comment. In any other industry would I be expected to tolerate, overlook and find deeper meaning in this kid’s sickening rhetoric? Why should I care about this music or its “brilliance” when the message is so repulsive and irresponsible? There is much that upsets me in this world, and this certainly isn’t the first time I’ve drafted an open letter or complaint, but in the past I’ve found an opinion – some like-minded commentary – that let me rest assured that my outrage, my voice, had been accounted for. Not this time.

If any of the bands whose records are held in similar esteem as Goblin had lyrics littered with rape fantasies and slurs, would they be labeled hate mongers? I realize I could ask that question of DOZENS of other artists, but is Tyler exempt because people are afraid of the backlash? The inevitable claim that detractors are being racist, or the brush-off that not “getting it” would indicate that you’re “old” (or a faggot)? Because, the more I think about it, the more I think people don’t actually want to go up against this particular bully because he’s popular. Who sticks up for women and gay people now? It seems entirely uncool to do so in the indie rock world, and I’ll argue that point with ANYONE…