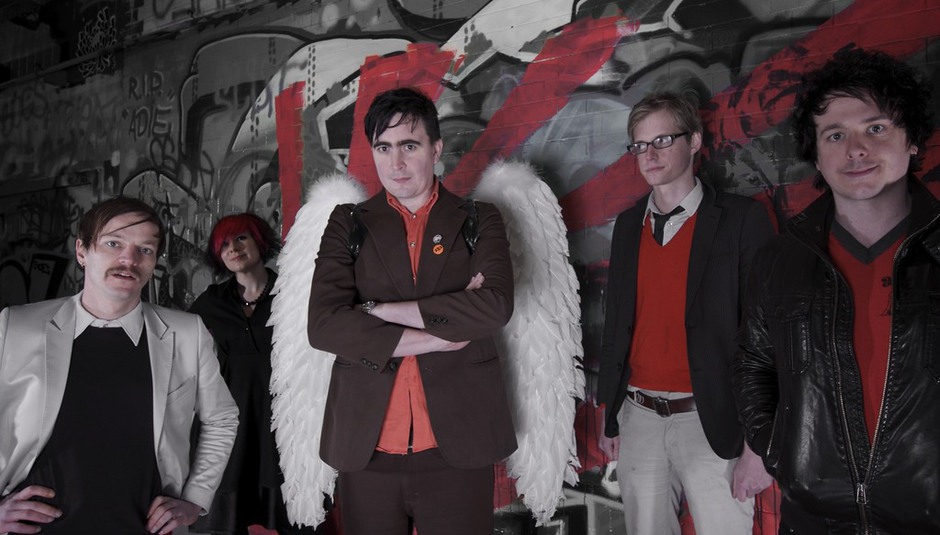 Art Brut return with a new album this year. Hoorah! It's been produced by Frank Black again and is called Brilliant...Tragic! and comes out on May 23 through Cooking Vinyl. They've also released a track into the wild, called 'Unprofessional Wrestling'. More about that in a bit.

You can get your hands on 'Unprofessional Wrestling' by visiting this page. It doesn't appear on the album's tracklisting so the best guess would be to say that it is, in fact, not on the record. But it is new, in any case. You can also have a look at the artwork, designed by Jamie McKelvie. Lovely, isn't it? Edmund of Argos explains how it is different from the other Art Brut albums:

"Well I sing on this one, Ian has a new pedal, Fred sings backing vocals for the first time and we let Jasper play a guitar solo (only on two strings though). Also, with the writing for the last album I really enjoyed writing about Mundane things trying to make them exciting. There were songs about riding buses, summer jobs and having songs trapped in your head. This time the album is more about how I think I'm psychic, songs for my funeral, the principality of Sealand and Axl Rose. Weightier topics I think. I'm also sexier now"

And in addition to ALL OF THAT, there's also a residency at London's Lexington! That runs from Monday May 30 til Friday June 3 inclusive, so FIVE whole dates in total.