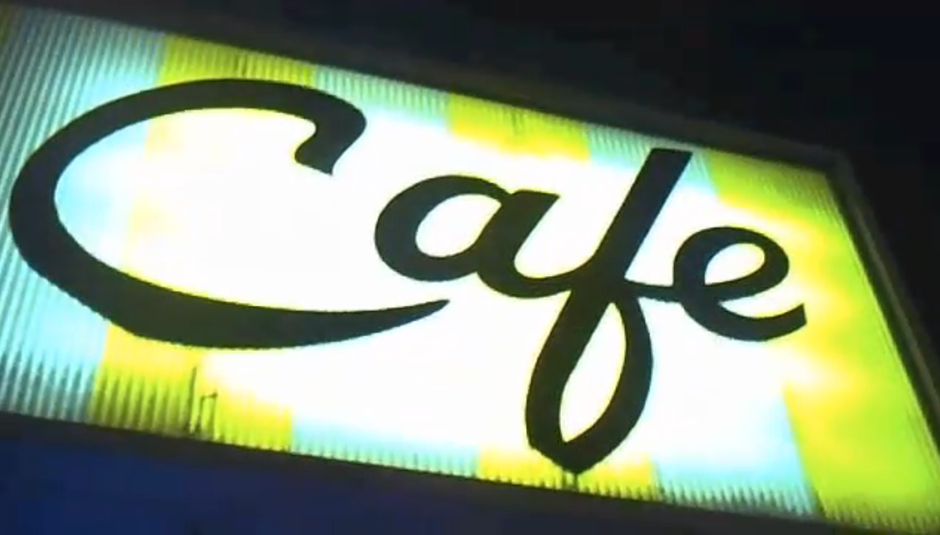 Blood Red Shoes are big fans of the popular TV series Twin Peaks. Yeah, the David Lynch one. It's very good. They went over to the area in the Northwest of America, where the series was filmed recently and took some video footage. They also wrote us some lovely words...look out for the pie!

Laura-Mary and I first got into Twin Peaks before we knew each other or started a band. It was originally broadcast in 1990 in the USA, but I remember it as being one of the first things shown on Channel 5 when it started up, which for some reason I could never tune into at my mum's house but some of my friends in college (the weird kids) would talk about it in a way that made me want a part of it. Once you see a couple of episodes you're hooked and from then on I became a fan; I distinctly remember scouring the internet for downloads of the second season, which you couldn't buy on DVD until a few years ago - and being utterly frustrated that I couldn't find anything (the first season ends with the putative "hero" of the series being shot, you have no idea whether he's dead or alive...now THAT'S how you do a cliffhanger).

Fast forward a couple of years and somewhere in our early touring life Laura-Mary and I discover that we both have similar, hitherto unspoken, addictions to Twin Peaks, so from the day the second season comes out on DVD it becomes a firm fixture on tour, where we watch it every night on a shit laptop when we're crashing on someone's floor (or about a year later, in hotels and our freshly-dvd-equipped tour van). I don't really know precisely what it is that draws musicians into the world of Twin Peaks, but I've met very few musicians who AREN'T in love with it. There's something about the twisted atmosphere, that nagging, unsettling darkness to it that chimes in with people of an artistic bent, who are usually fairly mentally unsettled themselves, I suppose. For a band like us who are fixated by the unspoken, secretive, darker underside to the human experience, it's essential viewing, and in fact articulates in a very musical way - by evoking rathern than being explicit.

Fast forward another couple of years and we finally get the chance to tour the USA properly. First stop: Seattle, where we fly in two days early and convince our nice-as-cherry-pie tour manager Whit into driving us into the surrounding Snoqualmie area where most of the series was shot. we get to relive the 90s dream like a pair of 13-year-old dorky grunge kids because Whit, as the sound guy for the Jesus Lizard since 1990, has toured with most of our favourite bands ever, and gets a thorough quizzing throughout the trip. This blog is the footage we took there, set to a backdrop of "into the night" - our cover of a song from the series which we did for a Radio 1 session earlier this year.