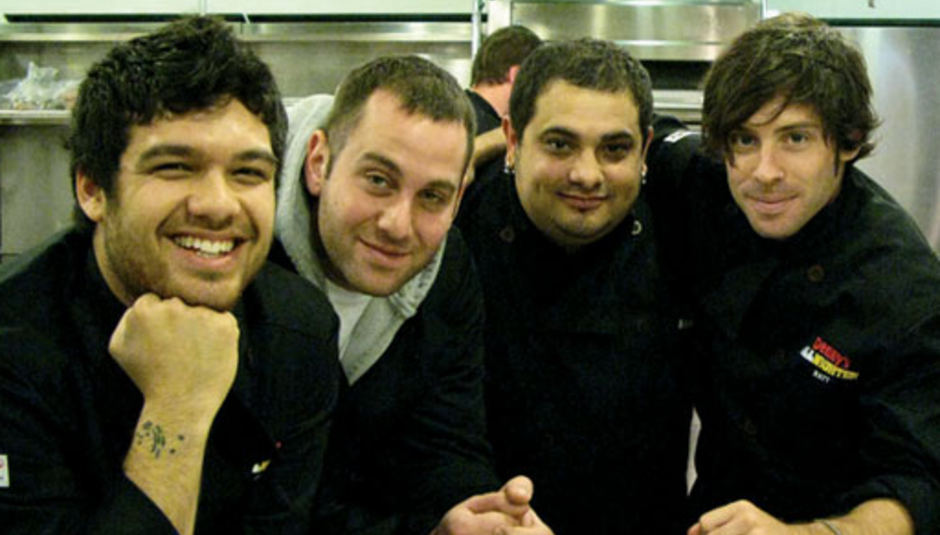 Real men eat deep-fried meat in buns and play guitars, really-_really_ loud. This combo of truth is the inspiration behind a new menu for American diner chain _Denny's_. According to the slightly unbelievable press release, _Denny’s Rockstar Menu_ (presented by _Dr Pepper_) introduces a new line-up of chefs, who happen to be in vaguely popular rock bands. **All-American Rejects, Taking Back Sunday** (pictured), **Plain White T’s**, and the **Eagles of Death Metal** have braved the challenge and put together the following dishes for the chain's new (available as of last night) late night 10pm 'til 5am menu: > - _Taking Back Bacon Burger Fries_, created by New York-based band Taking Back Sunday, combines two of the artists’ favorite foods – bacon cheeseburgers and loaded cheese fries – in a new, sharable way with familiar flavors of fries, cheese, hamburger, crispy bacon, onion, tomato, and pickles. They even top it off with ketchup and mustard.

We did not make this story up, promise.

_DiScuss: any American readers fancy reviewing these culinary delights for DiS? Which British bands and fast-food chains would you expect to follow suit? What dishes would they make? The Kaiser Chips and Beans? Boy With the Falafel Wrap? Forward Waffles? PJ Sarnie? My Bloody Steak Sandwich? You can all do much better than these I'm sure... _