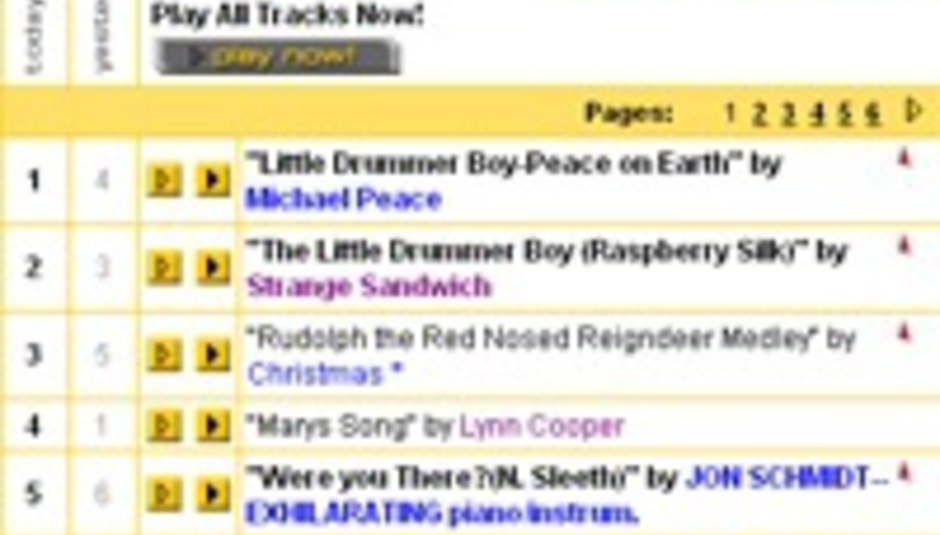 The Weekly DiScussion: The Charts, or why we're obsessed with numbers

Every week, the kind folk of DrownedinSound.com (hi, that’s us) offer up a comprehensive overview of the latest pop charts. Hopefully you find it useful. Sometimes, though, I detect that, behind the bile, hate, sarcasm and ennui displayed by a certain M Diver, there’s not a lot of love for the top 40.

So why does DiS write about it? And equally, why is it one of the most avidly read and commented-upon articles every week? Hell if we actually know, but I suggest that, like Radiohead, we believe everything needs to be in its right place. Or, as shown by the popularity of magazines like Q, we just love lists.

As residents of a world in thrall to the twin fires of competition and hierarchy, it’s only natural to see how our favourite bands are doing; whether they’ve sold more than that band you really hate or just if someone’s stopped Mika from topping the charts. But given the top 40 and, indeed, top 75 largely only represents the ‘big’ indie bands and all matter of pop fodder, it seems completely irrelevant to our world.

So the questions are: why are we still obsessed with them, and all the other charts we look at? What’s a true judge of popularity these days?

last.fm charts seem to be viewed with great regularity and are a well-quoted source for discovering new artists, especially given the whole ‘similar tastes’ business. Hype Machine is a website that has grown exponentially over the past 12 months, but its users seem to remain static in their love of Arcade Fire, The Shins, Modest Mouse and Radiohead. Oh, and any combination of the Broken Social Scene family.

But perhaps this is relevant? Maybe in the underbelly of the music industry these are the bands that light our fire? Interestingly, though, many of the aforementioned are chart botherers in their own right (to varying degrees). Equally, take a look at the top five most listened to tunes on last.fm: they are Fall Out Boy ('...Arms Race'), Snow Patrol ('Chasing Cars'), Muse ('Starlight'), Bloc Party ('The Prayer) and The Postal Service ('Such Great Heights'; the ultimate blog band). Tracks that almost unanimously bothered the top ten in the UK. Do the charts market the records, then?

If the charts are such a massive boost to a band, then wherefore the indie charts? Currently the only place you can see them is on Radio 1’s website, whereas previously they were all over the music press and beyond.

Naturally, what qualifies as an independent release these days is mired in conjecture, and you probably don’t want to see shit dance covers of ‘80s AOR classics at the top of your precious lists, knocking Los Campesinos! off the top.

Perhaps a demographically-inclined focus chart? What that actually means, my non-bullshit marketing reading friends, is an independent record store chart: the top seven-inches being sold in Rough Trade, Puregroove, Jumbo et al. But then again, who cares about whether your favourite band is in the charts or not?

DiScuss: Do you care about the charts? Do ‘our bands’ need a chart of their own? What charts or lists do you look at?