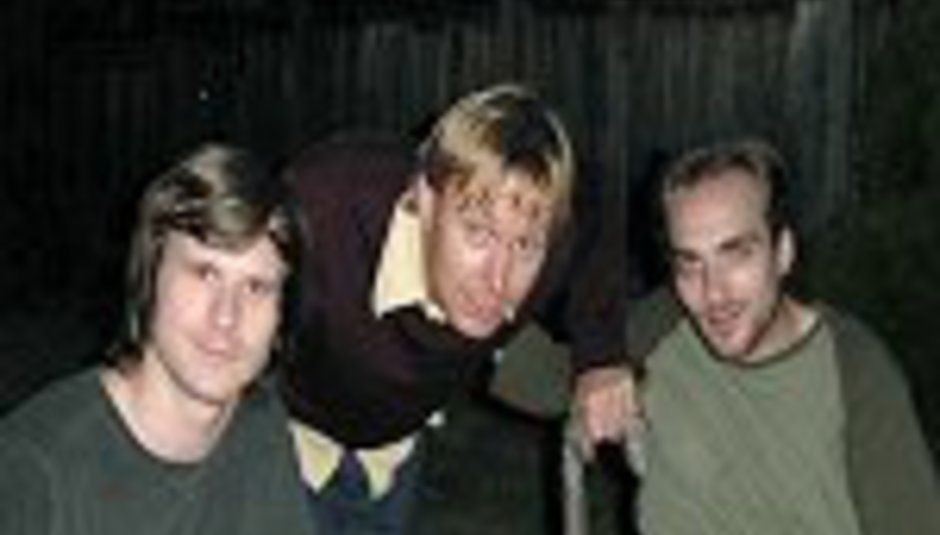 by [redacted] October 17th, 2003
It’s the new chapter in the life of Jeremy Enigk, William Goldsmith and Nate Mendel. As former members and founders of Sunny Day Real Estate, they’d recorded five albums, including the second-biggest seller on Sub Pop (‘Diary’, only beaten in sales by Nirvana’s ‘Bleach’). After a rocky ten-year on-and-off relationship, they split for good. Out of the ashes rises The Fire Theft on their new home of Ryko, set to drop their self-titled debut, owing influences from Pink Floyd to Led Zeppelin to Brian Wilson.

The debut album (*reviewed*) is released in the UK on Oct 20th. It’s darker than what SDRE fans will be used to, and the band tell DiS they’re relieved it’s finally out…

DiS: When you started as Sunny Day Real Estate, you only send one photo to the press. How do the promotional ideas contrast for The Fire Theft?

Nate: When we started Sunny Day we were really naive about the business end of things, in the best possible way, and just wanted to do everything in a unique and different way. Everyone puts out photos and does interviews, and we just wanted to see what it would be like to put music out and go play live, and let people experience it on their own, keeping a sense of mystery about it. Try to commercialise it as little as possible. And, erm, that was a long time ago. Heh heh heh. Now things are a little more conventional.

DiS: So you weren’t trying to do anything clever then, you were just naïve?

William: Not naïve, we just consciously made a decision… we don’t wanna do interviews cos what each individual person has to say is not what the music says as a whole. The music we made together was what people wanted to hear, not what we had to say in an interview.
N: There was some naivety there but that wasn’t a contributing factor to what we did. We definitely felt that having pictures of the band not playing was silly, cos what we do is play. Just taking pictures of us standing there seemed silly to us. You know, 10 years down the line it’s like – let’s take some pictures. It’s not as big of a deal. I still stand by it though and think it’s rad we did it that way. Now we’re more mellow…
W: It makes it difficult to go and play in Japan if you don’t do that.

DiS: As Sunny Day’s career matured the band seemed to become more introverted or reclusive. How would you describe the current state of play at the moment?

N: What? When we started doing interviews and photoshoots it seems we’re less introverted.
Jeremy: Well lyrically, initially I think ‘Diary’ was a little more obvious on a musical level, and lyrically the later stuff became way more poetic and harder to put your finger on what was being said. But with The Fire Theft now it’s more extroverted in, y’know, its honestly.
N: Oh you mean lyrically introverted?
DiS: Interpret it how you want, heh heh.
J: That’s the way I’m looking at it. Yeah, as photoshoots and interviews we’re definitely not introverted.
N: On all sorts of different levels that question could be answered. Hahahaha! I dunno.

DiS: How do you see the current emo explosion relating to grunge in the past – in the very loosest sense of the words?

W: I think the word ‘emo’ is silly. It’s funny, because, I’ve said this a million times but music has been emotionally driving since the beginning of rock ‘n’ roll, blues, jazz, everything. Saying that’s a new form of music is silly, so I don’t really know. I’m not really too familiar with the bands categorised as emo, so I don’t think I could compare it to the grunge explosion at all. I have no idea! I’m from Seattle! [shrugs apologetically]
J: It’s easy to put things in a category for people to buy it or just understand what it is.
W: Ultimately you’re describing something that’s a complete abstraction, it’s in the air, so you’ve gotta call it something and that’s when you end up with corny words like emo.
N: Didn’t people call Pink Floyd a rock’n’roll band?
J: Psychedelic.
N: Wasn’t it just like Pink Floyd and The Who and Led Zeppelin, Creem… weren’t they all like totally fucking different from each other?
J: Yeah but that’s just another way to describe it.

DiS: At what point did you decide that The Fire Theft should be The Fire Theft and not just another Sunny Day Real Estate album, and what way has the writing process differed?

N: We wanted to start fresh, so it’s a completely new band and name. Writing process is different, and similar… I dunno…
J: It’s kinda still being discovered. We did a lot of demo recording, basically, what we thought was a demo at the time. This latest album is really a recording project that just kept piling on new ideas until it finally became an album. But as a band getting together and playing together, we haven’t really explored that much because of other circumstances, we haven’t had the time to get together. So it’s still yet to be explored, the writing. It’s a discovered, it’s something we have to find and we’re looking forward to finding.
N: I can see us recording 40 songs for the next album and then going, which of these do we want? That’s something that could happen.

DiS: When did you start recording this album?

N: About two years ago, maybe longer. It was kind of a difficult, convoluted struggle to get it done. Super-tight budget. William took out a loan to do it until we got a label. We got a producer who was good and would do it for little money, but we had to work to his time schedule. There was scheduling problems… Jeremy would do a score, I would run off on tour and it just drug on, and it’s a tremendous relief to have it done and turn out well.
W: Even though we don’t feel like it’s done!
N: At some point it was like – someone’s got to put a stop to this! And the record was done.

DiS: How are you going to approach the next record?

N: We’re probably not going to spend two-and-a-half years on it, let’s leave it at that!
W: I would like to record it live.
N: I would too. The way people used to do records. That was great. You did demos and had an idea what you wanted it to sound like, then you’d all go in and play it at the same time. I don’t care if there’s mistakes. William’s an awesome drummer but I don’t care if the time fluctuates. It just doesn’t matter.
J: That’s the best way of doing it.
N: We did it with one song on the record and we didn’t know it was gonna be the take. You can hear it – it’s all over the place. But it’s grrrrreat that way.

DiS: Were you surprised when your first tour almost all sold out? And how do you relate to your loyal internet fanbase?

N: I’d say that’s why the shows were mostly sold out. If it weren’t for the internet it wouldn’t be as well attended.
W: Absolutely.
N: So thank you for coming and going on the computer. Heh heh heh.

DiS: Jeremy, you released an album called ‘Return Of The Frog Queen’. Do you have any plans to further the groundwork laid by that album in terms of solo albums?

J: Yeah, I have two more solo records on Sub Pop I’m supposed to do, so I’m gonna do them one day when there’s time.
W: That’ll be the other half of those 40 songs we’ll have recorded.

DiS: How does it compare to the Fire Theft?

J: I’m hoping to bring more of the solo element into The Fire Theft, because it’s all music and what I love. I think that it’d be good to bring that in so that it can be more personal to me. It was a lot lighter, musically.

DiS: Many people would describe you as a cult band. If you had to pass your experience, success, acclaim and status onto any of your peers, who would it be and why?

W: I can’t think of anyone to pass that onto who hasn’t already done that. I’m not really abreast of current music as I should be.
N: Yeah, everyone I’m thinking of has done that, so… Good job, everybody!

The Fire Theft’s self titled debut is out on Monday 20th October.

Thanks to Ross Morrison for the help with this one. Cheers, dude!