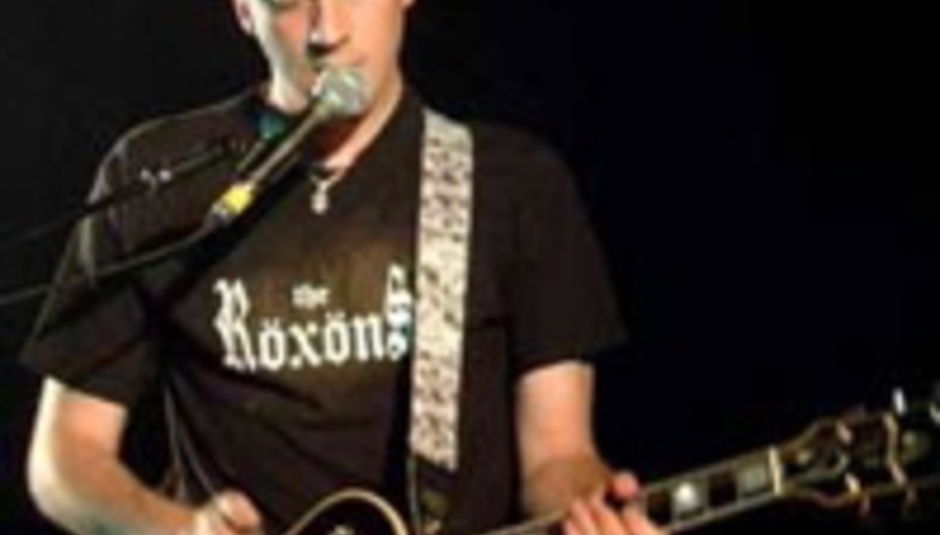 Stepping off the train at Leicester station, I'm handed a free sample of cherry Coke. As I head for the Student's Union, sipping the lukewarm beverage as I walk, it strikes me that Graham Coxon and this particular flavour have something in common. They're both household names, but not necessarily in their own right: when you think Coke, you think traditional Cola. In the same sense, it's impossible to mention Coxon's name without the 'B' word cropping up.

To recap, he played guitar in Blur until 2002, leaving to pursue a solo career away from the glare of the spotlight. A much publicised stint in rehab for alcohol addiction soon followed before 'Kiss Of Morning', his first post-Blur solo effort. Along came 'Happiness In Magazines' in 2004, and Coxon was again catapulted into the public eye courtesy of the punky and popular 'Freakin' Out'. His latest work, 'Love Travels At Illegal Speeds,' continues in the same vein with a similarly catchy lead single, 'Standing On My Own Again'.

Sat in the Union bar, I'm informed by a member of staff that the arrival of Coxon's tour manager is imminent. An hour and several flicks through today's Times later, I'm ushered into the dressing room and find myself in the presence of Coxon, his tour manager and two of the band who all remain throughout the course of the interview. He looks tired, and perhaps a little bored, but he's still polite enough to offer me a glass of orange juice. I decide to keep the Coca Cola analogy to myself...

You play all the instruments yourself on the new album. Isn't that making yourself four times as much work?
I get very bored in studios if I'm not doing anything. I spent a lot of time waiting around with Blur and I just couldn't deal with it any more. I demoed everything myself and just thought I'd do it. I don't know if it'll always be that way but I've just got into the habit of it. I'm a control freak. At least I can't blame anyone if it's rubbish!

Do you think fatherhood's changed your approach to making music?
I can draw on certain sentimentalities. Most of the songs start off being about my daughter but end up getting miscontrued as being about girls. Kids are good to sing to, 'You And I' started off with me singing to my daughter in the bath but listening to it now, its a relationship song.

Do you find it difficult to write and sing personal songs like that?
I find it too easy to write them! I try to write about other stuff but it's quite difficult. It's hard to sing 'I'm so in love with you' but people do say that sort of thing, I just have to get over it, forget about my hang-ups. I'm a bit hung up about it, supposedly. It's nothing new with my stuff, though. 'Coffee and TV' was the same and 'Bittersweet Bundle Of Misery'. They're all about that, really.

The last couple of albums are a bit more immediate than your early solo work – was that a concious decision?
It's just a result of getting better at writing songs... or maybe I'm getting worse because they're a bit poppy. Once you discover you can write a pop tune in the vein of the late 60s, early 70s its quite enjoyable. But I don't really like pop music these days... it's like farts: you don't like other people's but you quite like your own. A bit crude, but it's kind of like that. I don't think I'll stay around in that area for too long though. You can even be overpowered by your own!

So the next album might be very different?
Yeah, I think so. I've been working on picking styles and I'd like to try arranging different kinds of instruments. I've been playing a lot of acoustic guitar, I like pedal steels and things. I like some country music, but the road I want to go down is fairy music. I don't know what it sounds like, I've got to figure that out. It's incredibly high pitched! I've always had this love of psychedelic music. Although I include stuff that's quite ear tickling in my music, I'd like to take it further. 'Magazines...' fell short on a couple of things and I wanted to really nail that area of songwriting. There's not much of a development between the two records but they're almost like one bit of work. They were written within a year of each other.

Can you see yourself working with any other producer than Stephen Street?
I'd like to work with a lot of producers but it's just having the courage. I'm quite happy with Stephen. He's very consistent, whatever mood you're in he's always solid. He's quick, professional and clean which is important because I'm not very consistent mood wise. We tug each other, I tug him out and he tugs me in; we align at some point. Producers don't know everything, I think they need challenging all the time otherwise, like anybody else, they just slip into crappy habits.

Looking back in hindsight at the mid nineties, what are your thoughts on Britpop?
It was desperately English. Grotesque, really. Blur were a little bit bogged down with this sort of mock Tudor world, a caricature. You can't tell the difference between some English and American bands these days. I'm not sure if that's a good thing or not. I thought maybe my stuff might get popular in America because of it but now I don't care. I don't want them copying English music. I like the Arctic Monkeys singing in broad accents. I suppose that's why I use stupid words like 'daft' and 'flipping heck' because I'm a bit sick of the things like buzz words, catchphrases, sound bites. That's so American, it's all disgusting. I stick to using the vocabulary I had when I'm twelve. The less they understand the better.

Bands seem to be consciously ripping off the Britpop 'sound' these days. Would you agree?
I don't know how original you can get now, with pop music. it's too much of a proven formula. Blur were interested in The Kinks and Wire, with a bit of American stuff thrown in. I don't know how consciously bands are ripping off Britpop. Personally, I'd like the early 70s to get ripped off, people to make Pink Floyd style albums and electric folk records. You can't get much more English than LSD and electric folk.

Is there any contemporary music that inspires you?
I listen to stuff now on the radio and think 'yeah that's fine' but it hasn't changed much over the last three years. It's settled into post-punk, Gang Of Four, Joy Division thing. It's alright but I do wonder what's next. I don't know what makes me write, but then I don't know what makes me draw pictures, either. It's like when you write in a diary, you don't have to be a fan of anybody else's diary to do it.

How's life in London? Does Camden still feel like home?
I've lived in Camden for about ten years now. It's changed a bit, got more dangerous, perhaps. Or maybe I've got older and because I've got a child it amplifies danger. I used to walk around drunk all the time so maybe it didn't feel dangerous. Some of the nice old character has been knocked down but really it's the same place. I wouldn't particularly like my daughter to grow up there but you can't really write scripts about the future. If I could, I'd be married with three kids and a dog and a cat living out in the country and I wouldn't be where I am now. You just deal with things as best you can.

You celebrated your birthday earlier this month. Have your thirties been better than your twenties?
In a way my thirties have been better. My twenties were competitive and a bit messy. I was in a position that many people would envy but it was difficult to grab hold of it. It was such chaos. Being sober is a lot better than being in a mess all the time. It was quite an exciting mess but it was still a mess. You can have your twenties again in your thirties and just be a little more stable.

So quitting the booze helped with your development as a solo artist?
The improvement was leaving the group, not getting sober. It felt like a weight had been lifted, there was time for relaxation and the songs just came. 'Freakin Out' and 'Bittersweet Bundle Of Misery' came pretty soon after that. I wasn't making effort, songs just appeared. It was a surprise to me! I thought I might as well tour and record them properly, I knew I'd regret it if I didn't. There's still plenty of time for recording albums in five days.

Are you satisfied with your current level of success?
I'm quite happy with it. I'm not bothered about ramming my records down peoples' throats - I'm happy if people buy them and I'm happy playing to people who like my stuff. I spent a lot of time with people who were eager to conquer the world and make themselves a huge band but I'm really not interested in that nonsense, there's an awful lot more to life than being popular. I think my music's pretty good. It's not the worst, it's not the best but its doing its job as far as I'm concerned.

The tape recorder is switched off and we talk about festival plans (there are none) and the new Pink Panther film (the old one's much better). His initial reticence has worn off, and what could have been a tricky interview has turned out fine. In the flesh, Coxon is everything you'd expect: shy but articulate, lethargic yet passionate and much more relaxed these days.

It's clear that he enjoys playing live far more than talking to journalists, but who can blame him? All they ever seem to do is ask about Blur (which is why DiS didn't – at least not directly) and a possible reunion. I, for one, would much rather see him out on his own, making albums at his own pace. As the train departs Leicester station, I'm left to reflect on meeting a national treasure and whether that opening analogy could be a hanging offence...