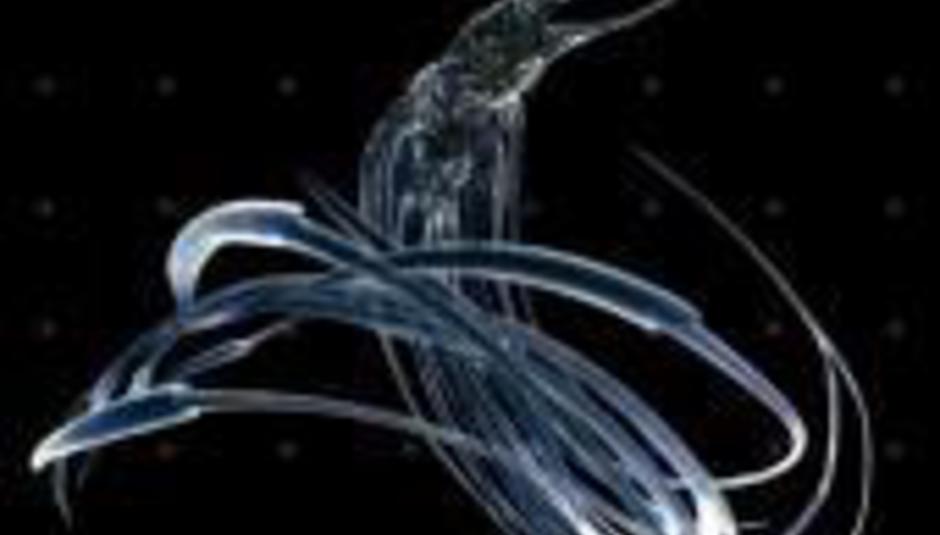 March sees two British bands of no few column inches release their latest long-play wares; indeed, both albums in question – Fightstar’s debut Grand Unification and Hundred Reasons’ third album Kill Your Own – are available from your local contemporary phonographic emporium at this very minute. Both albums have been subjected to much critical scrutiny, one because of its central protagonist’s desperate desire to claim back credibility from the jaws of the pop-rock beast that spawned him, the other because its authors were unceremoniously dumped from their last record deal and now need to deliver a record to back up their obvious displeasure with the workings of the industry. Both are similarly emotive in their rocking, although to call either an emo record would be inaccurate. DiS, never ones to miss a trick, here pitches one against the other in an attempt to squeeze a feature from a pair of pure reviews. That, and because we’re bored, simple as.

Fightstar’s initial thirteen-track foray into the world of the rock album is a mixed affair, although that was always going to be the case: two years in the making, key writers Al Westaway and Charlie Simpson have been moulded by a flood of different influences, from American nu-emo to Japanese monolithic post-rock. The consistent riffs underpin the contrasting styles from track to track – to call them epic would be an understatement – and muscular rhythm section work courtesy of Carcass-loving bassist Dan Haigh ensures that Simpson’s frail voice is always backed up by something a little meatier. Come track six, ‘Build An Army’, initial fears of Grand Unification proving to be no more than weak fodder ready for a critical lambasting are starting to wane.

Track six of eleven on Kill Your Own (pictured above) is an even mightier affair than Fightstar’s similarly positioned effort: ‘Live Fast, Die Ugly’ is one of a couple of songs on Hundred Reasons’ latest that highlight the Surrey quintet’s return to rockier waters. A simple, distorted opening riff is demolished by front man Colin Doran in a truly attention-shredding manner: his opening line is absolutely indiscernible, such is the absolute anger that bleeds torrentially from every syllable screamed from beneath his still-significantly-bouncy barnet. The second-shortest song on the album, its chances of ever making it to single status are slimmer than Simpson’s chances of convincing Sepultura-tattooed hardcore types that his band’s debut is worth buying. The albums vary greatly in terms of their openings, too: Kill Your Own rumbles into life with a fuzzy wave of disorientating white noise, droning its way from speakers unprepared for such a curtain-raising first scene. When the initial riff of ‘Broken Hands’ kicks in, the effect’s similar to that of ‘Travel By Telephone’ from Rival School’s United By Fate album: wake the fuck up, people, and rock some. Doran does make things clear, vocally, that the thunderous opening won’t be maintained across the next ten tracks though: “Don’t think I am so naïve to be fooled by these smokescreens,” he shouts. Although his ambiguous lyrics can be read a variety of ways, the listener can take such a line to mean that a return to the band’s melodies of old will come their way soon enough. Fightstar open their effort (pictured right) with something of a cliché: a slowly uncoiling number by the name of ‘To Sleep’ succeeds in disarming the listener somewhat with its meandering atmospherics – delicate string plucks and crisp post-rock arpeggio – but is as hackneyed as doubters would no doubt have hoped for prior to pressing play. Single-before-now ‘Grand Unification Pt 1’ sets the tone a little better, glossily produced pop-rock given a harder edge by a Deftones-like down-tuned breakdown two minutes in. Part of the credit in crafting such wondrously, unexpectedly heavy moments must be directed the way of producer Colin Richardson – with previous clients including Slipknot and Machine Head, you’d have placed a sizable bet on him turning Fightstar’s recorded output at least into something worth covering in the most metal of magazines, even if only to knock it a little for its compositional predictability. ‘Waste A Moment’ follows in similar fashion, guitar levels peaking exactly where they should, with Simpson’s multi-tracked vocals fleshed as fully as they can be without the band having to employ a new singer entirely. Throughout Grand Unification, Simpson’s limitations as a front man become apparent: the man, although brimming with enthusiasm for his current project, is clearly out of his depth, and range, more often than not, and the faux-American accent that creeps in occasionally is just ridiculous.

Range is no problem for Doran: aficionados will already know that he can half-carry a note decently enough, but on Kill Your Own he concentrates on his strengths, i.e. he shouts, a lot. This is a Good Thing, as the occasional terrible lyric (really, Doran’s penned a few stinkers) is made up for by an electrifying delivery. Thus, crap talk about condensing a lifetime into an hour during the first verse of ‘Destroy’ is forgotten once he begins shouting out the mega-sized chorus. At their most accessible on Kill Your Own, it seems incredible that Columbia let Hundred Reasons slip from their grasp, willingly. The sole single thus far, ‘Kill Your Own’, is a magnificent slice of bombastic radio-friendly fraught-rock. Whether or not Doran’s alluding to the period when the band’s then label was in the process of splintering their relationship when he sings “We watched the blood boil and we still smiled” is uncertain; that he’s quite obviously pissed at the whole ordeal is absolutely evident through his at-the-microphone vitriol. During ‘A Better Way’ he sounds about an inch away from the listener’s ear, particularly when, like the break in Fightstar’s ‘Grand Unification Pt 1’, the song shifts gear into a slavering behemoth of a down-tuned beast roughly forty seconds from its close. Again, exact words are buried under an avalanche of amplified aggression.

In terms of stylistic departures from the expected, Kill Your Own provides few. Songs are of a consistently high quality for their ilk, and album-applicable adjectives that spring to mind include such delights as ‘solid’ and ‘coherent’, alongside ‘return-to-form’. Predictable enough, for sure, but considering what’s come before this third album, Hundred Reasons have produced a sterling record that’ll find the band fans anew as well as pacifying those that took them to heart back when ‘Cerebra’ tore a mammoth hole through to British rock’s inner circle. Fightstar, keen as they are to appeal to a broad spectrum of rock fans and thus gain that still-elusive credibility from such fraternities, do try their hand at a song not entirely in keeping with their regular output, i.e. US-influenced emo-rock regurgitated with Suffolk accents. ‘Mono’, named after the Japanese band of the same name, picks up from where ‘To Sleep’ left, album mood shifting from one of flash-in-the-pan fury to something approaching sombre introspection; to something that’s designed to tick a few more boxes on the band’s wallchart of wear-them-on-our-sleeves influences (beside their hearts, that is). ‘Mono’ fails to emulate the act that inspired it, though, as it can’t match the explosiveness of the Japanese quartet. Four minutes in, a hush descends: you know the calm’s about to be shattered into tiny fragments by an almighty storm, but when the eruption comes it’s more comparable to a lawn sprinkler than the hoped-for geyser. It’d be forgivable – still a pleasant song well worth nodding along to – if only Simpson didn’t come screeching in with vocals best suited to a pre-teen Funeral For A Friend covers band. If there’s one criticism that has to be directed at Fightstar’s debut, regardless of overall personal opinion, it’s that Simpson needs to be lower in the mix. That, or he should consider some vocal coaching.

So, how do the two records fare, in out-of-ten terms? Kill Your Own is certain to stand up to the onslaught of criticism that’s bound to come its way from fans disenchanted with their second album, the under performing Shatterproof Is Not A Challenge. It’s not as immediately grabbing as Ideas Above Our Station, but in all honesty a complete regression to such a state would be unwise: by taking just one step back, the band have gone a good few forward. With their own Larry Hibbitt on production duties, Hundred Reasons have produced an album they should feel extremely proud of, and it’s one to build upon with new label V2 backing them. That’s a good 7/10, then.

Fightstar’s Grand Unification will take certain parties by surprise. Although it’s obviously not the complete departure from the B-word that Simpson would like it to be – pop melodies play just as key a part on this record as they did on any B-word long-player – it does suggest that the band’s next record, one that will be recorded without such intense scrutiny from all corners of the press, music and beyond, could be something special. There are suggestions of talent beyond the all-been-done-before core of Grand Unification, and if these traces of intelligence above the base level required to play music like this are developed, Fightstar could yet convert even their most hard-line doubters. Well-produced and accomplished enough within its field, it’s worth a 5/10.