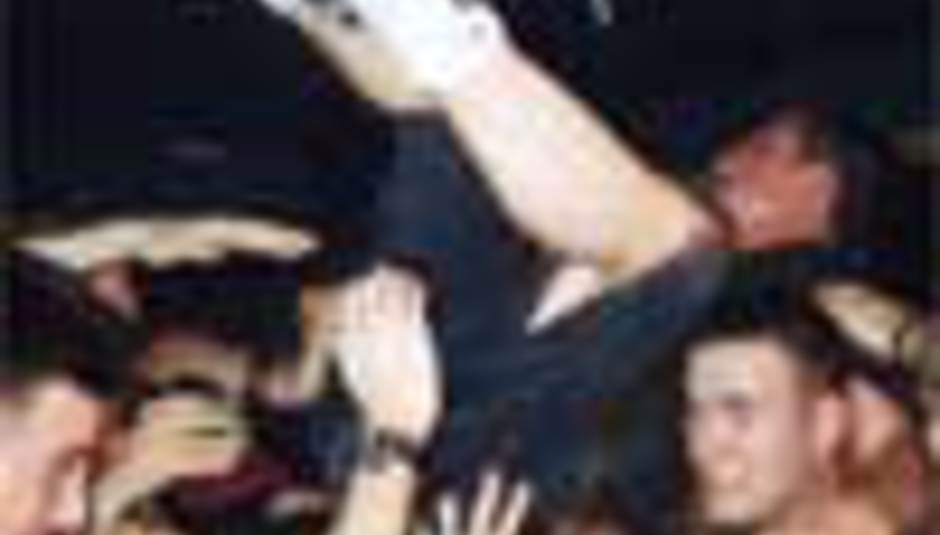 by Ed***d Mellett May 25th, 2003
I’ve been given the chance to interview Stampin Ground and to be honest I’m a little scared. In the band photo before me five angry, grizzly and (possibly more worrying than anything else) very, very stacked human beings give me evils whilst I try to scribble together a few questions on a dog-eared piece of paper.

I'm relieved then to meet Adam ‘Bomb’ (vocals) and Scott ‘Axegrinder’ (guitars) calmly eating pizza in the Manchester University Union bar; and vegetarian too! These keen animal lovers are just as stacked as in their photos, but it turns out that they just love to go cross country running! Phew! Could I be any luckier? Well, yes! It just so happens that Stampin Ground may well be the nicest guys on planet Earth, which might just be the reason that they gave me this interview.

What were the reasons you came together as a band and why did you start playing music?

It was a concept born out of the late '80s/early '90s hardcore scene with a progression towards something more metallic. Both myself and the bassist thought about all the heavy stuff around at the time and thought we’d try to incorporate it in our sound.

What were your influences?

Everyone’s into different stuff really. I guess directly we’re mainly influenced from the American hardcore bands; Inside Out, bands like that. As different band members have come in to Stampin Ground they’ve all influenced us in different ways.

Was the recent UK tour with The Haunted any good?

Well it was pretty much sold out so quite good! It was quite a different audience for us. The death metal crowd is quite an obvious audience but one we haven’t played to that much. It’s good for us to play to lots of different people so it’s been a good tour.

How come you got to play with The Haunted?

They asked us to. A lot of bands if they want a more hardcore style band in the UK will come to Stampin Ground. There’s not that many British hardcore bands around that are a draw so we’re kind of an obvious choice really!

What was it like playing with uber contemporary metal boys Sikth?

Metal Mikey’s cool (singer), their attitudes are kind of different though. They’re all really nice guys, but they’ve got management stuff and they’re all totally manipulated by what the management say, which I think is fucking gay. Not to say that they’re not great guys but lets just say I wouldn’t let a middle aged man in a suit tell me what to do!

Nice work getting on the Soulfly tour too!

Soulfly are cool and there’s a lot of nice guys in their touring team too. They forced us to raise the price of Stampin Ground t-shirts though so that ours cost more than theirs. It’s a bit of a shame seeing as that’s where most of the money comes from on tour.

I don’t think so. We’re quite out on our own really and we’re not really a part of that. Basically we’ve been playing hardcore music since 1995 and we haven’t really changed direction since then. The bands it affects are those that have a huge injection of cash suddenly and are forced down people’s throats. The audiences who go and see them are bigger but more fickle. There’s nothing wrong with that but I think the way we’ve built ourselves up is better – a more traditional way - because our attendance has steadily grown on its own and continues to do so.

How does the media affect you?

It took us ages to get the mainstream press to take any notice. We do all right now. The minute the press coverage began we started getting people at our shows. We’re into the DIY ethic. We never really got any management, and we’ve only recently been dealing with any kind of promotional stuff. We still don’t have management so we’re still doing it all pretty much ourselves. In many ways its automatically going to take you longer than bands that have managers so basically we’ve got to where we are today through the old fashioned hard graft. We did it all basically!

What do you find they are any down points of touring?

Most of the down points don’t affect me really. I’m pretty dirty anyway so not having a shower’s not a problem! Touring used to be hell! Every band we were with wanted to kill our old drummer, and to tell u the truth so did we! But now it’s easy. Our drummer now is great!

The new album’s all written now. We’ve been doing a lot of writing and not touring very much recently. We’re doing pre-recording now. It’s a lot more focussed; heavier; more mature; more brutal and we’ve spent a lot more time on it. It’s gong to be produced by a big name producer too – Andy Snake! It’s going to sound amazing!

This time it’ll be a world-class album rather than just us doing it on the cheap, doing it the best we can. We’ve spent so long writing it. Andy’s really going to push us production wise too.

Wasn’t the album supposed to get released in 2002?

Cool. Your last album did pretty well for itself didn’t it.

Its going to be kind of hard going up against the rave reviews of the last album though! Its weird; we had a chat with a guy from Kerrang! who’d given us a 5K! review for it and he said “well don’t expect me to give you 6 out of 5 this time”. Its quite strange going up against ourselves like that. We still have to prove ourselves basically. I think the songs are better this time though. We’ve really worked with the strengths of the band, rather than… the weaknesses!

Great! When can I get a copy?

Realistically July. Record companies don’t like to release anything in July though.. Records that get released then don’t sell but we want it released then so we can play festivals. You stand a better chance of getting on the line up if you’ve got a new release. Theres a few festivals in the pipeline but nothings confirmed yet, festivals don’t like to commit until you’ve got a concrete release date. (SG have recently confirmed at Download)

Whats your favourite festival to play at?

Donnington would be wicked. Download would be good. Reading and Leeds would be excellent!

Think I’ve run out of questions!

I haven’t started the first one!

Well, do u want some of this stuff then?

Czechoslovakian herbal liqueur! Two guys came backstage a while back and we let them wrestle each other in our dressing room for amusement! It was a little scary at first but they were actually nice guys and gave us this as a token of thanks! Want some then?!!

No. Not right now. Goodbye!