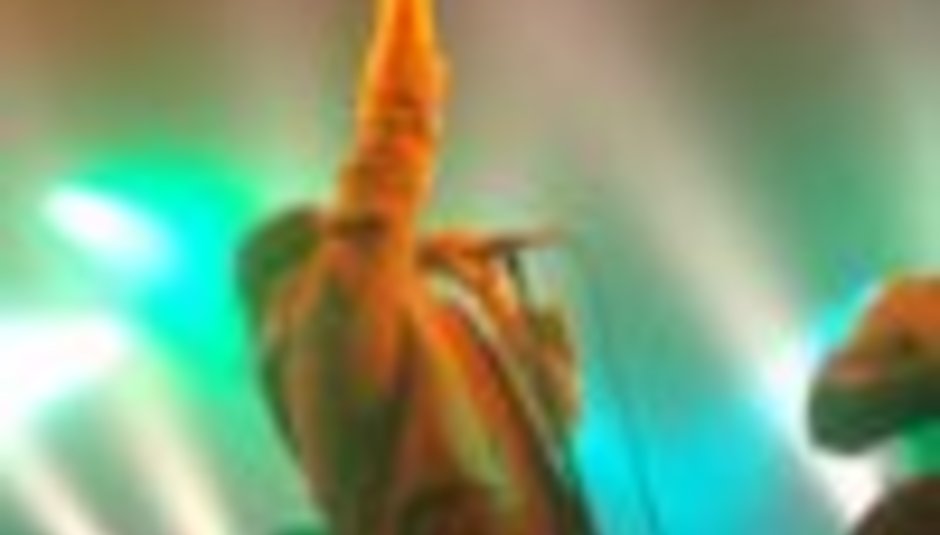 When I started work at seven, the initial rush to get in was a bit underwhelming. I was surprised that there was no queuing outside as well - though apparently all the cool kids arrive fashionably late. I finished my shift early and caught all but the first ten minutes of the show.

Sat in a comfy chair after the show with a friend, I spy bassist, Disco making a dash for the cigarette machine. I accost him in the manner that I do and he's more than keen to invite us to the dressing room when he sees the girl I'm sat with. After brief faffing about while he finds a beer, he grabs guitarist, Surge Joebot and we depart outside for a bit of quiet.

Almost immediately we’re asked if we want to go to the bathroom or something, or is the balcony cool? Innocent and naïve as I am, Disco explains to Surge Joebot that it's an interview, not drugs.

'Damn man, I thought we were getting drugs.'

After about five minutes chatting about shitty English journalists, MTV2 and the new album I sit down and gather my thoughts. Here are the highlights.

DiS: So do you not feel that starting a UK tour, with just one single out is a bit risky?

Surge: 'I guess, but hey fuck it man, we’re just doing what we do. We play our music, the crowds love it and that’s good.'

Disco: 'It is a bit weird touring before the record's even out, but it's working out OK.'

DiS: Do you not feel as if you are a bit of a one hit wonder group? The videos you put out are quite memorable, and the songs are catchy but do you not worry that you may be seen as almost a novelty act?

Disco: 'Yeah, people say what they want, you know.'

DiS: Is this a long term career, or is it more of a one album project followed by countless side projects?

Disco: 'Whatever comes, comes, you know? We started out like seven years ago, and here we are. If it all ends tomorrow then fuck it man, it's been fun, but I’m in it for as long as it lasts'.

DiS: Is the English media a big factor for you?

Disco: 'Yeah, it’s good that the videos are popular but that’s just a small part of it all.'

DiS: Just what is the deal between Jack and Meg White?

Surge: 'Hah, it’s old news now. They were married. Now they’re not. Jack used to introduce Meg as his wife and the crowds were like “aaah”; now he introduces her as his sister. I’ve known them for a while and it’s no big thing you know, they’re American, that’s all.'

DiS: I was surprised by the number of people who knew most of your songs, especially since the album isn’t out yet.

Disco: 'Yeah, that’s pretty much been the case since day one.'

DiS: I guess the internet starts that?

Disco: 'Oh yeah, people know our shit out there. I hope they all buy the record, but if they hear it then come to the show that’s cool.'

DiS: Are you surprised by the turnout? When I got here the venue was empty but it filled out nicely.

Surge: 'No, no, it's been that way all along, it's been such a big deal us coming here. It's like in Detroit we play to crowds of two to three hundred, and here it’s like huge, but then it’s huge any band from Detroit playing here. I mean we have a good scene in Detroit, we invented rock, but it's small scale you know? Coming to Europe is like 'oh my God'. A local band going to Europe is just the biggest thing.'

DiS: Do you feel that MTV2 and the like have boosted your career with your videos on endless repeat?

Surge: 'So what if they have? People like our shit and if they don’t they can fuck off. I don’t care what people think of us. Here we are.'