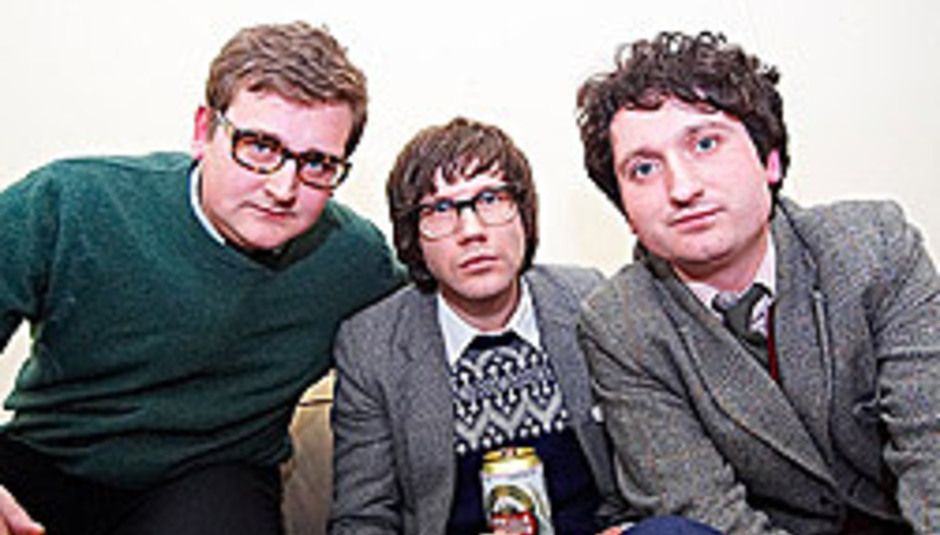 In case you didn't know, The Young Knives are a three piece rock band hailing from Ashby-de-la-Zouch. They started their musical career playing covers of Neds Atomic Dustbin songs.

Quickly realising the error of their ways, they relocated to Oxford and released mini-album 'The Young Knives Are Dead' in 2002 on local imprint Shifty Disco.

Those recordings came to the attention of BMG, whom the band inked a publishing deal with, and the fledgling Trangressive Records label. Both, presumably, were impressed by their combination of classically English songwriting sensibilities with wiry punk hooks. Either that or their decidedly 'individual' dress sense.

An EP, 'Junky Music Makes My Heart Beat Faster', soon followed and sold out. The band started work on their debut album with Gang Of Four legend Andy Gill and released a single, 'The Decision', in December 2005. DiS meets the quirk-pop trio before their Sheffield gig in support of latest release 'Here Comes The Rumour Mill' and finds them in jovial, if cantankerous, mood.

What's the most annoying rumour you've heard about yourselves?
Henry (guitar/vocals): The NME said we looked like paedophiles which isn't very nice... it's interesting if that's good journalism.
House Of Lords (bass): Our reaction was, "No we're not!"
Oli (drums): Then the lawyers got involved.
Henry: They didn't really.

The NME have been pretty harsh to you, haven't they? They didn't seem to like the new single...
Henry: I couldn't work out whether it was a good review or not. They always say our vocals sound like The Darkness which is really offensive.
House Of Lords: It's because they've got no other reference points for slightly falsetto vocals
Oli: We were thinking more like Supergrass with the high harmonies.
Henry: The bands we listen to like Adam and the Ants, Sparks and Devo all do that. They're all ten times cooler than The Darkness. We like stuff that's quite English. We're not just into garage rock bands.
Oli: But we like them too. Is there anything contemporary that inspires you?
Henry: We like Mystery Jets. They're more than just a guitar band.
Oli: Larrikin Love are interesting, too.
House Of Lords: We like stuff that's a little bit different. Have you heard The Noisettes at all?
DiS has and wasn't too impressed
Henry: They're still a garage band but every so often they go off into a sort of jazz-rock thing. There's some soul in there, too. She reminds me of Billie Holiday.
House Of Lords: Interesting voice, good stage show... sexy body.

Any thoughts on the Brit Awards?
Henry: Load of wank. Sack of shit.
House Of Lords: It's just a load of industry types patting each other on the back isn't it?
Henry: It's people like Damo Suzuki who deserve acclaim, not people who are commercially successful. He's been on an endless world tour for years. He picks musicians from each city he goes to as his backing band and then shouts over the top. It's all improvised.
Oli: You got asked to play bass for him, didn't you?
House Of Lords: I wouldn't do it. I wouldn't want to play a duff note in front of Damo Suzuki, he'd be like (cue awful Japanese accent): "What the hell you doing?"
Oli: Good impression, though.
Henry: Yeah, a bit like Benny Hill...

You're working with Andy Gill on your album. How did that come about?
Henry: We sent him some demos last year and he called us and said, "I'd like to work with you".
House Of Lords: It was nice. It wasn't our label calling him and offering him squillions of pounds, he wanted to do it.
Henry: So we got a loan and did it.
Oli: He even gave us a mate's rate.
Henry:Yeah, but his idea of a budget rate is different to most people's. What did he bring to the recording process?
House Of Lords: He's got a great ear. There's one guitar part we wrote and we had this really complicated thing. He just said, "Why don't you break it down?" He simplified it to two drawn-out notes, and you'd never think to do that because it's too pretentious.
Henry: But he did, and it sounds really good. It creates a tension and he's really good at that. He's also good at making us put the chorus in the right place. We always want to leave it until the end but he said, "The chorus is the best bit, put it at the start and repeat it again and again".
House Of Lords: That makes it sound really formulaic... but it's not!
Henry: It's just about highlighting the best bits, like Gang Of Four. People always say they're a big influence on bands like Franz Ferdinand, but they write finely tuned pop songs that are about as Gang Of Four as the Tweenies. And Bloc Party are more like an emo band.

You're releasing the album on Trangressive Records. What made you choose them?
Henry: Well, they made us the first offer and we'd worked with them before on an EP. They'd come to a gig, liked it and wanted to put something out. And they let us do what we want, pretty much.
The House Of Lords: They're both musicians and it's refreshing to work with people who are that enthusiastic about music.
Henry: It's better to work with people like that than labels with 4,000 bands on their roster who don't necessarily care about your music. The album seems to have taken a while to make... any particular reason for that?
The House Of Lords: We wanted to do it properly. When we sat down with Transgressive they asked us how we wanted to do it and we didn't want to be one of those bands who do a couple of singles, like Hard-Fi, and then release an album with posters everywhere.
Henry: We wanted to release lots of singles, tour them all and play everywhere so that people had actually heard of us before the album came out. We saw a massive poster of The Kooks the other day and thought, "Who are they? That's a bit distasteful".

What are your festival plans for this year?
Henry: We're doing Reading and Leeds, also V Festival and maybe T in the Park. Then some smaller ones like Guildford and Truck Festival in Oxford.
House Of Lords: They really are the good ones. We did V last year and although it's good to walk out on a big stage you get much more of a response at little ones like Truck.

Finally, and I know you must get asked this all the time, what's the deal with the name 'House Of Lords'?
Henry: I like to make up new explanations all the time. My current favourite is that when he lies on his back his profile resembles that of the House Of Lords.
House Of Lords: But that's not true.
Henry: It's just a joke because he's an idiot and he always says our ideas our rubbish, just like the House of Lords does. That was the idea.
Oli: But it's got horribly out of control.
House Of Lords: They hate it because they gave me a wacky name and now that's the thing that everybody remembers about us. And I get all the girls...

We suspect, dear reader, that he may be lying. The Young Knives' debut album is released on Transgressive Records in May.

The Young Knives play the Drowned in Sound party in New York (The Annex) with Brakes on 21st February.