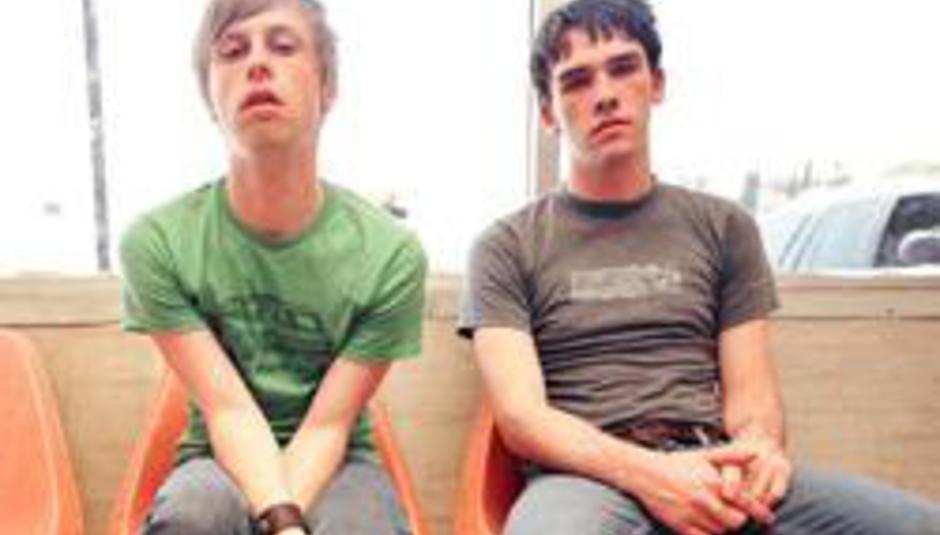 I catch up with avant-electro-rock two-piece (yes, that's the best I can do) Idiot Pilot - Mike Harris and Daniel Anderson - in a back room at Sheffield's Corporation venue. Helping myself to one of six oranges laid out for the band, along with a similar number of potatoes, it seems they've had as many problems reaching the gig as I'm having trying to make my MP3 player an adequate recorder.

The band spent four hours getting from Liverpool to Sheffield, most of that time spent in traffic jams and presumably controlling rage brought on from a stolen iMac and smashed window (events that happened during their stay in Liverpool). The clock passes half-seven and with a contrastingly uninspiring background I begin my interview (along with hanger-on Martin Simpson), parts of which where recorded for a video-documentary, with one of the most exciting and inspiring bands to visit this shores in a long time.

DiS: So, how is the tour going so far?
Idiot Pilot: Really well. The last time we toured there was like 40 to 50 people at each show and it's been double that this time, with some shows selling out.

DiS: And what are your plans after this tour finishes?
Idiot Pilot: We are going to be playing some shows closer to home (Bellington USA) and then hopefully releasing a new album or a single.

DiS: Would this single be from your debut, Strange We Should Meet Here?
Idiot Pilot: The plan is to release new material but things could change.

DiS: Have you already recorded any new demos?
Idiot Pilot: Yeh, a lot. Twenty seven or something like that. We will be playing three new live songs tonight.

DiS: And how do you write new tracks? Do you record on tour?
Idiot Pilot: We try to change the process as much as possible, but a lot of the times it starts off with a vocal melody. We don't like to do the same things twice though, it keeps things fresh. We have never recorded on tour, but we are in a van at the minute; maybe if we got a bus and the right equipment we could...

...The interview then veers into muso chat about Cubase and FruityLoops, in which DiS gets completely out of their depth. After drifting into random chat brought on by questions suggested by Alcxxk, we arrive back on topic...

DiS: So, influences: do you think they're apparent in your music or do you try and veer away from sounding like your favourite artists?
Idiot Pilot: I think we try and partake in everything we can. But the things we listen to most sound nothing like we music we make.

...DiS asks Idiot Pilot if they have heard of Low and five minutes are spent discussing their back catalogue. This somehow links to a story about R.Kelly appearing in front of a sign on stage saying '18 AND OVER ONLY', however due to recording problems and possible legal issues the story won't be typed. However, I will state that at one point Idiot Pilot comment that "R.Kelly is the black Morrissey".

Idiot Pilot: In terms of genres we definately dont focus on one single genre. We take influences from hip-hop as much as we do rock, although I dont think there are any new rock bands that excite us, at least in America.
DiS: I'd agree with that. I think at the minute there's probably only you guys and Anathallo who are breaking through from the USA that have really caught my attention.
Idiot Pilot: Mmm, I do think we are more interested in new hip-hop, artists like Kanye West and Atmosphere. And with the beats we find so much more in common with what we do than rock drumming.

DiS: And how do you come up with your beats? Do you get a beat in your head and program it or do you play it on an actual drum kit first?
Idiot Pilot: It sounds weird but with the program I use (FruityLoops) you can 'see' the beat, like how it will look on screen, and from looking at it on screen I can tell how something will sound. The drum beats are written at 460bpm, and the actual instrumentation is all included in the program itself.


And so, with battery power running low the interview is finished with handshakes and the consuming of more oranges. DiS emerges from the dank room and into the venue itself to catch the last few songs of The Seal Cub Clubbing Club's set. The band seem to have enough promise and knowledge of a good tune to step up from the support slot, even if it does seem they aren't running far behind the Arcade Fire bandwagon.

Idiot Pilot's headlining set lasts all of nine tracks, including the three newies and the encore. The first new track is their strongest to date and is likely to be the track their second album is based on, mixing the old trusty verse/CHORUS/verse/CHORUS structure and dancing guitar lines with some of the most brutal beats heard this side of Aphex Twin's 'Come To Daddy'. Singles 'To Buy A Gun' and 'A Day In The Life Of A Pool Shark' get the biggest response, whilst album favourite 'Violent Tango' keeps up the pace.

With a wealth of new material ready to be unleashed on audiences across the globe, it seems that Idiot Pilot are, as M-People once sang, moving on up.