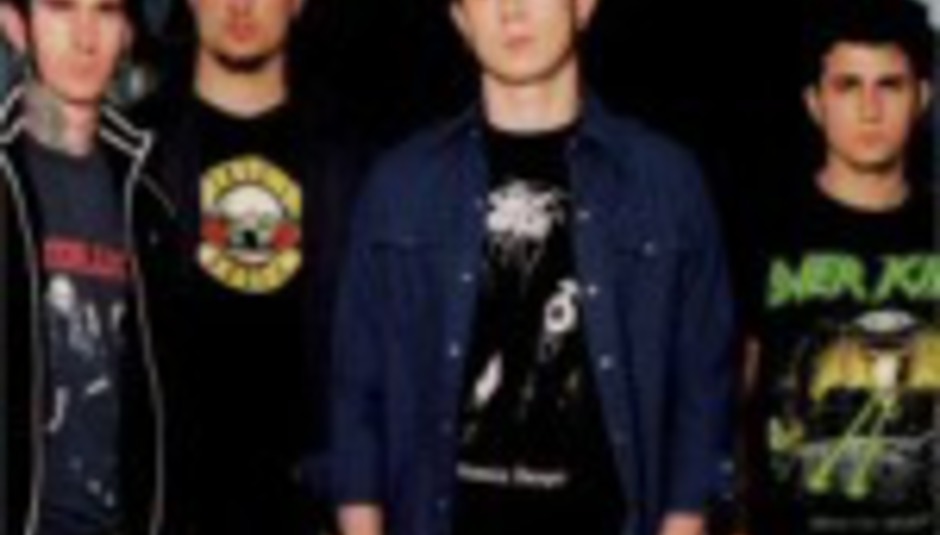 Trivium have passed over these shores twice already and are fast approaching with their third attempt to pose as the new harbingers of heavy metal. By splicing the explosive components of thrash, prog and death metal in a manner that impressed and enthralled in equal measure, the quartet were quickly heralded as the great white hopes of the international metal scene by several portions of the rock press. Trust me, there wonï¿½t ever be a ï¿½new Metallicaï¿½. Foolish as those hyperbolic claims might be, it is important not to dismiss the clear talent held by these Floridians. Trivium are worth their salt. DiS doesnï¿½t fly all the way to Florida to talk to youthfully exuberant bassist, Paolo Gregoletto. Heï¿½s only 20. Bless.

Not only is Paolo not yet of legal drinking age in America but Trivium only began to cut their major touring teeth in April 2004. This means that they have reached Astoria level in the UK in less than two years. Knowing this obviously causes the blood of many a hardworking British band to boil, and leapfrogging other American bands in the popularity stakes will tend to make one rather unpopular also. This is a fact that is well known to the band, as Paolo explains: ï¿½Some people donï¿½t think weï¿½ve paid our dues but weï¿½re working hard. Weï¿½re getting our asses kicked every night of this tour. Itï¿½s tiring but itï¿½s fun. We just happened to be doing the right thing at the right time.ï¿½

This is a true statement because Trivium have worked hard as a band. Having released their debut longplayer Ember To Inferno on German indie Lifeforce Records, they signed to the magnificent metal beast that is Roadrunner Records, and released their follow-up record Ascendancy in the summer of last year to universal acclaim. Paolo appreciates the way that they have come up, almost from the underground: ï¿½Weï¿½ve kept true to ourselves and we know what itï¿½s like to be nothing. It means a lot more that way because youï¿½ve actually worked really hard for it.ï¿½ Those album titles are notable, as they appear to chart the upward progression of the band. Paolo claims that the band already know what the next record will be called but sadly refuses to reveal the masterplan. Top secret and all that.

Ascendancy is truly a masterclass in modern metal, blending thrashed out riffs and deathly vocals with certain elements of prog rock. Former Prodigy guitarist Giz Butt guested on ï¿½gang vocalsï¿½ on one track, and the thing that truly stands out about the record is the sheer ability to sing along to it. While many have sneered at the more commercial aspect to the record, it is difficult to accurately bracket them as part of the New Wave or as part of the Metalcore scenes that are currently riding so strong on both sides of the Atlantic. This is definitely something the band feel strongly about: ï¿½Weï¿½re not part of that. Weï¿½re not part of any movements. Weï¿½re just a metal band. People can say whatever but I think that metal is a thing that never dies. Nu-metal died. Metalcore is going to die. Weï¿½re just going to prove it with our next record. Weï¿½re going to break away from everything like that.ï¿½

The ambition that surrounds this band is beyond commendable. Paolo did let on that their next album would contain a ï¿½twelve-minute instrumentalï¿½ and something that sounds like Motley Crue or Skid Row meets Maiden. The latter apparently contains three solos but is still under four minutes long. The more cynical among us may wonder if thatï¿½s not a song built for the radio? ï¿½We do want to take our music to different levels but also we like the catchiness: the anthems; the sing-alongs. Anything to bring the crowd into it, thatï¿½s what weï¿½re all about. Youï¿½ve just got to balance it.ï¿½

There is a certain steely determination in the bassist's highly polished responses that only ever comes when a group of people are all striving for the same goal. There can be no doubt that Trivium are not intending on being fly-by-nights. ï¿½If thereï¿½s one thing for sure, when it comes to playing live, we take it very, very seriously. Weï¿½re very confident in our live show. We want to be a band that is known for our live show like Maiden or Metallica. We want to be big. People give us shit for wanting that but those bands wanted the same when they were young. We donï¿½t want to be a band that gets a little bit of hype, sells a few cds and goes away. We want to be this generationï¿½s band. There will be bands like that and we want to be one of them.ï¿½ If thatï¿½s not a statement of intent, I donï¿½t know what is.

They may have written the album new by the end of January, but Trivium are going to be touring the Ascendancy album in March. Paolo explains: ï¿½Weï¿½re pretty much covering our short history as a band. There really isnï¿½t a song off Ascendancy that I donï¿½t want to play.ï¿½ So expect anything up to two hours of finely crafted metal in a rather large venue near you. Here are the dates! Sadly, it's mostly sold out but don't worry because theyï¿½re going to rock Download at Castle Donington later in the year. Joy.

Interestingly, the first ever Trivium tribute band, Ember & The Infernos are playing a couple shows at Brighton Concorde 2 on March 14 and then again at Islington Academy on March 22. Both are days when Trivium are not playing a show so it might be worth checking out...