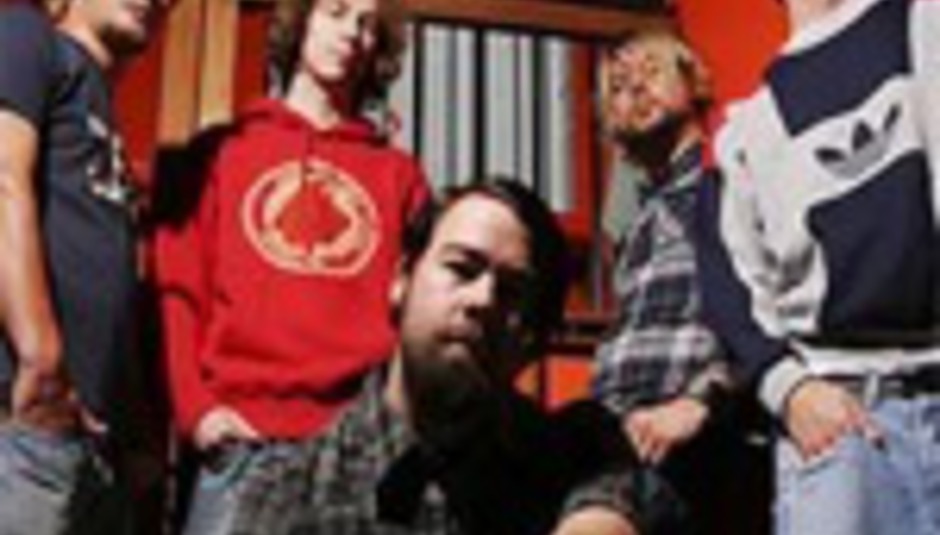 The Lucky Nine: "Calling us a supergroup is ridiculous"

The Lucky Nine: "Calling us a supergroup is ridiculous"

The Lucky Nine are supporting medusa-metallers This Is Menace and are similar in ethos as they too are a band that contains members with other musical interests. Similarly, however, they do not wish to be referred to as a ‘supergroup’ and this is by no means a ‘side project’. Oh no. DiS gets a brief chat with guitarist Daniel Carter where he explains his views on that matter quite exactly: “Calling us a supergroup is just ridiculous because it implies that we’re all rock stars or something, and side project implies that we’re all just doing it for a piss-take while you’ve got ten minutes off. It is neither.” So there. Do not insult this band.

Their live performance lies as testament to this as the man from Surrey who seems to have had his fingers in all the hottest pies, Colin Doran ,bounds across the stage in his characteristically graceless fashion, eschewing any accusations of this being just a side project for him. Refused are clearly a massive influence in this band as a whole and that comes through heavily in the style of Doran’s vocals here. As far removed from the smooth conveyance found in his other project – the highly lauded Hundred Reasons – the lanky frontman exudes an explosive energy that certainly carries through to the impressed crowd. This, however, is a crowd well versed in the metal fraternity and knew exactly what to expect. They're here for the carnival of This Is Menace and are very familiar with Doran’s input into that band also.

While the organisation of the dozen frontmen of the headliners results in but a few one-off shows here and there and rehearsals being very, very strictly limited, The Lucky Nine number fewer members and despite their other projects schedule themselves as accordingly as possible. “It’s not an issue. We just don’t organise stuff for the period of time when everyone else is away. When we played Download, I played the main stage with ‘A’ and then did the tent with Lucky Nine and that was kinda hectic but it wasn’t a chore at all.” Indeed, the proximity of Carter’s other band, ‘A’ helped make the task much easier. Having realised this, the bands performed on the same bill for three nights in Japan without any fuss. “The only time we had a slight issue was at Give It A Name because I was on tour in Germany and I just had to fly back that morning. That was hectic because you can’t do as much rehearsing as what you wanted to do.”

Timetabling is not the only thing that Dan Carter has been unaccustomed to. As the erstwhile bassist of ‘A’ (who are on the proverbial ‘hiatus’) Carter has had to readjust to being guitarist in The Lucky Nine and the transition was no more awkward than at that ill-fated Ally Pally show last May. “That Give It A Name thing was a nightmare because I’d been on tour for two weeks playing bass and then went and played guitar and I was just like [gurns and twists his fingers]. I had a hard time dealing with it. The weirdest thing is that our bass player, Jay [Rowe] is actually a guitar teacher. He’s a super technical guitarist and he’s been given the bass to deal with and I’ve been given the guitar! It was kinda confusing at first!”

There is no confusion onstage as Carter manages to play his crunching hardcore riffs without being impeded. While some of those riffs might hark back to the days of Quicksand and Refused there is little more than a nod to that era. In reality, the imagination invested here is insufficient to affect the masses beyond some spirited, rather than inspired, movement. It's the sheer power of delivery and visions of greatness here that wins the audience over. Richie Mills’ drumming has never been anything short of spectacular in his previous bands Cable and Sunna, and there is certainly no change in tactics in The Lucky Nine. His frenetic rhythms, backed up by Doran’s gritty growls, see a rather impressive circle pit emerge in the LA2 tonight. That doesn’t happen for support bands very often.

Touring lies in the heart and soul of every musician who enjoys playing live, and like any relationship where you’re consistently doing the same rounds with the same people in the same places with the same routine, stagnation is a clear and very obvious danger. Carter explains how playing in The Lucky Nine has refreshed his outlook: “We did the Bloodhound Gang tour recently and everyone thought that their crowd was gonna be drooling idiots but their crowd’s just the same as anyone who goes to any other rock gigs in town. The difference was nobody gave a fuck, or even knew that any of us were in other bands so it was like playing to a fresh crowd. It was just wicked.”

Another reason that Carter put the idea of this band forward was that he knew Doran and the rest of the band and knew that they could make some fantastic music but there was always something holding them all back. “You just feel that there’s some kind of constraint there if you’re in another band. Everyone just sticks to their own little thing and it’s just not the way it should be really.” Carter continues to explain, “You should be playing to as many people as you can with a different perspective on things.” If this is the result then I am surely inclined to agree wholeheartedly.