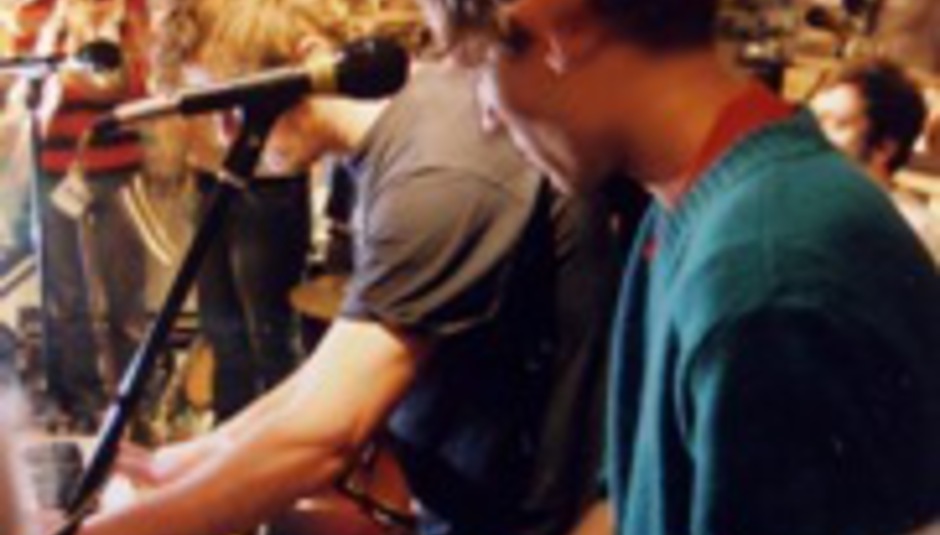 Thankfully we wandered past the store earlier, to see the tiny notice stating "Today – Friends of 12 Tonar – Trabant and Architecture in Helsinki." This is how Airwaves works. Ear need to be firmly kept to the ground, or else you miss the gems. Impromptu ho-downs and serenading electro attacks during your lunch are common place over the weekend.

In the tiny music shop in Reykjavik, the racks of cd's have been shifted out the way and an area cleared for an instore. The place is so full that half the crowd spills out the front to watch the unfolding spectacle through the huge glass fronted windows. The stench of mulled wine, sweat and men who've eaten too much pasta engulfs the area around the store. Inside, Trabant take to the 'stage' spot of a small area of floor at the front of the shop. A mishmash of electronic twangs, heavy metal and r n b, Trabant are a disco rock ensemble of noise. The Sigur Ros effigies emblazoned on the walls of the store – a familiar wall covering in Icelandic venues – couldn't seem any more out of place right now as the half naked front man presses his belly up to the glass, for the delectation of passers by. Mulled wine everywhere and the floor straining under the weight of the crowd, it's a relief when it's over.

Architecture in Helsinki (pictured above) have just arrived, following a hardcore tour seemingly all over the planet. They're in amazing spirits and looking forward to taking in the Icelandic surroundings, with trumpet, glockenspiel and triangle in hand. They take longer to set up than they play, but it's endearingly wonderful in a Belle and Sebastian kinda way. The confusion of percussion, brass and yelping all comes together in a gloriously layered soundscape of music lesson instrumentals. It's the pineapple and cheese on a stick effect, it shouldn't work but somehow it tastes so good. Hammering through a handful of songs from 'In Case We Die', everyone falls in love for a few minutes, and the smell of sweat and wine swiftly changes to a rosy sweetness.

A party atmosphere filled the room tonight, with it being the start of the weekend, which is notorious in Iceland for what we call 'revelry.' With most bars open until at least 7am in the morning, things become a little messy past the witching hour, so best to start early. Mid-act tune spinning had an indie-disco riot going, only to be sadly stunted by slightly downbeat-in-comparison electro supplied by Au Revoir Simone. With bitter-sweet delicate vocals and innocent melodies to boot, Simone are comparatively similar to the lighter moments of Broadcast, mixed with the pop beats of Modest Mouse. Unfortunately for them tonight however, 'Simone would have been perhaps more suited to a smaller venue and an earlier billing.

Metronomy follow with yet more synth-keyboard. Playing a solo show tonight, Brighton-based Joseph Mount is a refreshingly cheeky Englishman in amongst the softly spoken performances of the festival. Charming the audience with happy banter, and clearly having a great time, Mount breeds a fusion of electronic side stepping with a collection of computer generated, keyboard driven tunes. With the added bonus of live drum-machine bashing, Metronomy is a stripped down Jamie Lidell. Lacking in vocals, the impact of the show could have been more if there had been more of an oral energy to the performance. The anticipation surrounding the band playing inside Nasa tonight is highlighted by the numbers outside, the increased security and the presence of basically every band to have played the festival so far. We make it inside just in time to fight our way to the front and secure a spot for Brooklyn's own Clap Your Hands Say Yeah (pictured, left). The most talked about band of the weekend, the pressure is most definitely on to deliver after half the audience has been held outside for over an hour.

Front man Alec Ounsworth leads us through forty five minutes of slurred warblings which somehow have never made as much sense. Maybe it's the whiskey talking. The Talking Heads / David Byrne comparisons are easy to make, and I can't help thinking that tonight's performance wouldn't be out of place in an early 80's nightclub. No longer an A&R mans best kept secret, CYHSY have succeeded where many have fallen. With an album totally self produced and distributed, they've done it the hard way, but tonight show's how determined and confident they are. With bass lines bespoke for a front row dance, the room succumbs to the infectious delivery of good times.

Leaving Nasa, DiS heads for Þjóðleikhúskjallarinn to see Ampop. Perhaps it was due to the unwanted comedown following the CYH hit, but Ampop fail to make an impact. Again, I feel a little disappointed by the choice of billing at the festival. A better choice in terms of stage times could have made all the difference to many acts during the festival, especially Ampop who are far better received in the UK than in on their home turf in Iceland. Musically on record, Ampop deliver delicate and heart warming songs, however tonight it all seems a little forced.

Thankfully back into town, the venue of Gaukurinn brings back the disco and dance to a Saturday night with 'The (International) Noise Conspiracy'. Like The Hives nasty little brothers, dressed in matching outfits and perfectly emo coiffure's, this is more of a stage show than a gig. Featuring members of now deceased punk outfit 'Refused', TINC still hold the catchy riffs of their predecessors and singer Dennis Lyxzén works the crowd and his band in equal parts. Granted, they're not winning any wars with pop culture politics in their lyrics, but you get the impression they know not to take themselves too seriously. The crowd love it and by the encore – which sees Dennis hanging from the rafters, whilst still delivering impeccably to-the-note vocals – the whole room has bought into the conspiracy. It's the end of the night, and the festival. DiS has been educated in the ways of Iceland. We'll be back, as will others. Airwaves will undoubtedly grow into the international festival and event of the musical year. Offering an open-minded mix of musical genres and opinions, set against the backdrop of an incredibly beautiful country, it's difficult to drag yourself away.