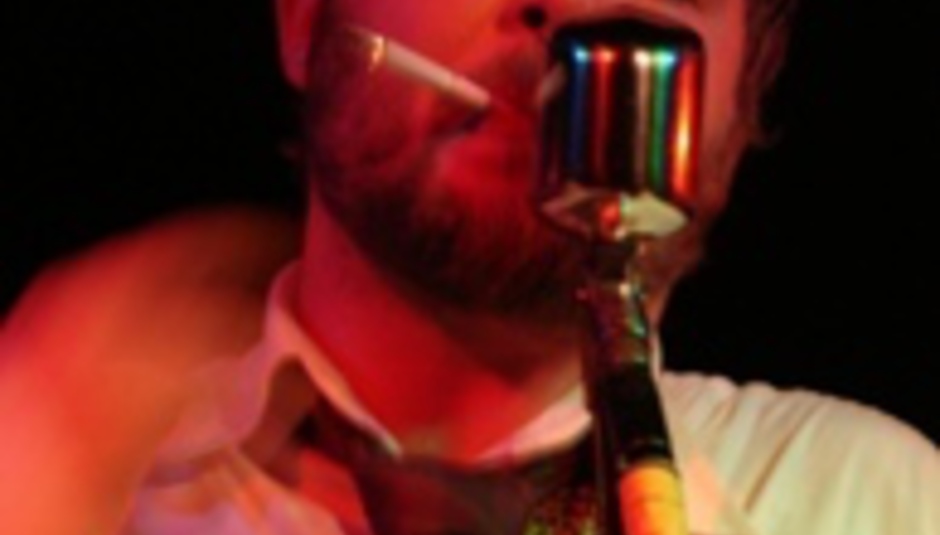 ...and so we shuffle along in the painful cold to host the opening night of the festival, expecting a collection of delicate Icelandic singsong bands. Grand Rokk is the venue for the evening, Iceland's answer to the Dublin Castle in terms of lack of ventilation and space. Old men cower by the one armed bandits in the downstairs, whilst the kids upstairs thaw out with a few swift whiskeys. Climbing the stairs, we're greeted by a dose of Irish Pogue skiffle delivered by 'The Foghorns', who with more pots, pans and buckets they could make the Mystery Jets jealous. Following them are Vax (pictured above), a band who's front man has vocal chords that have been dragged down a cheese-grater. With this distinctly Irish start to the night, it feels a million miles away from the preconceptions of Icelandic culture. The queue goes round the block, and it quickly becomes apparent that it will definitely not be a quiet Wednesday night.

Buzz band of the night, 'Benni Hemm Hemm' make their way from the back of the pub through the sweating circus of Icelandic fashionables and take over the whole stage. With a full brass section in tow, there are fears of an all-out ska fest, soon to be quashed by a foot tapping collection of pop quirk. Fluxing between big band folk and blues explosions, Benni Hemm Hemm's build ups and thumping drumming, quashed together with some surf guitar, are let down only by a slightly weak vocal performance from their front man. Song's such as the tongue in cheek "I can love you in a wheelchair, Baby" are taken with gusto by the crowd tonight, obviously overwhelmed by the musical big band fun crammed into this tiny venue.

Following the Hemm's are the Icelandic Battle of the Bands winners 'Jakobínarína.' If I'm honest, I'm not expecting much. All in their teens with but a third of the musical experience as the rest of the bands on tonight's bill, the thoughts of school talent show renditions of 'Wonderwall' are all that spring to mind. How wrong you can be. The youth of today must actually learn something in their music lessons… with the confidence of the oldest guys in rock; these six lads storm the stage and make the night their own. With the brash confidence of The Libertines when they still cared about their music, mixed in with the moves of Maximo Park, they cover every spare inch of the stage with intoxicatingly tight riffs. Front man Gunnar Ragnarsson is a young Ian Curtis, with the boyish face of a once innocent Prince Harry. And with lyrics like "nice guys don't play good music", there could be an off putting Doherty-esque demeanour to him, but all is forgiven with the sweetest broken-English 'thank you's' to the audience.

Wandering downtown Reykjavik on Thursday afternoon, hungover and still reveling from the DiS success of the night previous, we go in search of the 'Lobster of Fame' gallery, which we are told is "underneath the yellow supermarket." Said 'yellow supermarket' happens to be an Aldi-esque wonder of sausage and overpriced breakfast cereal, which in the basement of which you can find a small music shop-come-gallery. Owned by ex-Sugacubes members, the small room not only offers off-venue afternoons of instore music throughout the festival, but also shrine's to Iceland's best musical exports – Sigur Ros and Bjork.

Thursday evening starts in the Reykjavik Art Museum – a towering white expanse, dwarfing the other venues in term of size and sound system. 'Appararet Organ Quartet' confusingly consists of five people, the extra non-organ playing member being a drummer. This nonsensical start to the evening's entertainment continued when the business-suite clad middle aged techno-freaks beeped their way through some bewildering electro. DiS then moves onto the Nasa venue, where a huge projector screen adorns the back of the stage. The slight figure of Daniel Agust is shadowed by the powerful imagery behind him. Prancing around the stage in Adam Ant attire, Agust is musically a more superior Patrick Wolf, combining both his and a twinge of Devendra Banhart vocals to the soundtrack of 21st century Edwardian waltz. This one man panto is made even more exciting by the fact that DiS realizes they are stood next to Iceland's first lady, Miss Björk Guðmundsdóttir.

Moving onto the longest named venue of the night, Þjóðleikhúskjallarinn, and fighting our way to the front we make it just in time for José González (pictured, left). The place is rammed, layers of people sprawling on top of each other to catch a glimpse of the man behind the guitar. With the most delicately honest vocals, held together by classically beautiful Spanish guitar, José holds the audience on his every word. Ending the set with covers of Massive Attack's 'Teardrop' and Joy Divisions 'Love will tear us apart', González succeeds in making them his own and also bringing tears to the eyes.