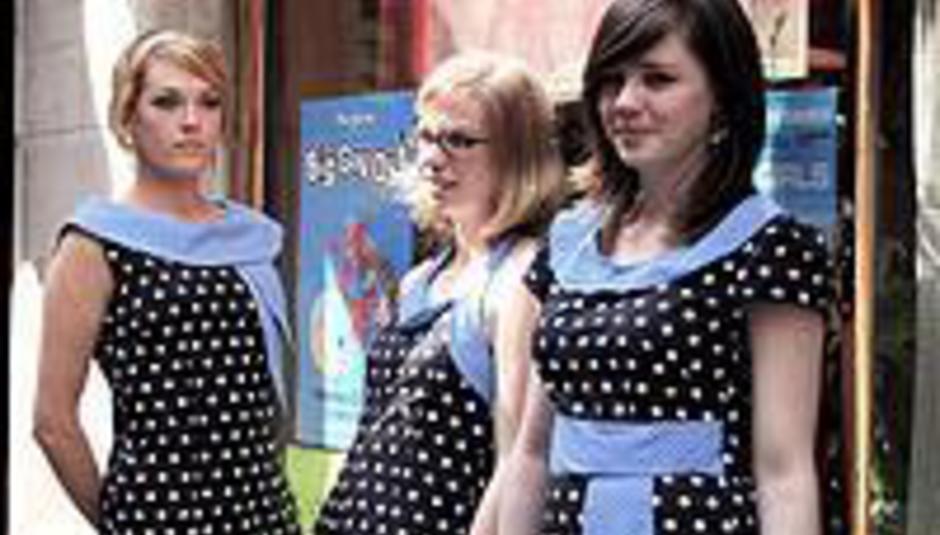 Chaser shots and polka dots: on the p*ss with The Pipettes

Chaser shots and polka dots: on the p*ss with The Pipettes

By the time DiS staggers through the door and into our interviewees' eyes, the lines that distinguish their frames from the background of this unremarkable Highbury boozer have blurred somewhat worryingly. We can't be held absolutely, exclusively responsible for our state of mild inebriation: an afternoon spent necking premium lager alongside accommodating cohorts and newly, and briefly, acquired drinking companions has ensured that our meeting with The Pipettes is both delayed and characterised by the smell of our own breath. Newcomers to our company would assume we'd spent many of the preceding hours on a drink-all-you-like brewery tour.

The three girls that comprise The Pipettes - Gwenno, Rose and Becki - sit around a table, a chair reserved for DiS's drunken ass the only intruder within their intimate circle. Their backing band, The Cassettes (Bobby, guitar; Seb, keyboards; Joe, drums; and Jon, bass), are nowhere to be seen, although tracing pub snack projectiles back to the balcony area above us may lead to their location. DiS has another beer - this time a sensible, low-alcohol choice - but our slightly disheveled appearance and slurred introductions give our preceding activities away immediately. We try to cover our all-too-obvious tracks with humour, after a fashion; some failures later, we adopt a serious voice and resort to reading what's scrawled before us.

So, I've written my questions on the back of your press release for 'Dirty Mind'...
Becki: Oh, I wanna read that!

It's got a nice typeface on it, kinda glam. Anyway, the single: 'Dirty Mind' is the first release that isn't of the limited-edition variety, right?
All three: Yes.

So is this the beginning of serious business? Is this when you step things up a level?
Rose: Hopefully. We've never been, "Oh, well, whatever", it's just that we've never had any money to do something like this before. This is the first time we've felt a little bit grown up.

So what feels different this time, particularly, when compared to the release before it? ('ABC' was a limited 7", through Transgressive. It's long sold out.)
Becki: We've had to do a video this time. It's a bigger deal.

And is it exciting?
All three: Yeah!
Becki: It's very exciting.

So, does such a step up mean that you've got to prove yourself in any way? Do you have to prove the doubters wrong?
Rose: I suppose, but we've never really thought about it like that, I don't think.
Becki: It's not so different from our previous releases, really, as it's not about how many people buy the single, y'know, it's more about us doing it for ourselves. We desperately want to release material, and we want to maintain a steady series of releases too. I mean, there won't be an album out until next year, so there won't be another single until next year, but this release kind of had to happen now. In all fairness, I don't think this has sunk in yet: people will be able to go out and get this single, all over the country. That's the best thing about it, as people were frustrated that they couldn't get the last single. So it's nice to think that those that missed out can go and get this one.
Rose: It'll be a nice way of gauging where we're at, too, in a business way.

And I suppose that a proper tour will support the album's release, as and when it's ready?
Becki: That's more exciting than how many copies of a song we can sell, which is why we can't really gauge how the single will sell, because we've not had the chance to play live everywhere.

But one-off shows here and there (tonight the band plays at the Buffalo Bar) must serve as a toe in the water? And you've played overseas, too...
Rose: Yeah.
Gwenno: I don't think it's testing it out, necessarily.
Rose: I suppose... we've played enough to know that there are people that'll come see us regularly.
Gwenno: We went to Sweden, and there were loads of people there to see us. We went down better there than we have done here!
Rose: Sweden was absolutely amazing.
Becki: We're playing Barcelona in February, and these are shows that we're being specifically asked to play at. We don't have any merch' or anything to sell out there, though, so it's tough to make any money behind you. So we're going out there to play based only on the fact that the promoter likes the songs, so we're excited about that aspect.

I guess you've got songs on-line, then?
Rose: Without the internet, none of that would have happened. We could never have played abroad, or even at some places in this country, without a loyal fanbase that's grown through our forum, and stuff like that. There are people already out there, even in places where we haven't been gigging.
Gwenno: I don't think it's very calculated, where we've been or what we've done.
Becki: If somebody asks us to do something, we pretty much will, because we just love what we're doing. The way things may change next year, is that we will be doing this more than anything else, y'know... I dunno, everything's happened naturally so far.
Rose: At the moment, we've not had the chance to become disillusioned. We've not taken it seriously enough for something to go wrong. This is the honeymoon period, as it were. It could all go down!

How has the switch to a label with the finances to do an unlimited release, in theory anyway, and an album affected you?
Becki: Well, we'd been playing for a good year and a half, so I didn't think we'd ever expected to get signed. We're so different from what's 'normal' in the music industry at the moment, so we always thought it'd be difficult for a record company to do something with us. A lot of labels were saying, "We really like the idea, but we don't really know what to do", but Memphis (Industries) said they could.
Rose: They said they loved it, too, and that they wanted to push it.
Becki: And we weren't waiting for that, so we were like, "Oh wow". They said they didn't care about money or anything, but they wanted us because they thought we were great.

Like you've said, though, you don't really fit into to any contemporary scene. You're unlikely to find yourselves on the cover of one of the glossies, or something...
Rose: Exactly, so it was a lovely surprise (to be signed). Even when we were rehearsing for our first gig, none of us really knew how it was going to go. So to be taken seriously sort of validated us... I dunno...
Becki: After the first gig, people said afterwards that they'd had no idea what we'd be like. They said they thought it'd be terrible! I think that's why, even today, we're totally like Marmite: you either love us or hate us.
Rose: Although any reaction is better than nothing at all. There's nothing worse than being really medium, and being swept under the carpet. To encourage a real, proper, violent reaction - that's the whole point of any art form.
Becki: If the viewer thinks nothing about what they're seeing or hearing, then you've not achieved anything. If you can feel their actual reaction - their excitement or their emotional response, then you've fucking done it! That's the point of the whole thing.

Becki, the most animated of the three, smiles conclusively. She's right, too: with so much mediocrity washing over our airwaves, there's forever space for those that court bipolar opinions with such enthusiasm. The Pipettes' beyond-retro sound - so ye olde in its pre-rock 'n' roll nature that a Marmite-like split in taste can't be avoided - will have certain tastemakers rushing to their poison pens with all the haste of Christmas Eve shoppers, but there's a charm to their music that cannot be denied. There's a grace to their guile, and their focused approach is entirely commendable; lesser-minded but more-rocking outfits would have buckled at label's requests to alter their styles ever so slightly, and subsequently would have bitten the creative bullet to jump onto a record label's roster far sooner than The Pipettes have. By sticking to their (bubble)guns, these girls (and boys, let us not forget) at least have the integrity angle of their appeal sewn up as neatly as their trademark polka dot outfits; commercial success, though, is an entirely different matter, and one that'll only make itself known clearly some months from now. DiS's hazy view: we like yeast extract on our toast. After all, it's a byproduct of the brewing process...

'Dirty Mind' is out now on CD and 7" through Memphis Industries. The Pipettes' website can be found here. DiS's hangover was significant.