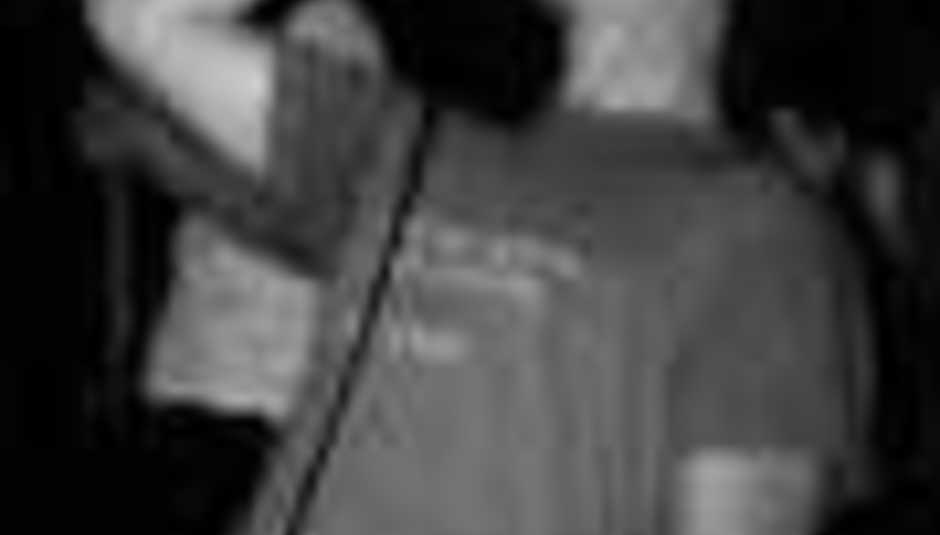 James: “Who are you and what do you sound like?”

Isaac: “We’re a band and we sound like ZZ Top!”

Alistair: “Yeah, when we were in school.”

I: “Not that we go to school because we’re old enough to drink beer!”

I: “Alistair’s put his foot in it! I was there because I was teaching!” <

Kieran: “We were all teaching in school and they came on the radio!”

“What do you think about bands like Less than Jake, Blink 182 and Green Day who let their songs be played on the radio?”

I: “Green Day are a bit poo now! I heard their new song on Radio 1 as well, while I was…err…somewhere, and it sounds a bit like ABBA or something!”

A: “Yeah, but there’s only so many four chord songs you can write though aren’t there.”

“Do you think they’re selling out?”

A: “They’re all pop bands now, that’s how they get their money.”

I: “I don’t mind bands being played on MTV or being in the mainstream if people want them there. I mean like, Napalm Death, people have got to know them and they might ask for them but with Blink 182, people have heard them two minutes ago and want them on MTV. That’s what I don’t get…”

“If there was one band in the world you could tour with who would it be?”

I: “No man, what the hell are talking about?!? Louis Armstrong. He rocks…in a kindda soul sort of way!”

I: “Pretty much everything except dance music, indie music, Christmas trees and kevs! Kevs have fuelled us to be against them! If you don’t know what a kev is just look at anyone in Birmingham.”

“What plans do you have for the future?”

“What do you think of Cod Locker?”

I: “Their bass player’s a bit weird though!”

I: “The drummer smells!”

“What do you think of the ska scene in Birmingham?”

I: “We’re one of the four ska bands in Birmingham.”

A: “We’re not really a ska band though are we?”

“Have you got any plans to bring out a CD?”

I: “Hopefully we’ll record something if we can afford it, none of us have jobs and we’re all poor! We’re want to make a rip off of Marilyn Manson’s Antichrist Superstar and we’re gonna call it Anti-kev Super-SKA! And it’ll have four songs on it about kevs.”

“What’s been the best gig you’ve ever played.”

I: “Tonight’s because it was our fist gig in Birmingham. We also got through to the quarter-finals of a national battle of the bands once.”

A random person: “Hi, I’m going to join the interview!”

I: “Yeah so we got through to the quarter-finals but they kicked us out because we’re not an indie band and we don’t have a transvestite!” <

I: “James, what’s your favourite kind of cheese?”

J: “I don’t like cheese…hey, what are you doing man, I’m asking the questions here! What’s your favourite type of cheese?”

“Are there any bands that you’ve got into fights with?”

A: “I’d like to fight Paul Wincup (Gig promoter and all round nice guy)…”

“So what’s wrong with Paul Wincup? He puts on some good gigs…”

I: “It’s just that we sucked really badly when we played in Rugeley. I planted a tree this morning because of how much we sucked! <

S: “But luckily we made friends with Slow Gherkin which was good. We’re never going to play at the Red Rose again!”

“So where do you see yourselves in a year’s time?”

K: “Sitting at this table talking to someone we don’t know!”

“What about in five years?”

I: “I’ll be helping people out in an old persons home! I need money.”

“Can you describe the Chumpstate live experience?”

S: “If it’s not in Birmingham it sucks!”

I: “If you’re serious then don’t bother.”

“What are your views on Slipknot?”

I: “They suck man! They’re all arrogant bastards and if they came anywhere near me I’d hurt them! I did like them but now everyone that’s thirteen automatically likes Slipknot!” <

A: “We’d ask for a fan’s autograph rather than them asking for ours!”

I: “If you want to get onstage for one of our gigs then feel free because we’re less important than you are!”

“What’s your favourite type of monkey?”

“What do you think about metal in general?”

I: “Yeah, you can make beer cans out of it! It was cool but now the novelty’s worn off. When I was little I used to think ‘how can an airplane, which is a big piece of metal fly in the air?’ but it just does!”

K: “It’s because of other metal bits moving around isn’t it, so yeah, metal is cool!”

“Err, I’m out of questions…do you believe in God?”

I: “No way, don’t get me started, you’ll run out of tape! Apparently, don’t carry a skateboard and think you’re on top of the world because that’s what this preacher said to us. Then one day I saw him in McDonalds, which endorses the IRA, which kills people so he’s evil. Actually, don’t print that, I don’t want to get beaten up by the IRA!”

A: “Why did the one armed man fall out of the tree? Because someone waved at him!”

I: “Why did the fridge fall out of the tree? Because of gravity! Gravity sucks!” <

I: “You ask him nicely! I’m sure he’d like to get on a bus, he’s probably never been on one before!”

“Ok, I think we should stop this now…”

I: “NO! You can’t go, I’ve just thought of something else really important to say……”

K: “He’s just trying to think of something now!”

J: “The horoscopes are pretty good as well.”

I: “Yeah, they’re wicked but they don’t make any sense, it’s all the same old bollocks! Did you ask us about death?”

Random person: “But that guy on the evening session said it was Blink One Eight Two…”

S: “Yeah, there’s people that think, ‘Oh, I have a crap job now but that’s ok because I’ll have a better one in my next life!”

I: “Why don’t they just kill themselves?”

J: “But what about those people that go on Jerry Springer and can remember their past lives?”