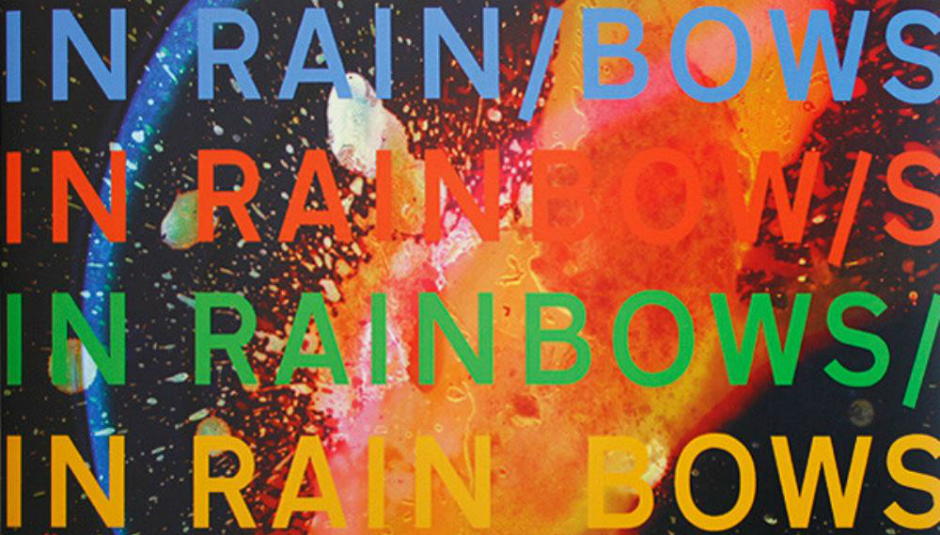 The Fangasm: In Rainbows by Radiohead

The Fangasm: In Rainbows by Radiohead

This week marks the tenth anniversary of In Rainbows. I wasn’t old enough to remember it first time around. Ten years later, and my fondness to Radiohead is not formed from the hysteria that surrounded its release. I just have the music. But there is no doubt that In Rainbows is a five-star album.

There are lots of records made up of ten or twelve fantastic tracks. But few are as perfectly cohesive as Radiohead’s seventh offering. Fewer still hold you with sustained awe at the constant rise and fall of its unnerving sonic beauty for a full 43 minutes.

There are numerous things that make this a remarkable record. Of course, it’s a Radiohead album, the band whose revolutionary development from rock extraordinaries to alt-rock electronic pioneers is incomparable.

The method of the 2007 release, too, was revolutionary. The first pay-what-you-like album release from a major band made critics and fans alike sure (if concerned) that the landscape of music would change forever. Those who could afford to pay paid, and those who didn’t could still download In Rainbows just the same. When the album was finally physically released two months later, it debuted at #1 in the UK charts and the US Billboard Top 20. It would be heralded by all who listened, receiving a 9.3 rating from Pitchfork, and placed at 336 in Rolling Stone’s 500 Greatest Albums of All Time.

Contrary to my insistence now, that this is an album to listen to from start to finish – preferably in one breath – the first I heard from it was just a handful of tracks. I wasn’t there to plug my headphones into my computer on 10 October 2007 – I was only ten, and wouldn’t hear those first clatters of ‘15 Step’ for another few years. Maybe that makes it even more remarkable that I remember my first listen so distinctly: my introduction to Radiohead, without knowing their back-catalogue, understanding their significance, or following the media hype of this release, came in the form of three Youtube links, sent to me by a friend late one night. They were, in order, ‘All I Need’, ‘Faust Arp’, and ‘Reckoner’.

To this day I will never know why my friend didn’t suggest I listen to the album in full – it’s not long, and I don’t know how I could choose just a few tracks to suggest today – but these were wise enough picks to get my head spinning enough to go on to play the whole thing.

There are jarring rhythms, uncomfortable chords, and Thom Yorke’s unfettered (and at points irksome) falsetto, but on the whole, the genius of the album comes down to its uncomplicated beauty. In Rainbows – like the rattling of much of The King Of Limbs or Hail To The Thief before it – seems to find rhythms in the strangest of places. The band’s keen ear for sheer tunefulness (which isn’t necessarily the most obvious feature of a Radiohead album) starts with the percussive groove of opener ‘15 Step’, a song whose smattering of rhythms in combat is somehow joyfully danceable. Even in the sensuous stride of ‘Weird Fishes / Arpeggi’ and Yorke’s “Why should I stay here? / Why should I stay? / I’d be crazy not to follow / Follow where you lead” there is a jolted beat, as syncopation starts to sound neat.

Amongst the beauty lies terror. ‘Nude’s seduction squirms with eeriness. This is a song where the line “You’ll go to hell / For what your dirty mind is thinking” stops play altogether, albeit for just a few seconds.

‘All I Need’ stands as the most heart-breaking Radiohead track – even taking into account last year’s A Moon Shaped Pool, with tracks such as ‘Daydreaming’ and ‘Present Tense’ haunted by the break-up of Yorke’s 23-year marriage to Rachel Owen. As Yorke’s sobering melody troubles the upper line, a gnarly bass wanders underneath, in classic Radiohead uneasiness. And then there’s the growing piano, made all the more effervescent by feathery strings, and just a lick of a harmonic change. For once you can make out the words of Yorke’s warblings; some of his very best lyrics feature on this album.

For all the contained beauty on this record, Radiohead know when to falter. One of the most spine-tingling moments on In Rainbows is a whimper – Yorke’s little cry in ‘Reckoner’, as he waits for the drums to recommence their swaying rhythm. Every time I sit around holding my breath, and, as the rhythm kicks back in, can finally release my sigh.

‘Videotape’ is what is left ringing in my ears long after I take off my headphones. Its earth wire is the revolving piano-coda, as Yorke’s vocals are masterfully draped over the top, disappearing and then reappearing as though orbiting us as he sings about “Today … the most perfect day I’ve ever seen”. Even as he whispers about “the pearly gates” there is a slinkiness to the sound.

Many will argue that OK Computer is the sound of a rock band at the very top of their game, and that shaking things up on Kid A in 2000 is what Radiohead will be most remembered for. But it is In Rainbows, with its unfaltering emotional intensity and purity of melody, that’s the stand-out album from a band where nearly every release has the potential to be their best. This is when they achieved perfection.