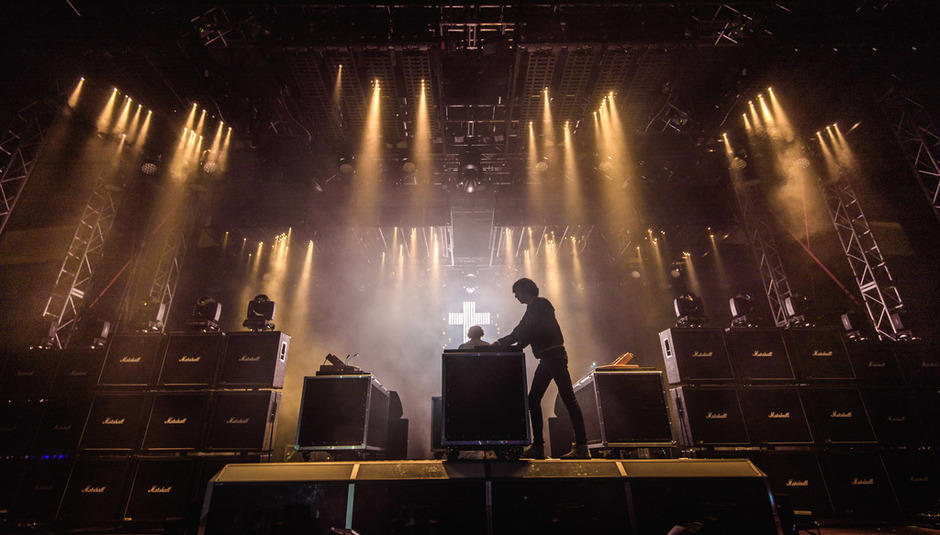 With exceptionally hot weather gripping Barcelona, this year’s Sónar looks set to be truly sweltering when I arrive for Thursday’s day programme.

Thankfully, the various indoor stages at the Fira de Montjuic venue provide plenty of excuses to stay inside and dodge the sunburn – starting with Glasgow’s very own Denis Sulta, who offers a set top-loaded with crowd-pleasing house and feelgood disco vibes sets the tone, complete with a surprise entry from Basement Jaxx.

This year's lineup spans a typically diverse range of genres, but the onus seems very much on light, summery house and electronica blended with a smattering of more cerebral acts. The former is nailed by Craig Richard’s pumping closer for the day programme. A longtime staple at London’s Fabric, the Hawaiian shirt-clad Richards looks like he got lost on his way to a Fatboy Slim gig, and his set is similarly accessible, if a little predictable.

Friday gives us the first taste of the two-venue programme, with all the pros and cons attached. Sónar Day unfolds in a relatively small space near the city centre. It lacks a coherent atmosphere compared with the gargantuan, industrial feel of Sónar Night’s venue, but in a way that’s appropriate for the eclectic cocktail of musical styles and punters the festival attracts. The central point is outdoor stage SónarVillage, where brass-bashing Kiwi magpies Fat Freddy’s Drop treat us to one of the festival’s few proper live band performances, complete with plenty of laid back dub echo, horns galore and a man who looks like an extra in the world’s worst home fitness video.

Then comes a highlight – Clark’s dense rhythmic experimentation and lush melodies weave sonic tapestries of a truly mesmeric quality. This is electronic music for thinkers, channelling Oneohtrix Point Never and a touch of Radiohead. On tracks like 'Nordic Wit' and 'Peak Magnetic' the producer/DJ builds to euphoric heights, and has the crowd in the palm of his hand. Visually it’s equally spellbinding, as pulsing geometric strobes backlight two dancers in motion. They give physical expression to the sound, by turns writhing amidst billowing material and robotically semaphoring. Towards the end of the set Clark’s artiness loses the crowd, but this is still a million miles more interesting than the standard DJ-plays-beats format, and something to write home about.

Speaking of DJ-plays-beats, Damian Lazarus finishes up the day’s proceedings with Latin-infused rhythms to get hips rolling. It’s the last thing DiS catches before the queue for the Sonar Night bus. For a first-timer at Sonar, the two venue angle seems wholly frustrating and pig-headed when you’re stuck in Friday night traffic meandering to the evening destination at Gran Via L’Hospitalet, a little further out from the centre. The feeling returns upon leaving in the small hours, when the hometime scene outside the venue resembles a zombie apocalypse film, tired clubbers hurling themselves at any available taxis. In short, the two venue transition is a buzzkill.

But stepping inside the cavernous conference centre to the strains of DJ Shadow makes it abundantly clear why the organisers want the nighttime programme here. The SónarClub stage gives artists an enormous canvas for their show, complete with the capacity to handle all manner of visual tricks and - crucially – great sound. Shadow takes full advantage of this, his set spanning old and new material and choc-a-bloc with craftsmanship behind the decks. As you’d hope, it’s an effortlessly cool, breakbeat-heavy performance that plays with our expectations and is tailored for laid-back grooving. Closers 'Building Steam With A Grain Of Salt' and 'Organ Donor' provoke a rapturous response.

Jon Hopkins keeps things more straightforward, but to immensely satisfying effect. Flanked by kaleidoscopic colour, he bobs over his tech while hammering the crowd with a relentless, pounding onslaught of beats. Live, Hopkins’ sound enjoys a far more visceral dimension than on record, full of near-manic urgency.

Which is far more than can be said for Moderat. I only catch the start of their set before heading elsewhere, but the electro supergroup seem leaden and middle-of-the-road after Hopkins, their pace slow and performance somehow veering towards boyband territory.

Perhaps things would have picked up if we’d stuck around, and indeed with Nicolas Jaar running late on the SónarPub stage we could have done. But it’s worth the wait. Jaar has always been something of a sonic alchemist, flinging elements as varied as blues spirituals and ambient into his electronic stew. Tonight is no different, as he plays a new live show that’s by turns challenging and immensely satisfying. A snail-crawl slow opening lets the crowd know what to expect, and indeed a large portion of the set feels like one big tease, with Jaar hunched Wizard of Oz-like behind screens of light, never communicating. But when he finally picks up the pace, it’s tremendous; the likes of 'John the Revelator' and 'Mi Mujer' emerge from the swamp to get the whole place moving. While not quite as instantly entertaining as some of his other Sonar sets, Jaar proves that good things are worth waiting for.

The epic scale of Sonar’s programme may be a dream for the artists, but can take its toll on the festivalgoer, as I discover upon waking up late on Saturday. We arrive at Sónar Night to some familiar strains; the glorious, hedonistic sounds of disco legend Cerrone are reverberating through the conference centre. Unfortunately, we’re backstage rather than in front of it, so only catch the closer 'Supernature'. But, needless to say, it sounds immense.

A brief stop-in to catch the start of wunderkind Seth Troxler and Tiga’s six-hour marathon set then turns into a longer stay. Playing in SónarCar, a red-curtained mini club and sweatbox, the duo are on staggering form as they drop beat after beat. The vibe is ecstatic, relentlessly hard and pure, embracing everything from classic house to trance. Everyone is dancing, and by the time I finally, reluctantly, prise myself free there are queues of people waiting to get in despite the furnace-level temperatures. Amazing stuff.

Back on the central SónarClub stage, Clara 3000’s dark, leaden beats provide a captivating, altogether moodier counterpoint. Then it’s time for one of the night’s big names – the return of French electro-nostalgists Justice (pictured). Sónar is a great fit for them, and as anticipated, their set is a huge crowd-pleaser, top-loaded with big hits like 'D.A.N.C.E', 'Civilisation' and 'Genesis'. There’s something pedestrian and yet immensely cool about the way the duo holds the stage, calmly switching back-to-back and face-to-face on their monitors like clerks in some kind of futuristic accountancy office. Their pounding, retro-synth sound is perfectly complemented by a frenetic, monochrome light show that’s almost as widescreen as their music.

De La Soul wrap up the 2017 weekend in buoyant style. The resurgent hip hop legends are the most communicative act by a country mile, eschewing decks-bound reserve for good old-fashioned stage banter. They rattle through a string of hits, seasoned with crowd call-and-response, affable chit chat and old-school swagger aplenty. The crowd is relatively small and scattered, but when they tell us to get our hands up, no-one hesitates. Feelgood classic 'Me, Myself and I' provides a perfect summer finale.