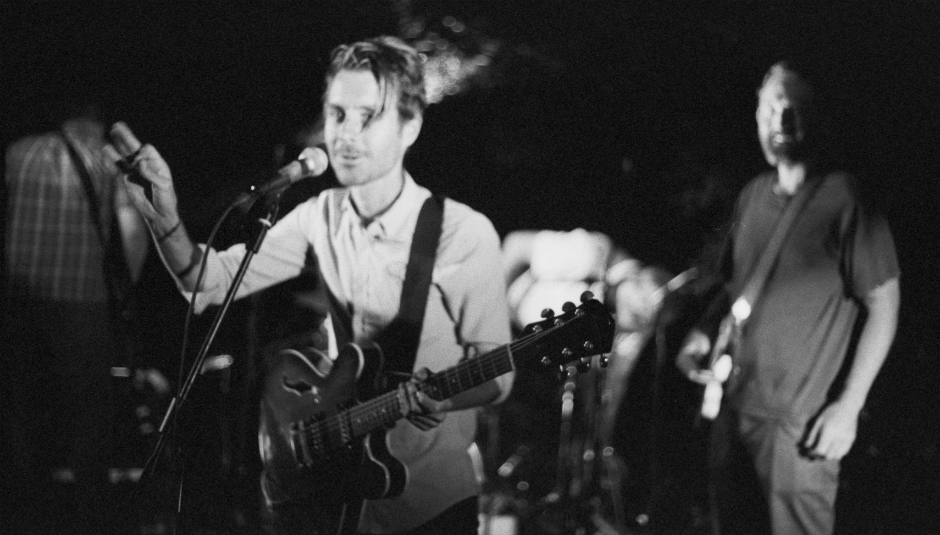 "We thought we had a chance to change the state of music": DiS Meets The Van Pelt

"We thought we had a chance to change the state of music": DiS Meets The Van Pelt

There are bands that may be too important to become mainstream. They may seem to change the game with big record deals, but their influence doesn’t come from commercial success, it comes from the making that move, taking a different direction and unveiling something new about music. The bands who take this energy and move it toward the masses with a more palatable, diluted version, they’re the ones who get commercial success. That’s not what this interview is about.

And yet, a pursuit needs a goal – something to aspire to. Such is the case with The Van Pelt. Formed in 1993 in New York, the four piece burned brightly with a few lineups for four years, putting out Stealing From Our Favorite Thieves and the era-defining Sultans Of Sentiment in 1997. The Van Pelt made it cool to talk over buzz-saw guitars and chiming indie lullabies, and made the hushed voice and gentle word as melodic as 100 harmonies. To this day no one has really touched The Van Pelt.

The band reformed for a European tour in 2014, and recorded the first performance, an intimate concert in a friend’s back garden in Italy. The definitive warm-up show. Speaking to front man Chris Leo (brother of punk-politic supremo Ted Leo) about its release on Gringo Records & Flying Kids Records and the passing from ‘then’ to ‘now’, it quickly becomes clear that, now more than ever, the band is in the right place to be making music for themselves so that others can marvel.

DiS: You’ve described in press materials about the joy you’ve felt in playing with your friends, and how these ‘moments’ were now taking you away from the anxieties you had as a performer some 20 years earlier. Why do you think that you’re able to take this perspective on performing live now? Did you put lots of pressure on yourselves back then?

Chris Leo: Yes, we did. It might be hard to believe, but we thought we had a chance to change the state of music. It must be hard for Millennials to imagine, but when Nirvana and Sonic Youth signed huge record deals it felt like a massive hole had just been blown in the system. Major record labels were begging The Van Pelt to sign deals with them, and it gave us the impression that if we kept pushing the envelope one day even our non-chorus non-sung songs could be enjoyed by the masses. So not only did we put pressure on ourselves to play well, but we put pressure on ourselves to be spearheads for a movement that could possibly take down corporate music and replace it with anything-goes freedom. Of course, we were in our early 20s and filled with ambition and naiveté.

Now, 20 years later, we are playing as spectators of our own selves. I’m so glad I didn’t know how futile our quest was when we began back then because if I did I would have just been a DJ and surrendered to the sometimes beautiful vacuousness of Ibiza. Now I think I’m able to enjoy the Ibizas of the world better knowing I was a banner man for something idealistically larger for decades. I’m a little out of the loop musically, but it seems like these past few years have seen a surge in edgy vital music and I’d love to believe we are part of the same historical thread.

The concert itself sounds like a thoroughly pleasant and relaxing back drop for a live performance; a sun-kissed friend’s garden in Ferrara. What is your connection with Italy? Also, whereas live albums can often strike fear of stadium-aping nonsense, this is a great performance. How, do you remember the performance?

I think we played a lot of these songs better in the garden than we did 20 years ago. We sat in the songs better and my voice has finally made it past puberty. That’s why we wanted to release this performance, not as a vanity piece, but because we really believe it’s valid.

The first time I toured Italy was in 1997. I made a tonne of friends then that I kept through the years. Each time I’d tour I’d make more friends. I also discovered the cantautori along the way and this made me feel even more like artistically this place as for me. ‘Singing’ the way I ‘sing’ in America is unique, in Italy it’s common place. There was also always a minor cultural calling as well since my family is of Calabrese-Irish roots, but the real nail-in-the-coffin for sealing my connection to Italy came when I met my wife in 2006. She’s a marchigiana and hence we found ourselves in Italy all the time. I’m also an importer of Italian craft beer and small estate wineries so at this point there is really no separating me from Italy. In fact, last year I even became a citizen since it seems like I’ve got one foot planted on each side of the Atlantic.

The music media has given The Van Pelt a cult band status, and if you look at the other acts that you’ve collectively been involved in, the calibre of bands you’ve been in/been related to, literally, is really something. I love bands that burn brightly and then go, I think that in part helps a band to gain a cult perception because they dictate the access, or lack of, they offer their fans in quite a dramatic way. Do you see The Van Pelt as a ‘cult’ band or band that created a ‘cult’ body of work? What’s your take on the term? Are there bands you’d consider to be cult bands to you?

That’s so great to hear. I feel like we brought it upon ourselves - the bands we were always inspired by were also obscure cult bands. The Dust Devils were a NYC post-no wave band that inspired me that I’m surprised never made it to cult status, but I’m just free-associating and could come up with zillions if time permitted. Again, I’m out of the loop for current music but I truly hope the kids never stop digging deep into obscurity to find gems from the past like was requisite in our generation.

How did you come to work with Gringo Records on this release?

Old old old mates. We saw the Bob Tilton era of bands in the UK as our brothers in arms and made sure we linked up with that crew on our first UK tour in 1997. I kept going back to the UK with my post Van Pelt bands and even lived in Glasgow for a while playing guitar for a band called Pro Forma, so I stayed tight with Matt and the Gringo Family. It’s an honour for us to finally get to put something out on that label.

I understand this album marks an exciting cross-roads, in that you are now working on new material together. How has that been, penning music again with old band mates and friends? Are you same the people who made Sultans Of Sentiment? Are you the same musicians?

Well, this is all still in the theoretical stages. When we met up at the farm outside of Ferrara to practice our songs it was difficult to stay on point because we all play so naturally together that songs seemed to have wanted to be written. And yes, remarkably we are similar musicians to the ones we once were, we’re even almost the same band. The trick is that none of us live that close to each other so it might take another tour for songs to officially form.

Following on from that, what are your plans with this music? Is there ‘a plan’? Will you be releasing a new album, or touring at all?

I love Italy, and Spain, but we’ve already revisited that. Now I’m dying to play pub and squat shows in the UK, Benelux, and Germany; if that could happen we’ll be there.

Finally, what’s your favourite live album, and why?

Tramoto - Live In Ferrara by The Van Pelt is out now via Gringo Records & Flying Kids Records. For more information about the band, please visit their official website.