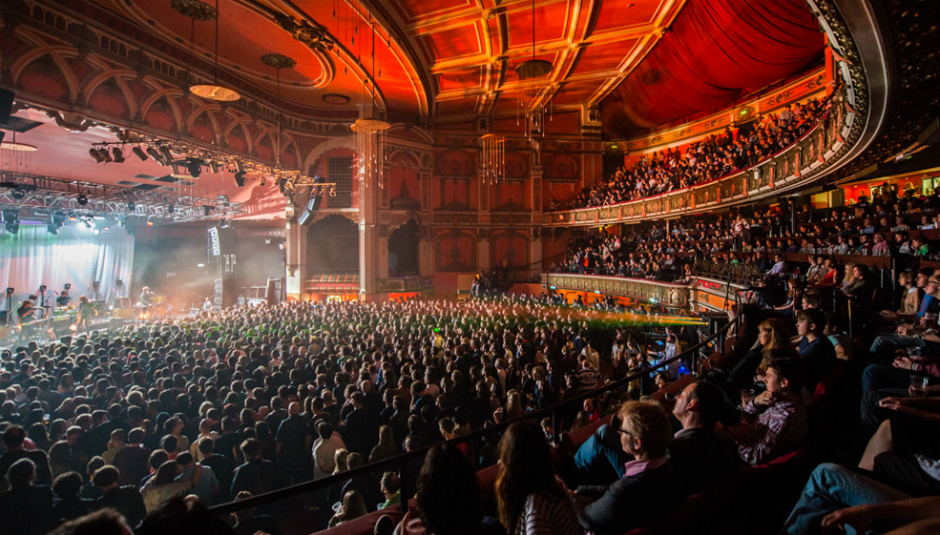 In a city that’s fighting what often feels like a losing battle for musical prominence on two fronts, Liverpool Music Week can sometimes seem like less of a celebration and more of an outright necessity. After all, this is a town that sometimes looks as if it might never get out from under the slowly suffocating legacy of The Beatles in terms of its musical legacy; just taking a walk through the city centre, the Fab Four feel like a permanent presence in a manner that none of the Manchester bands seem to have managed just along the River Mersey, from the Hard Day’s Night hotel to the statues of Eleanor Rigby and John Lennon - not to mention the museum down at the Albert Dock, or the fact that the city’s Cavern Quarter is named after the club at which they made their name.

Plus, in terms of the present-day live scene, it’s hard to shake the sense that Liverpool is living in the shadow of Manchester; with the two towns so close, it was always inevitable that one of the two would have greater pulling power for bands and promoters and so it’s proved, with the latter’s raft of venues and huge student population helping make it arguable the musical capital of Britain outside of London. By the time Liverpool Music Week swings around each October, the opportunity is obvious for Scouse gig-goers to not only enjoy a schedule to rival their north-west neighbours, but to place down a marker of their own in the process. Little wonder, then, that the festival is now in its eleventh year.

The 2016 edition saw a raft of changes, too, with a move away from being based at Camp and Furnace making the shows more accessible for visitors from out of town. In accordance with the break from tradition, proceedings kicked off with the opening party within The Dome at the city’s Grand Central Hall, a room seldom used for live events.

A particularly pleasing aspect of this year’s lineup was the presence of a raft of emerging Liverpudlian bands, and local three-piece All We Are officially open the festival with the first set of the evening - one that leans heavily on last year’s critically-acclaimed self-titled debut album. Since officially wrapping touring for that effort, they haven’t played a ton of live dates of late, but this isn’t a performance with any shortage of polish; tight when it needs to be, and languid elsewhere. They’re a stylistically diverse outfit, from the soulful strut of ‘Utmost Good’ to ‘Honey’s Wild Beasts-referencing funk, and it’s a testament to the Liverpool music scene that it’s taken a group this diverse - both musically and geographically, with the individual members hailing from Brazil, Norway and Ireland - to its collective heart so quickly.

On headline duty, meanwhile, are Warpaint, making only their third appearance in Liverpool and their first since February of 2014. They’re back in town behind their third full-length, Heads Up, and with a setlist that runs the gamut from debut EP Exquisite Corpse right through to their latest cuts. In terms of the new material, the tracks hit both ends of the spectrum, from the sparse likes of the title track and ‘The Stall’ to some of the most dance-friendly music they’ve made to date - ‘New Song’ and ‘Whiteout’, especially. The LA quartet do a fine job of making the set feel cohesive, though, and that’s down primarily to two major factors. First, they have the uncanny ability to drench their songs in palpable atmosphere - something that tonight’s ornate surroundings do little to negate - and second, the rhythm section, comprising Jenny Lee Lindberg on bass and Stella Mozgawa behind the kit, are without compare within the world of indie rock. Both play in an off-kilter style that seems to dovetail perfectly; they lock into each other’s grooves uncannily, and in a manner you can’t imagine that either would if they were playing with anybody else. Closing the main set on an out-and-out pop one-two of ‘New Song’ and ‘Disco//Very’, the encore’s an ambitious affair - with ‘Biggy’, ‘So Good’ and ‘Krimson’, they’ve plumped for three deep cuts - but it’s one they pull off with aplomb. Consider the curtain well and truly raised.

The festival’s second night sees an intimate headline show from iconic purveyors of melodic grunge Dinosaur Jr. at the Arts Club, with frontman J. Mascis spotted spending the afternoon taking a stroll down Bold Street and - inevitably - turning a few heads, tracksuited rock and roll Gandalf that he is. They’ve never been known for their compromising approach to the volume dial and, accordingly, local outfit Sheer Attack are sensible openers, whipping at least two members of the crowd into a frenzy with what might be the smallest mosh pit of the festival. Pitching themselves somewhere between raw punk energy and crushingly heavy blues, frontman Russ Longmire turns in a visceral energetic performance, and one that’s not mirrored by the crowd’s response. Certainly wasn’t for lack of trying, mind.

The headliners, meanwhile, arrive with momentum to burn, having released the latest in a string of rapturously-received full-lengths since Lou Barlow’s return to the fold in 2005 this past summer. Give A Glimpse of What Yer Not is well-represented on the setlist - the solo-heavy likes of ‘I Walk for Miles’ and ‘Knocked Around’ being amongst the highlights - but it’s when they’re joined by other recent tracks, like ‘Watch the Corners’ from 2012’s I Bet On Sky or ‘Pieces’, from the 2009 Farm LP, that you realise just how strong a late career run they’ve been on since the original trio got back together. There’s plenty of room for classics too, of course - chief among them the noodling riffs of ‘Start Choppin’ and nineties favourite ‘Freak Scene’ - but it says a lot about the vein of creative form that Dinosaur Jr. seem to have tapped into that it’s the newest material that sounds the most engaging tonight. There’s little in the way of audience interaction, but then, Mascis has always been for doing his talking with his six-string.

The above date should indicate that ‘Liverpool Music Week’ is actually a misnomer, although forgivable on the strength of the week’s run-in, which features, among others, a slew of ‘Breaking Out’ gigs in intimate spaces, with Amber Arcades and Let’s Eat Grandma among the acts topping the bill. In keeping with the move to a host of new venues for this year, the festival comes to a close in the chilly surrounds on the North Docklands, across three recently-opened creative spaces - Meraki, North Shore Troubadour and the jewel in the area’s crown, the Invisible Wind Factory. It’s there that local boys Clinic play a typically ferocious headline set, albeit to a less than capacity crowd, but the evening’s most beguiling turn comes instead from another, equally enigmatic Liverpudlian outfit - Barberos. Blending psych and electro, they’ve always conducted themselves in shadowy fashion, but that doesn’t mean they haven’t pulled out all the stops for what they’ve branded a ‘spandex party’ in celebration of their self-titled album, released the same day. It’s a pulverisingly loud affair, and features appearances at different points from both All We Are and another local trio (this one born and bred), Stealing Sheep. Purely in terms of the reaction it elicits from the crowd, this is far and away the evening’s biggest talking point - and feels like a particularly fitting way to round out another successful edition of the festival; all the focus is on the future, not the past.

“The most interesting things in life ...

"I have no opinion on what other peop...