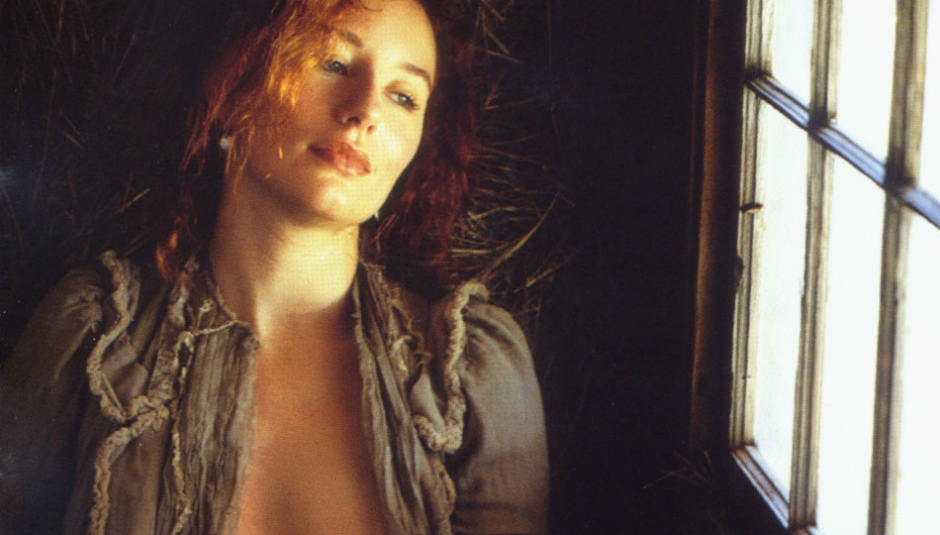 When piano prodigy and singer-songwriter Tori Amos released Boys for Pele in January of 1996, all people could talk about was that photograph. In one picture from the album artwork, Amos sits inside what appears to be the same Louisiana farmhouse pictured on the album cover. There is a large window to her right, cut into six panes. Amos has a tired, distant look on her face, her red hair slightly dishevelled and falling to frame her face. One earring, on her right earlobe, is visible; otherwise, no makeup or jewellery shows.

Amos is wearing a tan, ruffled, and completely unfastened button-down shirt. Though her shirt is open, the tableau is modest. Most notable is the pig. Amos holds a four-day-old pig, whose name was later revealed to be Dusie (or Pig, depending on which account you believe). She cradles him like a baby, one hand splayed to hold him, his corkscrew tail resting against her thigh. Dusie appears to be suckling from her left breast. His snout covers Amos' left nipple; her right nipple is hidden by her shirt.

The photograph, taken by longtime Amos collaborator Cindy Palmano, was even made into a billboard by Atlantic Records, the label that Amos contemporarily called home. Many complaints were levied in response, as was to be expected. It proved so controversial that UK versions of the album's songbook had to be released without it.

For all that could be read into such a photograph, the dominant reading posits that the photo replicates a Madonna-and-child pose:

"The Madonna and child portrait is evident in the composition of the photo: Tori’s in a barn, she’s holding a piglet instead of a baby in a very motherly and nurturing way and her distant gaze is representative of the way the Virgin is pictured in those paintings. This soft and distant gaze, which translates a deep feeling of sacredness is all the more ’shocking’ to a lot of people’s sensitivities because her blouse is wide opened, almost revealing her left nipple while she presses the little animal against her breast. The joining of the sacred and profane was nothing new in 1996, but the animal’s presence hits a sensitive chord in people; one they were most often unable to articulate." (Desbrun)

Ultimately, however, Amos herself favours thinking of Dusie-Pig as a symbol of the unconscious. In an interview with JJJ FM (Australia; February 23, 1996), Amos said, "The record is very much about exposing that which is hidden in the unconscious. That's why a lot of the record is kind of metaphorical work --nurturing that which has been hidden, non-kosher if you will."

To reiterate, this was January of 1996, the same month and year that Garth Brooks refused to accept an American Music Award for Favorite Overall Artist on the grounds that Hootie and the Blowfish had been much more important. Mariah Carey was the woman to watch, holding tenaciously to the top of the charts with her Boyz II Men duet, ‘One Sweet Day.’ (Carey would later lose that position to Celine Dion's ‘Because You Loved Me’). The Spice Girls would release ‘Wannabe’ a few months later.

For those looking for subversive icons — especially female ones — in the music industry, it was a bleak time of marketing disguised as wan "girl power." The previous year had seen landmark releases such as Björk's Post and PJ Harvey's To Bring You My Love, as well as some important but more commercially accessible albums like Alanis Morrisette's Jagged Little Pill. Yet, something was still missing.

Harvey hadn't been afraid to sing about unplanned pregnancy (on ‘C'mon Billy’) and killing her daughter (on what was bizarrely a hit single, ‘Down By the Water’), but there were still some literal no-mans-lands in music. Only Amos, it seemed, was willing to fully excavate the female unconscious and take on the roles she found therein. On her previous album, Under the Pink, she delivered songs like “The Waitress” and “Yes, Anastasia” which touched on violence among women. Now she was excavating the violence within women and how it runs parallel to—or even entangles—feminine sweetness. Amos made both the fury and the kindness sacred on Boys for Pele.

To expose the unconscious, Amos had to go back to her roots. Not to her mother's Cherokee or her father's Scottish ones, but to her own—the roots from which she grew in church. Raised as a minister's daughter, Amos was familiar with the acoustics that churches could provide. For Amos, recording in a church was also about “the idea of speaking my truth, no censorship, in a place that did not honour anyone's truth unless it was the church's truth,” Amos told the Cincinnati Post in an article published on January 11, 1996.

The majority of Boys for Pele was recorded in a small church in Delgany, Ireland after Amos surveyed seventeen churches in County Wicklow. (More recording was done later in New Orleans.) In order to make a recording booth in the church, Amos was essentially boxed into a cabinet with her piano and two holes left open: "The acoustics were great. Even though I was cooped up in a box for most of the recording sessions. I practically lived in it. Me and my piano, where two holes were left open. A German magazine [Keyboards] even made pictures of this."

Given the cult-classic status that Boys for Pele now bears, it's hard to remember what was at stake for Amos then and how much strength she had to find within herself to make a record that was more experimental than her two previous releases. Amos' first album, Little Earthquakes, had earned her a Best New Artist Grammy nod, while Under the Pink featured critically and commercially successful singles like "God" and "Cornflake Girl.” In releasing Boys for Pele, she had to put faith in lead single ‘Caught a Lite Sneeze’—a song full of lyrics even more esoteric than usual; background vocals wailing about Inanna, a harpsichord on prominent display, and a confusing video in which multiple Toris escorted another Amos to the underworld. Not exactly what mainstream radio was itching to play in 1996 (if ever).

Amos took other risks at the time. Having recently broken up with her producer and longtime boyfriend Eric Rosse, she stepped into the producer's chair for the first time. Her record company, Atlantic, had doubts about her production abilities, especially since they had been hoping she would release an album full of more songs like ‘Cornflake Girl’, In one live recording from Boys for Pele's Dew Drop Inn Tour, before a performance of ‘Marianne’, Amos said just how intimidated she was by her label's skepticism of her production skills. She would go to ‘Marianne’ and play it over and over, letting it be both her hiding place and place of power.

But this was a time in which Amos was feeling at her most personally disenfranchised. "I had to write [Boys for Pele] in order to even walk outside of the house by myself," she told Break on August 14, 1996. While she had long turned to writing music for comfort, having to also adopt a producer's ear for the music was a monumental task for the emotionally depleted Amos.

And she probably knew that a feminist rock album full of harpsichords, suckling pigs, and references to pubic shaving wouldn't be the first female-produced record to win a Grammy, but she made it anyway. Rolling Stone's Evelyn McDonnell agreed that the risks paid off: "Left to her own production, Amos takes chances with her songwriting, relying less on endlessly repeated choruses, and experimenting with strings, New Orleans brass and gospel choirs," McDonnell wrote in her review published February 8, 1996.

Though Amos has described the album in many ways, she invariably traces its genesis to her breakup with Eric Rosse, her boyfriend of seven years. It made Amos realise she had a void in her life that she always looked to men to fill. "This record I'm calling my 'boy' record, which means it's my womanhood record. Because, whatever you think of this, the truth is that when I wasn't behind the piano, I lived through the men in my life in certain ways, not as a creative force, but I looked for my woman's worth through their eyes," Amos said in an interview for Live105 San Francisco on February 7, 1996. According to Diva's February/March 1996 issue:

"I wrote this record because I was trying to fill the void anyway I could," she says, tears in her eyes. "After nothing worked - men, food, incredible Chardonnay, shoes - there was no anchor to hold on to, the old ways didn't work anymore. I realised I'd suppressed a lot of sides to myself to be loved and understood by men. I didn't want to play seductive little girl or ballbuster anymore. With this record I played all those roles until I got to my heart. To find your fire as man or woman you have to take your torch and go to the shadows."

Indeed, on Boys for Pele, Amos does play the role of both seductive little girl and ballbuster, but these are just two of the fragments of herself she seems to be reclaiming. The muggy sexuality of ‘Little Amsterdam’ includes lyrics like "Mama, it wasn't my bullet," – about as seductive little girl as one can get. ‘Blood Roses’, features the lines "I think you're a queer" and "I've shaved every place where you been, boy.” It’s a song about a woman taking back her power in the only places she has left.

“Pele’s a really pure work, like it or hate it. There are no ‘trying-to-be’s on this record,” Amos told B-Side for their May/June 1996 issue. While reviewers mostly loved Amos’ fuller sound and resonant acoustics, many were puzzled by the album’s lyrics. Gina Arnold, writing for Metroactive Music, quipped that “you may as well skip it in favour of something a little bit more intelligible--like maybe Gravity's Rainbow, written in Greek.”

And yet Pele prevailed, charting and selling well, going Platinum in the United States and Australia, and Gold in the UK and Canada. It was nominated for a “Best Alternative Album” Grammy and featured on a handful of year-end lists. More importantly, the album has asserted the impact it’s had on the lives of its fans. Jason Diamond recounts the album’s importance during his first experience of sexual rejection for The Rumpus, citing the album as “a perfect initiation into truthful, gorgeous intimacy.”

That intimacy is what at the heart of Pele’s fire. The album is not about a breakup. It’s about surviving any painful loss, finding uncharted strength within oneself to turn the ruins into something better. When Amos found her courage, she used it to create an 18-track classic record, one that she recorded and produced completely on her own terms. With her own fire.