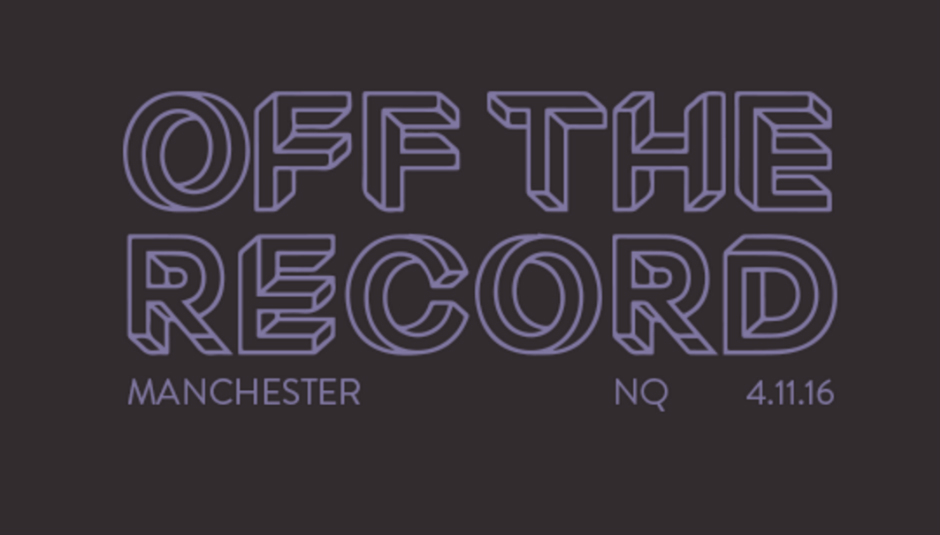 Record labels potentially miss so much great music through passing judgement on a band’s online presence; often it’s impossible to tell a band’s worth before seeing them live. Off the Record's approach to releasing their line-up for the festival combats this somewhat; no acts get released until 24 hours before the event. The industry relies on trusting a series of curators, and don’t have time to second-guess what’s on offer.

This spontaneity stems from co-organiser Dave Pichilingi, who’s seemingly rekindling some of the magic an old inner city festival had. “I worked for many years with Tony Wilson on In The City festival in Manchester, which is where Muse, Coldplay, and other bands got signed. We’d trawl through demo tapes and we’d pick what we consider to be the 54 best unsigned bands, and people would come and see music without knowing what to expect.”

So what stopped it continuing? “Myspace killed all of that. It made the way you consume demo’s completely differently. It meant A&R didn’t have to come to Manchester anymore.” Luckily, they’ve now picked up the pieces and are re-establishing an industry-oriented event that encourages a flow of scouts up to Manchester and puts curators in control. It’s a clever manipulation of modern conveniences to bring back old tradition that should never have left the city.

It’s great news for the fans, too, offering the opportunity to get out and about to find breaking talent without too many preconceptions. It’s also a healthy return to putting away digital discovery platforms for once and using the streets as a place to see a band in a tiny venue before they break. After all, the untamed wrath of the Internet engulfs larger and larger portions of society, eating its way into every corner of most people’s lives. So it's essential to see what's done better the way it was done before the Internet, and what's not.

The resurgence of vinyl sales indicate that there’s definitely an appetite for the old school, and an understanding not everything new is more advanced. It’s just a matter of identifying which lessons from the past are most important to bring forward apart from the aforementioned hauling in of talent scouts in person. Pichilingi points one out: “There’s a problem with how new music’s allowed to develop and grow.”

“Go back 15 years ago, and music was allowed to breathe and have space, and allowed to develop. You might discover something you tell your mates, your mates will tell their mates, and it would take several months to build. It was a really cool organic thing. Now, as soon as someone has one song, everybody gets excited very quickly and the musician is under undue pressure and duress to deliver the album."

So to follow Pichilingi’s advice, band’s could begin relinquishing focus online early on – and imagine the impact. People out on the streets, off their phones, and focusing on getting the band tight and re-establishing a local movement where the only way to hear the band is to go to a club. Simultaneously, the band gets to hone its sound and write songs without being subjected to thin, temporary stardom. Surely a strong, creative decision.

Our conversation doesn’t cover any further approaches in adopting the retro ideas that could benefit the future, and instead moves to acknowledge the cultural changes in Manchester that the internet has created for what they are.

“In my day, you had pocket money, you could invest in music. You decided what you wanted to be: ‘Should I be a mod, should I be into grunge, a goth, should I be as skater?’ You invested your money, in that you dug into a subculture. That informed the way you dressed, it informed the drugs that you took, it informed everything. Now, you’ve got the world’s jukebox at your fingertips and it doesn’t cost you a sausage – you can listen to everything. There’s no need to have to decide whether you have to be that or that or that.”

Although it’s quite sobering to hear a theory that the Internet has led to the death of defined subcultures to an extent, Picherlingi doesn’t think it’s necessarily a bad thing. “It’s just different. If you’re 16, your rock & roll is just as cool as my rock & roll. The discovery of new music is still the best thing in the world, and there’s still unbelievably great music coming out. Just no scene to pin a duffel coat to.”

Despite accepting that the digital age has transformed Manchester to said condition, I can’t help but feel a slight envy for the Madchester era that was about to kick off 30 years ago. But as a visitor to Manchester now, it’s important to respect it as a cultural phenomenon for what it was, and not go out looking for what the next big thing. It’s natural to want to find it because when something as huge as that has happened, there’s always going to have pressure to reproduce greatness. But it’s an unnecessary distraction to be comparing the present with the past in terms of that because it was a unique time, and also because it was something Manchester needed musically, culturally, and sociologically.

Phil Saxe, former A&R of Factory Records and co-inventor of Northern Soul, explains. “Salford had a particular influence. I thought we were a bit more depressed than other parts of the country. We had a case to prove after we’d been in the shadow of Liverpool for a long time; it had its Beatles infatuation, and after The Beatles everything sounded like The Beatles. Also, Liverpool were ruling the roost in football. A lot of that all comes together. So [Sir Alex] Ferguson was as important as The Mondays in a way, because it made the city more vibrant, to believe in itself, to express itself, and then develop an identity which then spreads. The obvious thing is band’s change their image to become a part of it; the Stone Roses stopped becoming a goth band to become a baggy band, The Charlatans dropped the leather jackets to start looking like The Mondays, Oasis come out of that whole scene and fill the gap as Stone Roses weren’t recording. There’s a swagger or a cockiness probably summed up by Shaun Ryder or Liam Gallagher.”

This identity and enthusiasm has certainly benefitted the city and sustained a buoyant attitude to the place to this day, even nearly 30 years after the e-scene hit. However, an awareness should be given to the negative effects that the commercialisation of Madchester has had when it’s been misappropriated.

Johnny Marr wrote in his autobiography: “People flocked to the city to join the ‘Madchester experience. Suddenly it was the hippest thing in the world to pretend that you come from the most socially deprived area of the city and speak as if you were a barely educated urchin from a young offenders institution [….] What had started out as authentic had turned into a depressing stereotype of the northerner, which set back the image of the northern working class for years, and created the dreaded cultural phenomenon that is the Manc Man, or professional Mancunian.”

So it’s not all rose-tinted, and the gang violence that started as a result of the drug trade still casts a shadow over the city to this day. But there’s no doubt that Manchester, even though it doesn’t have the scene it once did, is a hotbed of talent that’s out there in a different way. And with an awareness that some things aren’t always done better online, hopefully these young bands championed by Off The Record can go on to do great things, with the festival playing a historical role in being the start of a great new future informed by the past, but living firmly in the present, with no pressure to recreate the impossible.

For more information about Off The Record, visit the festival’s official website.