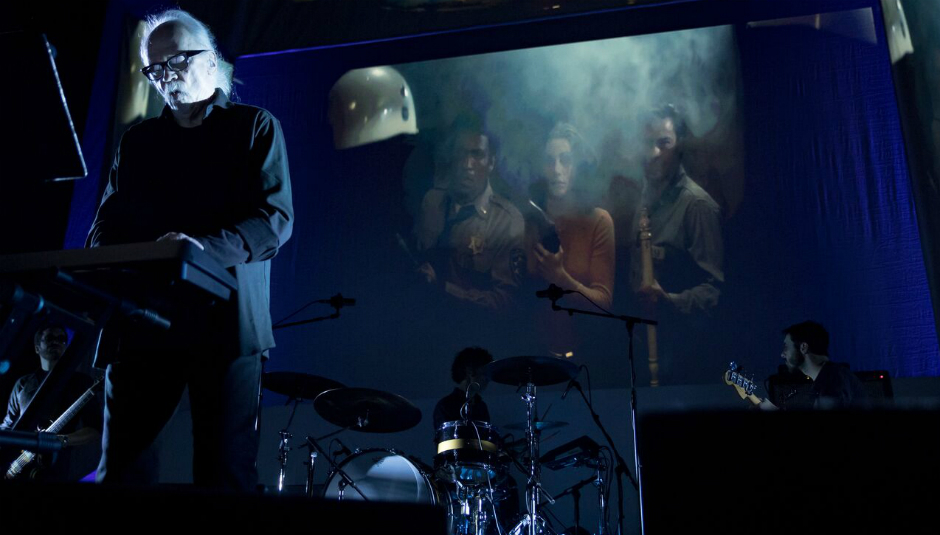 The sentence “Hello, I’m John Carpenter…” is a simple one when you break it down. All it is is a simple salutation, but its effect was devastating. It turned a few hundred people into a jibbering, shouting, frothing mess. Very similar to watching one of Carpenter’s films. But I’m getting a bit ahead of myself. Let’s rewind things slightly before we continue.

John Carpenter has been making horror and action films since the late 1960’s. Films like Dark Star, Assault On Precinct 13, Halloween, The Fog, Escape From New York, The Thing, and Big Trouble In Little China really put his name on the cultural map. But as well as writing, directing, and producing these films he also wrote ground-breaking scores; stark synth soundscapes filled with chilling motifs and eerie moments that really helped cement the vibe and feeling of these films. And it’s thanks to these that hundreds of people have braved a cold October evening in Brighton to watch a master of screen become a master of the stage on his debut UK gig.

Carpenter begins with ‘Escape From New York’, and while it might not have the bombastic opening of other themes, it did say, “Don’t worry, while I’m opening with a classic, I still have plenty of bangers left up my sleeves”. As he and his 5 piece band play, I’m transported to my friend’s parents lounge one summer holiday, where we watched film after film and slowly became obsessed not only with his films but his music. During the song, a screen behind them playing a condensed version of the film, hammering home not just not just where the theme was from, but where it fitted culturally.

After just one song, we’re in the palm of his hand. “Hello, I’m John Caprenter…” he says before launching into ‘Precinct 13’. Since I’d first seen this film as a 15-year-old, it has stayed with me, partly down to the exquisite minimal electronic score and its catchy theme. The footage that plays in the background of deserted suburbs and inner city sprawl coupled with the heroes of the film slaying an unending army of gang members really helped ground the feeling isolation and violence that permeates through the music, and I’d be lying if I said this wasn’t the highlight of the set.

At the back of all of our collective minds is the thought, “He won’t play any new songs will he?” The answer to this is yes, and while there’s nothing wrong with ‘Vortex’ and ‘Mystery’ they don’t have the bite of the opening salvo. After though, Carpenter and co. launch into ‘The Fog’, ‘They Live’, and ‘The Thing’, three films that turned Carpenter from an underground hero to mainstream superstar, thanks in no small part to their delicate, eeriely suspenseful synth scores. As the footage rolls in the background, the songs take on even more sinister tones, industrial beats recreating the sound, and the feeling, of loneliness in a major city. As it starts, the band don black wayfarer sunglasses while “Obey”, “Consume”, “Submit”, “Conform” and “Money is You God” all flash up on the screen, slogans that Roddy Piper sees in the film when he put on his sunglasses. Such touches really show that Carpenter has thought about how the set would look and feel, rather than just playing ‘the hits’.

Throughout, Carpenter speaks briefly, and when the mood takes him, dances behind his keyboard. “I’ve made five films with my very good friend,” he says. “The one film where we had the most fun was about some big trouble in little China.” The audience roars with delight and approval. Seeing Kurt Russell strutting about as Jack Burton on screen while the band plays their hearts out reminds me of watching the film for the first time as a child with my parents, and being on the edge of my seat. As they play, I was back on the edge of my seat again, trying not to blink in case I missed something amazing.

After, Carpenter addresses the crowd again – “I direct horror movies, I love horror movies. Horror movies will never die!” – before launching into ‘Halloween’. By far his most iconic song , the crowd respond with whoops, cheers, and hundreds of devil horns thrust in the air. Carpenter ends on ‘In The Mouth Of Madness’, a lesser-known work in his back catalogue, but possibly his last great film; its inclusion at this point in the set makes perfect sense. After departing to raucous cheers, the band return for an encore, playing ‘Prince of Darkness’, and new songs ‘Vitrual Survivor’ and ‘Purgatory’. Carpenter thanks everyone for coming out, ominously adding “Make sure you get home safely, as Christine might be out there…” before playing the theme from one of his best-loved films.

On the walk home, as well as looking out for killer cars, I play the night over in my mind. Although it’s been a sublime trip down memory lane, there were downsides, most notably the inclusion of five or six new songs. It’s understandable that he’s proud of both the Lost Themes albums, but while the new songs were enjoyable, and sounded like cues from his existing films, they miss that spark all his themes have. This is but a minor grumble though; seeing John Carpenter is about more than a chance to watch edited versions of your favourite films with a live score. It’s a way to watch a legend at work. Carpenter looked comfortable, and at times like he’d been playing live for years. But as Jack Burton would say, “It’s all in the reflexes…”