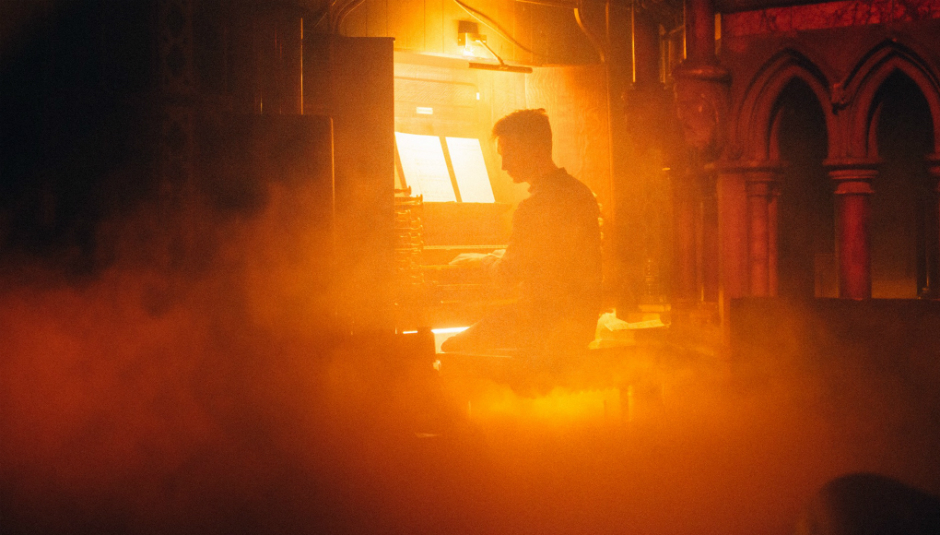 A versatile and mutable artist, James McVinnie has collaborated with the likes of Richard Reed Parry (Arcade Fire), Oneohtrix Point Never, and Nico Muhly (Bedroom Community), and has had various appearances at the Royal Festival Hall, the Barbican, and Glyndebourne. Between 2008 and 2011 he also held the post as Westminster Abbey’s assistant organist.

Performing throughout the weekend, McVinnie is one of the figures threading the whole festival together. We explore some of the exciting commissions he’s been asked to perform with the London Contemporary Orchestra, as well as his work with silent film and his involvement with Icelandic label Bedroom Community.

DiS: As an organist yourself, has contemporary/experimental music always been an interest to you or did it come later on?

James McVinnie: I’ve always taken a keen interest in new music but I guess my real involvement started in my late 20s when I left the world of church music. With the freedom that gave me, I began to see a much wider musical landscape and began to explore a more experimental path whilst keeping one foot firmly in the ‘classical’ music scene, playing older repertoire.

The vast majority of your discography features classical/baroque. Is there a reason why you’ve not recorded much experimental music?

Most of those ‘classical’ discs date from the very start of my playing career where I was involved in ensemble playing with various groups. I still tend to divide my time roughly half and half between playing very old music and very new music and, for me, it’s the interchangeable nature of these two repertoires which is interesting. Cycles, my record on Bedroom Community, was the first real album of ‘my’ work as an organist.

Why do you think the organ isn’t used more widely in contemporary music?

The organ is known primarily as an instrument for the church and it will probably never shake that off, but I think that the future is bright for the organ — all of the artists I’ve worked with always fall in love with the instrument and interest is growing. It’s an instrument with amazing flexibility and offers a huge range of possibilities, just in the same way as a rack of synthesizers do. As always, it’s how you present it to an audience that matters.

Bedroom Community are celebrating their 10th anniversary this year, how did you get involved with the label?

I met Valgeir, the founder of the label and collective initially through Nico Muhly and slowly became a part of that family of incredible musicians and personalities. One of the striking features about the group is the fact that everyone is very much on their own musical path but has a deeply felt respect for the work of the other. These bonds have yielded some of the boldest and most groundbreaking musical creations through collaboration and I’ve definitely had my musical horizons broadened by contact with everyone there. I often get asked if I write my own music and the answer is, no, but I do the next best thing which is to play music written by my friends; to bring new repertoire into the world is a huge privilege and challenge. This personal connection to the creators of new music has also informed my own playing of earlier music too and has taught me to be freer with interpretive decisions.

Your programme for Organ Reframed looks like quite the undertaking. How have preparations been for the festival?

Yeah! It’s a massive and wonderful festival. The Union Chapel’s organ project has produced some amazing work but this is the boldest and most exciting yet. I am playing a new film score by Irene Buckley on Friday night for the cult horror film Nosferatu, and then there are 5 new works for organ and strings (and some with electronics) on Sunday night. I’ve been spoilt by having lots of time to prepare and learn the music, so it’s going to be great.

It must be a great opportunity to see such a spectrum of exploration for the organ. How do each of the commissions differ from one another?

Each piece is strikingly different and it’s been really fascinating to see the composers approaching the task in their own way. Irene Buckley’s score for Nosferatu (Friday night) uses the organ in a totally unconventional way, calling for clusters of notes to be played whilst very gradually drawing the stops of the organ out — in effect slowing down the speech of each pipe to an infinitesimally slow rate producing some really striking and frightening effects. She also uses clusters for the bass end of the organ, pitches and sounds which are felt more than heard. Then on Sunday evening, one piece by Mark Fell is rhythmically dictated by an audio file, followed by the players through headphones. Another piece by Alex Groves, ‘On Colour’, takes inspiration from the artwork of British artist Bridget Riley. Riley's abstract paintings are all about the interplay of shapes and colour, massing repeating patterns on large canvases to create a palpable visual energy. Alex's piece conjures up - in sonic terms - the experience of standing in front of one of her paintings. Another piece by Catherine Lamb uses organ as a drone effect with a shifting collage of sounds from the different registers of the instrument together with small microtonal elements from the strings.

What are some of the challenges in learning and performing these pieces?

It’s always hard to play new music because you know that you will always discover more on a subsequent round of performances. I have very limited time with the orchestra, just two days to rehearse with them to get to know all of this music in real life, so I have to try to get the music as much under the skin as possible.

You’re also playing a live commission for the screening of Nosferatu. Have you played for screen/moving image before?

I’ve played for two of Irene Buckley’s scores to date — one is Joan Of Arc and the other Fall Of The House Of Usher. Both are silent films from the 1920s and involve organ alongside electronics and soprano voice. Irene’s score for Nosferatu is for similar forces, the voice is replaced by cello and viola.

Music to silent films is an interesting topic. Originally these films would have been accompanied by improvisation on cinema organs. Full-scale orchestral accompaniment came later — Irene’s scores sit amazingly on top of these old classics, with the organ and voices/instruments punctuating a beautiful wash ambient electronics. Often in film music, less is more — I can’t imagine, say Joan Of Arc, without hearing this score alongside it.

Have you had much time to spend with the 1877 Harrison organ at Union Chapel?

I’ve got to know this incredible instrument really well over the past few years through various great festivals put on at the Union Chapel. It’s a total Rolls Royce of an organ, such a luxurious sense of power and colour with old school Victorian technology.

What are some potentialities of the organ that you’d like to explore in future?

I’m currently really interested in the idea of how the organ can be used alongside live electronics and amplified instruments, and I will be working some more on that next year. I’ve also got a couple of large scale organ concertos on the cards with a full symphony orchestra. Both really exciting prospects!

Organ Reframed takes place in the Union Chapel from the 7 to 9 October. For more information and to purchase tickets, please click here.

“It’s difficult to get these powerful...