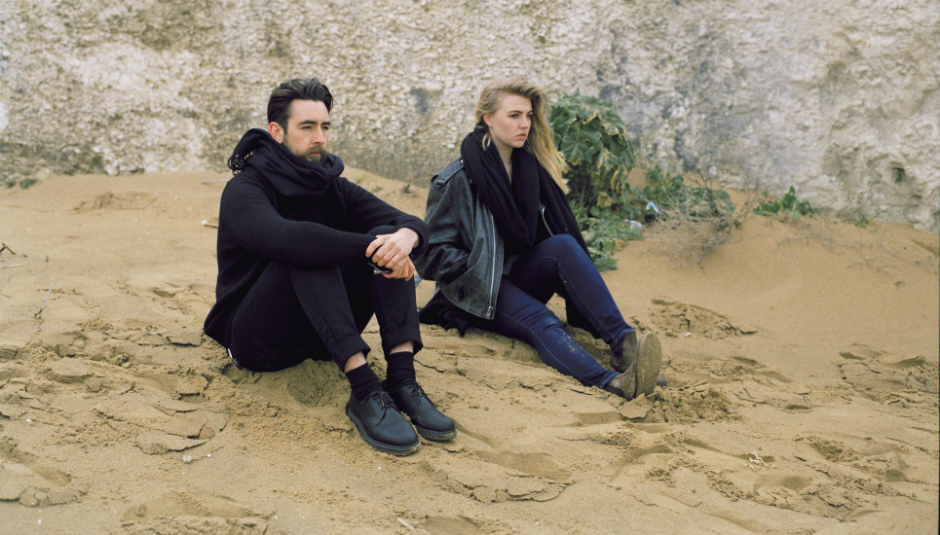 Lately, Rebecca Taylor from Sheffield indie pop duo Slow Club has been going to a lot of weddings. With friends seemingly tying the knot left, right, and centre, it’s fair enough she’s been finding herself asking the age old question, “What am I doing with my life?” Only in Taylor’s case, the answer is a pretty enviable one – spending most days in the company of musical partner and fellow songwriter Charles Watson, playing international gigs, releasing some of the prettiest pop tunes around, and currently undertaking a UK-wide album tour. One could say she’s not exactly missing out on much.

“Yeah boi!” she exclaims, confirming she too believes she’s on the right track. “It’s weird, isn’t it? I’m aware of how lucky I am, we are. At the moment, though, I’ve realised that I’m going to a lot weddings, like friends getting married and life kind of continuing on, and yeah you do ask yourself questions at that point. I don’t have negative or positive feelings about it, but I do wonder to myself sometimes whether if I was actually in one place for long enough, could I ever get married too. I mean, could I ever live that life like a normal person? I think being in the band is very different for me and for Charles. For him, he’s got a wife and he has that whole thing behind him, it’s just different for him.”

And although, according to Taylor, life may be a lot of fun for the singer right now, ten years since forming Slow Club with Watson, she claims she is beginning to notice that little patterns and certain personality traits have developed along the way. Certain ‘quirks’, you might call it. Perhaps it’s true what they say, she ponders, maybe in some cases you just can’t have it all...

“I think maybe for Charles, because he’s got his life sorted, it makes me look at some things. For me, I love this band and I love this life and I love what I get to do – even if not a single person shows up to our show, that wouldn’t change for me – but it gives you a contrast. As much as being in a band is great, sometimes I blame it for the more negative parts of me. I just find that I’m always leaving. Or I’ll create or build something, a friendship or a relationship, and I just find I always get to a point where I have to go. It’s always like: ‘Um, yep, okay bye now’. I haven’t really had the ability to put any roots down anywhere.”

Maybe so in Taylor’s case, but together with Watson, one thing she has certainly been able to establish is a successful band and five full-length albums to show for it. The personal aside, music-wise Slow Club has been winning fans and critics alike over the last decade, with each album impressively showcasing a different side to the duo – from indie-pop, to 60s soul, to lo-fi folk, and now on latest album One Day All Of This Won’t Matter Anymore, slow-burners of the spine-tingling kind. In spite of all of this, she admits she still has an irrational fear that it could all somehow fall apart overnight.

“I don’t know what skills I’d be left with!” she laughs. “It’s weird, but in some ways even though you’re a grown woman, you can still feel like a teenager when you’re in a band. So you do sometimes wonder what would you do if it all came to an end tomorrow. You sort of live day-to-day, you hope for the best. It’s always the best time when it’s time to release an album, that’s where the real fun is, that’s when you’re reminded why you’re doing this and that this is what it’s all about. People have asked us why we chose such a negative album title, and I just don’t think that’s the case. I mean, I don’t see it that way. I will admit that as a writer, I am pretty melancholic, but the actual title is quite positive. I just think, eventually, things don’t matter anyway. Everything that you’re passionate about right now, everything that’s making you upset at the moment – a time will come when it just won’t matter anymore. Whether it’s good or bad, one day you will be over it and you will get through things at the worst of times and you will move through the good things at the best of times, too. I find comfort in that.”

Still, the good times should be soaked right in and every moment enjoyed as much as possible, Taylor is quick to add. Perhaps even more so, for that reason alone. And what better way to celebrate an official decade of making sweet harmonies with Watson than with record number five – this time with an entire band in tow, too. After something of a drawn-out, difficult beginning, Taylor and Watson realised an extra pair of ears was required to help the duo gain a fresh perspective on already-written material and generally lend some guidance from an outsider’s point-of-view. Before they knew it, Watson claims they found themselves in Richmond, Virginia of all places, working with producer Matthew E. White and his in-house band at Spacebomb Studios. The album’s most noticeable element?

“Continuity,” Watson chimes in. “It’s completely consistent, it’s very cohesive throughout. It had so much to do with the fact that every musician involved was playing the same instruments the whole way through the album. I think just because of that, you get this really steady feel across all the tracks. Basically, even though every song is obviously a different song from the last one, from start to finish the sound and the vibe is the same. That heavy element of continuity is something we definitely never had on previous records – maybe a few songs here and there on an album – but not to this extent. It really helped getting someone like Matthew to help us in the studio, especially someone we didn’t really know. You can trust that person to be really objective. Friends are always great, but when someone doesn’t know you, you know they’re going to be completely honest about what they think of your music. I personally do have a lot to thank friends for, though. Sometimes you don’t realise things until you look back and it all makes better sense. Since we formed the band, we’ve had friends say something random or off-hand that you don’t think of much at the time, but then later on your realise how important that comment or advice really was. Little bits of feedback here and there along the way from friends have turned out to be important building blocks from the start. A lot of this band has been kind of a ripple effect where we can see now how one thing led to another and how many things wouldn’t have happened without other friends helping us out.”

In retrospect, Taylor adds, each Slow Club album now serves as something of a unique time capsule, forever freezing in time where she and Watson were at specific points in their lives, not to mention what they were listening to then as opposed to now.

“Our tastes have definitely changed over the last ten years. All the albums kind of feel like pockets of where we were as people and what we were, and also how we were as two people, a duo, working together, collaborating, making music. I think with every album you can hear how our tastes are changing, it’s like a record of that. We’ll always have those albums as little time capsules of periods of our lives, it’s a special bond of an odd relationship. But that doesn’t mean that we can’t do our own thing as well, and we have been. I’ve been doing co-writing and working on music at home and with friends; keeping busy with other projects can only be healthy for this band, ultimately.”

Watson agrees with Taylor, admitting that while other interests and side projects may come and go, there’s always been something special about Slow Club, and neither of the pair can see that flame extinguishing any time soon. After all, when the creative juices are flowing, it’s a pretty good sign you’re onto a great thing.

“I mean, we pretty much made this album in like a week,” Watson offers. “To me, it’s perfect without having it be perfect. It’s a slow-slow burner, for sure, but it was all done in a very quick amount of time. Normally, this process takes us longer, like we’ll really take our time, but this time it was all very intense and quick, although we still experienced that emotional rollercoaster. It was definitely less stressful this time around. I guess we’re just at a point where you realise that you don’t need to sound perfect in the studio. It’s okay if it’s imperfect, that gives it a certain kind of charm and makes it somehow more human. It just feels more real, it feels more grown-up.”

Slow Club’s new record One Day All Of This Won’t Matter Anymore is out now on Moshi Moshi.