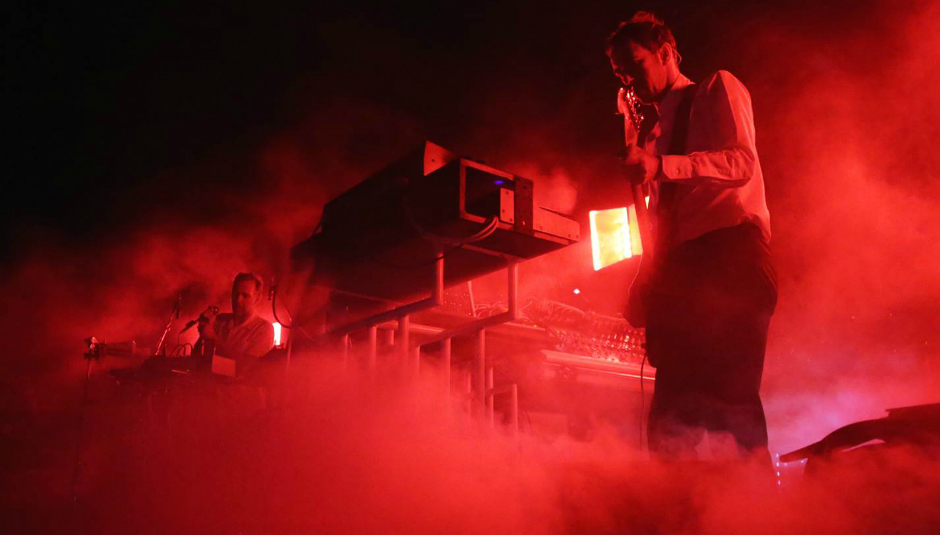 Part Of The Weekend Never Dies: The Evolution Of Soulwax

Part Of The Weekend Never Dies: The Evolution Of Soulwax

Remember when everybody wanted to be the DJ? Soulwax did more than most to make that prophecy a reality. A bunch of raffish Belgians in pastel-coloured bootcut suits led by the Dewaele brothers, they were always ahead of the curve. Of course, the irony was they really did sell their guitars and buy turntables, swapping indie-cool cred for a life as a globe-trotting, never-ending party machine, the last word in ultimate, feel-good, mash-up hits. Who’d have thought that mixing Salt-N-Pepa with the Stooges, or Dolly Parton with Röyksopp, could yield dance floor gold? And all this before anyone lost their edge to the kids and the art-school Brooklynites coming up from behind.

But their arc as a band has been a curious one; as 2 Many DJs became synonymous with industrial sized raves and retina-searing real time visuals blended into the mix, so the memory of the playful group happy to take on Prince hits with cheap Casio keytars faded. It was a shame, not least because Stephen and David were, as a singer and guitarist respectively, a lot more capable than people might have imagined; it takes a certain amount of chutzpah to pull off beatboxing and covering snippets of the Backstreet Boys’ on summer festival stages throughout Europe. But the lure of the night was strong. You could hear it on Any Minute Now, an album that literally opened in the club with a witty deconstruction of dance culture and all the drugs that surround it. And while it was well received, it says everything that within a year they had remixed themselves, and their most recent songs, into the totemic Nite Versions, a thundering record that lays on the pounding pounding techno with a trowel and doesn’t let up for 51 minutes and 30 seconds.

So here we are in Utrecht, in 2016, with a band that only has three albums proper to show for their 20 years of existence (no, we’re not counting This Is Radio Soulwax, or Most Of The Remixes…, or, as good as it is, the Belgica soundtrack), showing signs of life. They’re touring again for a start, and there’s new material. Add in some cryptic tweets about a “TRANSIENT PROGRAM FOR DRUMS AND MACHINERY”, some decidedly Kraftwerk-esque artwork, and you can understand the growing expectation.

This is, so far, the only non-festival appearance they’ve planned, and the confines of TivoliVredenberg’s Pandora seems apt; a dark sweatbox with two balconies, plenty of smoke, and ominous red lighting. Huge banks of analogue equipment litter the stage, along with an assortment of guitars and three – yes, three – drum kits; rhythms, and the textures of the beat, are now so fundamental to what they do that not even two will suffice. It all starts here, each drummer taking turns; building, growing, elements fade in and out until the band are all up to speed, stretching out the legs. There’s an intro of sorts, with snippets of vocals, before the groove settles down, the Dewaeles poking and prodding and twisting the music along. As a suite of new music, it’s tantalising; there’s the familiar warmth, the hint of studied cool, and the overriding sense of a band trying to reconcile the two arms of their art into a fluid, malleable whole.

But then the beat drops out, the quiet, scratchy loop of ‘KracK’ starts up, and the tension builds for seemingly an eternity until the bass and drums kick in; the drop is like a dopamine hit delivered straight to the cerebral cortex. The ripple of familiarity becomes a wave, the dancing becomes manic, and the band shift gears. We get ‘E Talking’, ‘Another Excuse’, yet more new songs, ‘Miserable Girl’, and ‘NY Excuse’, all rolled up into one, glorious 25-minute run. It’s euphoric but gritty, and the changes from hands-in-the-air to get-down-and-grind are effortless, no mean feat given the sheer amount of equipment being played. David even dons a guitar for a few songs. If there’s a regret, it’s that nothing from Much Against Everyone’s Advice or their former life is aired or re-worked, and probably never will be; maybe past glories should remain exactly that.

Soulwax are that rare gem, a contemporary band who understand retromania’s seductive pull and know how to re-purpose the past for their own ends. They’ve re-written the rules of what a rock group playing electronic music can aspire to – playing Daft Punk to the rock kids, or electro to the punk kids, doesn’t seem so crazy now, does it? – and while losing yourself in a song is magical, the dance floor dynamic is a difficult beast to tame. But tonight proved they were special, that the dark of the night is where their heart truly resides. That if you yield, they’ll take you on a journey where your limbs flail and you grin manically and they won’t let you stop till they think you’ve had enough; why wouldn’t the kids be out till 5am if this is what’s on offer? Carving out one successful niche in the unforgiving musical landscape that is the 21st Century is impressive, doing it twice is just showing off, but the sense is they’re done with apps and soundtracks and crazy ideas that take years to come to fruition. According to their website, Soulwax only have four official dates left in 2016; after that is a blank. One assumes they’ll be back, and that they’re beavering away like mad, musical alchemists on the next stage of their development; or at least, this is the hope. For if part of the weekend truly never dies, Soulwax are current keepers of that flame, and doing a damn fine job of it too.

"After Brexit I've been so politicall...