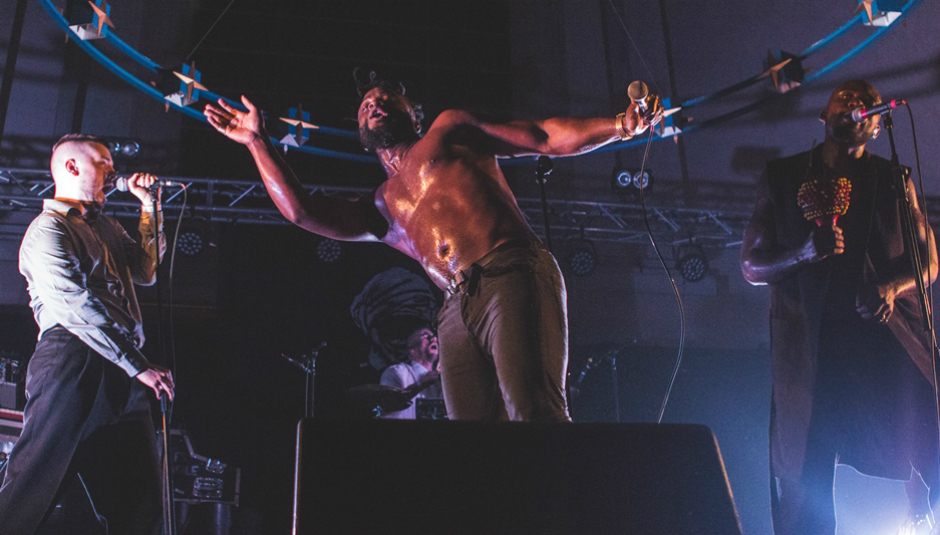 There are things in life that in the years to come you’ll find it hard to believe you actually did; wandering Southwark looking for Mr Mime, screaming drunkenly that Drake is the new Messiah, and voting for Tom Watson. Missing the inaugural Dog Show at Visions festival is also one for the list as, whilst I was snatching extra 'zzzs', a Staffie dressed as Prince was having a Zoolander face off with a Bowie impersonating pooch to be crowned Best Lookalike. Prince, Dave, and Noel Fitzpatrick would all be suitably ashamed by my slackness.

Starting Visions instead a couple of hours later in the deathly bowels of Mangle, Meatraffle get the day off to an even more beastly start. Bathed in blood-shot-eye crimson the band look like the Fat Whites’ reprobate uncles fresh from last night’s bender; the keyboardist is a dirtier doppelganger for Harvey Keitel’s pimp in Taxi Driver and the singer looks like he’s keeping it together a sip of beer at a time. Meatraffle’s sound is as equally strange and disheveled; opener ‘Oppenheimer’ scales unnerving heights with slightly off-key trumpets, nosebleed inducing beats and screams of “Oh my shit!” The airy disco jazz of ‘The Horseshoe’ is one moment of cohesion, save a trumpet drop, from a band that strives to put you on edge.

Walking into the Moth Club midway through Babeheaven’s set, it’s clear singer Nancy is not having the best show. “I’m so sorry, I can normally sing,” she says explaining that she’s lost her voice before going into a cover of Womack & Womack’s ‘Teardrops’. But there’s nothing to apologise for as her vocals are still syrupy smooth and lend the track a dreamy tenderness. A cracking feedback adds to the band’s troubles on the last song of the set and guitarist Milo does a cut motion across his neck and the show is over. Fate wasn’t on Babeheaven’s side this afternoon, but the audience gives the band some loud applause as they leave the stage.

Unlike the packed venues and massive queues at last year’s Visions today is much more laid-back, which seems partly down to a lot of people choosing to skip the bands to baste outside in the sweltering heat. Let’s Eat Grandma still draw a big crowd in St Johns’, although it’s unclear why some people have bothered. As Rosa and Jenny immerse themselves in the subterranean drone of ‘Deep Six Textbook’ there are groups of men laughing and pointing at them. Is it because they’re young, female and doing something away from the norm that’s causing these grown ass men to become playground bullies? I don’t know, but I am sure Eno wouldn’t have had to put with this shit. Luckily the pair’s fearless confidence overshadows this as their set is seamless with the fairytale rhapsody, ‘Rapunzel’ a goosebump-inducing highlight.

Visions always delivers on offering up resplendent new bands you haven’t heard of, and Fake Laugh is one of them; their surf power pop is as shimmery as the Moth Club’s gold encrusted ceiling. "We didn't think anyone would be here," says singer Kamran bashfully to the packed room. Their songs navigate the soapy waters of Blur Leisure and Weezer’s Blue if sung by a recently broken-hearted Everly brother; they’re seriously the dreamiest.

On paper Young Fathers headlining St John-at-Hackney Church seems like a strange choice of venue, but as they stand in a uniformed line beneath the towering stained glass windows - the victorious beats and raised harmonies of ‘Liberated’ playing out - it couldn’t be a more befitting. Kayus, Alloysious, and G perform with every fibre of their being with an unrelenting infectious intensity that you’ll be damned if you don’t follow. ‘Get Up’ and ‘Rain Or Shine’ are ass-shakingly fantastic, ‘Dare Me’ and ‘I Heard’ give a soulful respite whilst ‘Queen Is Dead’ is a disorienting sensory explosion. Young Fathers break as many boundaries live as they do on record; leaving the stage dripping in sweat they’ve more new converts have been made tonight.

Why A Storm In Heaven Is The Verve’s ...