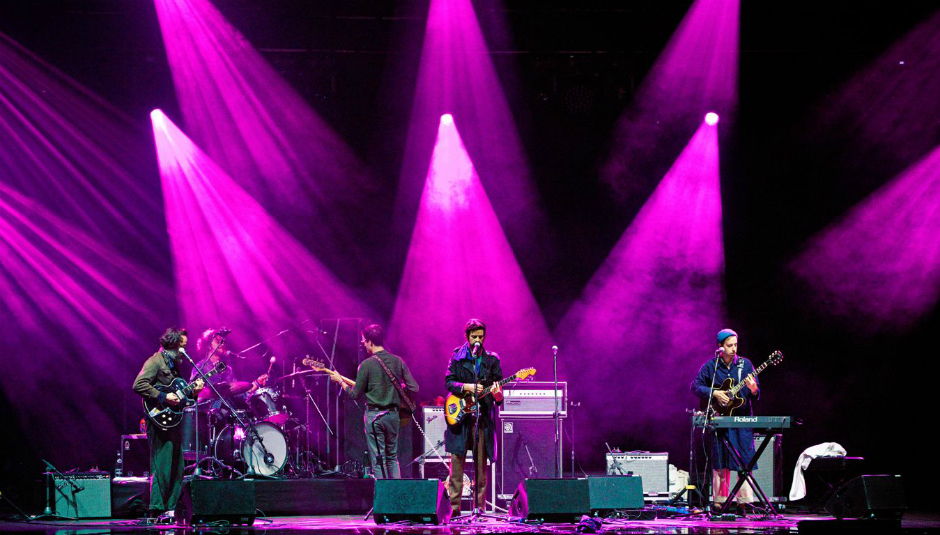 Celebrating its tenth birthday this year, OFF takes place in the city of Katowice; about an hour away from Krakow, it boasts some great bars where you can grab a pint for less than two quid and some great grub, no matter your dietary requirements. It can often be difficult being vegetarian abroad but after a particularly early flight, with a grumbling stomach and half-shut eyes, I stumble into vegetarian cafe the Golden Donkey – and eat one of the best meals I’ve ever had for about four pounds.

The festival’s site also pulls focus towards food and drink, with a designated area where attendees can tuck into the likes of four types of vegan burgers, savoury or sweet crepes, woodfire pizza, curries, and plenty of meaty treats. There’s bars dedicated to traditional Polish drinks – vodka, cider, and syrup anyone? – with seating aplenty, meaning there’s room to have a break from the performances. You’re not allowed to take food or drink outside of this area though, and whilst a lot of people would have a serious problem with that, it means that the festival site is clear of the usual sludge of plastic cups and half-eaten chips. It also means that once people arrive at the stage, they’re there to actually watch the set rather than chug pints.

The expansive array of food can definitely be matched with the line-up at this year’s birthday bash. There really is something for everyone as openers Rosa Vestov’s grungy shoegaze sits alongside Lima’s electronic-synth sing-a-longs; Willis Earl Beal’s artistic and wholly unforgettable set – “Don’t clap! Don’t you dare clap!” – that blends jazz and even classical aspects takes place before Sleaford Mods relentless spits; Devendra Banhart’s iconic, folky melodies wash away the woes of the world whilst Polish Pop Idol winner Brodka proves her worth with a set that could rival the likes of PJ Harvey. The larger stages certainly serve their purpose in providing a unique blend of style but there’s no other setting in the world that could compare to OFF’s experimental stage.

"Experimental" gets batted around way too often in music journalism; to some, it’s a rock artist who’s discovered the electronics of a synth but here, it means Adam Golebiewski sitting the middle of the floor and playing a singular, repeated beat on his drum kit with homemade aluminum sticks for 30 solid minutes. With some audience members scratching their heads, others grinning from ear-to-ear, and others straight-up leaving, it’s a stage that truly takes risks and in a climate that keeps booking the same old dudes for the main stages, it’s utterly refreshing. The experimental stage continues to impress with Jenny Hval; a woman with an uncompromising presence and one that takes 5 minutes out of her set to read a two-page statement about the epidemic of harassment and rape at festivals. Again, it’s a stage that takes risks.

Saturday sees more treats from the experimental stage; Japan’s GOAT are a marvel, with four songs spread out across their lengthy set. Wholly instrumental, the audience is captivated and, like me, wondering how the saxophonist is making those noises with just a coke bottle. Elsewhere, America’s Fidlar provide some sing-a-long jangly riffs that this crowd are all-too-up-for, whilst Lush prove that their comeback was well worth the wait.

The highlight of Saturday however – and possibly the entire festival – is Ghana’s Ata Kak. A Searching For Sugarman story in his own right, Yaw Atta-Owusu self-released an album in 1994, only for it to be picked up by American collector Brian Shimkovitz in 2002. Shimkovitz searched for Atta-Owusu for 12 years, before discovering him in Canada, re-releasing his album on his label Awesome Tapes From Africa and sending him out on tour around the world. 12 years of searching was well worth it if Ata Kak’s set is anything to go by; the man, who is clearly not the youngest of sorts, jumps around on stage with a constant energy; his band, grinning consistently whilst playing a mix of Afro-house and dance and the crowd, hanging onto his every word and straight-up pogoing for 45 minutes. OFF festival are masters at giving a platform to something that would otherwise go unnoticed.

However, Saturday was also when the headlining problems start – The Kills pull out, with GZA cancelling a few days before. The festival is quick to replace them with Wiley but unfortunately, he doesn’t even bother to turn up. Stuck with nowhere else to go, the team push Islam Chipsy and his band EEK – a three-piece who had an early evening slot on the second stage – as the main event.

Hailing from Cairo, Egypt, they’re comprised of two drummers and Chipsy himself – an electro chaabi keyboard pioneer who smiles more than anyone else I’ve ever seen. It’s clear they’re chuffed to be bumped up and as they perform a wall of synth soundscapes and utterly relentless percussion, the crowd’s enthusiasm for an otherwise unknown headliner really does warm the soul. Here they are, with three artists they’ve paid to see not performing, and yet they’ve still got plenty of time to clap along and pull some shapes. Another notable takeaway from this crowd is that they don’t take their phones out during sets – like, ever. British festivals have been met with a flurry of blurred Instagram snaps and shit videos but here, people are truly around to immerse themselves in the experience, rather than boast about it to the void of social media.

Sunday brings forth those J-popsters Kero Kero Bonito and whilst you might not think their output of sampled synths and sweeter-than-your-average song subjects would entice a Polish crowd, OFF once again proves it's open to anything. Groups of guys sing-a-long to every syllable, as the band perform a set that makes the world seem okay for a beautiful 45 minutes. Sometimes, it pays not to take things too seriously. Beach Slang and Mudhoney provide guitar-led treats, whilst Polish hip-hop royalty Kaliber 44 easily pull the biggest crowd of the weekend. Unfortunately the OFF festival bad luck strikes again as Anonhi arrives in Poland too ill to perform. I think if this were to happen in the UK, folks would be storming the gates, tipping over portaloos, and demanding their money back but here, the attitude is very much to just have a good time. It might have been “the most unlucky edition to date” according to OFF festival’s website but boy, do they know how to throw a party in a crisis.