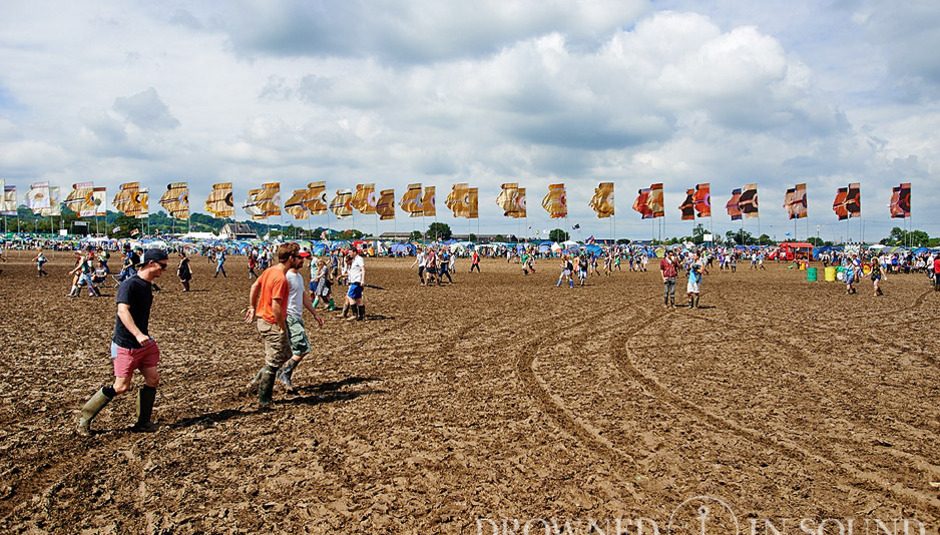 The largest greenfield festival in the world is once again about to descend on the gentlefolk of Somerset, stir up the ground into slurry, and send a couple hundred thousand criss-crossing between Pyramid Stage, Pilton Palais, and Pussy Parlure. As the writer assigned to visit the Glastonbury Festival for DiS - popping my glasto cherry in the process no less - there’s a surreal familiarity to the festival; as if i’m scheduled in to meetup with a national treasure, about to take Elton John and Bruce Forsyth to the bingo. Having perused the endless articles of advice and survival guides (including this classic vintage DiS article), bought a brand new pair of wellies, practiced building my tent, and stockpiled my warmest socks, the only thing left to do is draw up a vague gameplan for tackling the lineup.

Presumably all these plans will go out the window about 3 hours after arriving on site, but the short novel that is the full Glastonbury lineup seems worth familiarising oneself with in advance.

The lineup of Glastonbury itself has always been its greatest strength. It’s able to attract the world’s biggest acts while giving that all important BBC airtime to countless up-and-comers, all clearly good enough to tempt 180,000 visitors to forget about their dislike of cold, wet mud for a few days. That having been said, the big names this year feel flaccid and colourless in comparison with recent years. Adele, Muse, and Coldplay hardly feel like the trailblazing choices of putting Kanye West centre stage in 2015, or Metallica bringing the metal to 2014. A quick run down of the ‘best of the rest’ however, reveals the superior festival always hidden inside Glasto’s glitzy exterior. (Note: we’re not going to get too obvious with this list here. You all already know and are rightly excited about LCD Soundsystem, PJ Harvey, Beck, Foals, Tame Impala and New Order.)

The official programme starts on Wednesday 22nd, with a gentle pre-amble of smaller gigs and happenings - but the meat of the lineup starts on Friday...

Expanding from a club night to a record label, and ultimately into a full blown band, this project updates traditional Thai, Vietnamese, and Laotian folk music into the 21st century. Made heavily under the influence of the sixties and seventies ‘molam’ bands from the region, the group boast hypnotically endless grooves. The droning khaen (like a big bamboo harmonica), twangy phin lute, throbbing basslines, and near-afrobeat drumming form what’s essentially a South-East Asian form of funk. This one should provide the first chance to warm up those legs for all you Friday morning arrivals (don’t forget to stretch before and after).

Every couple of years Britain’s music journalists seem to rediscover grime and suddenly decide they like it for a couple of months. The sheer genius of Skepta’s immense single ‘Shutdown’ was responsible for much reignited interest in the genre last year, and the subsequent album Konnichiwa (which only just came out last month) has lived up to the hype, and delivered the first truly great British rap album in an aeon. He probably should be playing a better slot, but at least you can do some bouncing before the mud gets too slippy.

Having already had the massive pleasure of witnessing Savages absolutely slay the crowd at Primavera a few weeks ago, this writer can confirm they are solidly to be ranked as one of the greatest rock bands on the planet. With the release of Adore Life in January, the quartet instantly doubled their arsenal of searing anthems - but the best bits are when the girls let loose. Expect frontwoman Jehnny Beth to channel Nick Cave at his most snarling and savage, and lumber about the stage possessed. Drummer Fay Milton is guaranteed to blow you away too. Unmissable.

Channeling the more triumphant facets of 90s rock riffing into a 2010s context, Wolf Alice made a big impression on the Park stage at last year’s Glastonbury (see the full set below), making a solid case for their brand of joyous radio-friendly rock so fully realised on their debut full length My Love Is Cool. Having heavily toured ever since, leaving a trail of satisfied customers singing their praises in their wake, Wolf Alice’s chops should be even better refined and even more efficient at dispelling your blues. The forecast looks like they may even make it through their set free of rain this year!

One of the more joyous acts from the mighty Soundway label (and that’s saying something) Batida is the project of Angolan-Portuguese artist Pedro Coquenão. Often sampling deeply funky music from the South African nation of Angola made in the 1970s, Coquenão reassembles them into psychedelic, sunny, and intensely danceable tracks. With the help of some friends manning the mikes and hyping the crowd, it looks like he puts on a great show. Just check out the mini-doc style clip of Batida at last year’s Sol da Caparica festival in Portugal. It seems frankly inexcusable to miss this sort of fun, but Batida is cruelly up against Adele, New Order, James Blake AND M83 on the big stages. At least there’ll be plenty of space to move!

Although we’ll no doubt be subject to countless acts covering the man’s work throughout the festival (my money’s on Muse playing ‘Panic in Detroit’, Coldplay doing ‘Life on Mars’, and Adele doing ‘The Laughing Gnome’), faced with how the festival itself should pay tribute to the late David Bowie, the Glastonbury organisers have chosen to put on Philip Glass’ symphonic reinterpretation of the Heroes album. Philip Glass extrapolated the core musical motifs Bowie and Eno wrote for the album into a giant web of interlocking orchestral tones, and it’s every bit as powerful as Bowie’s original album. Bowie played the second ever Glastonbury back in 1971 (before he’d ever even been called Ziggy Stardust), and closed what Michael Eavis claimed was his favourite ever edition of the festival with a headline set in 2000. Paying tribute to the legend with cover versions or tribute bands would be nowhere near clever or oblique enough to befit the sexy skeleton. Reimagining one of his most beloved works as a symphonic avatar of the man himself will work much better. If that isn’t good enough for you then... there’ll be a laser show along with a live orchestra.

Look. It’s going to be 2am on Saturday night. Adele, New Order, and James Blake all finished hours ago. By this point the festival should be a mess of hundreds of mini raves, and dishevelled folk making their way sheepishly through the dark back to their tents. Anybody wanting to party - and hard - is well advised to find their way to The Cave. The location itself has garnered a reputation as a hidden gem and late night haven at the festival, and this set from British hard/industrial techno producers Perc (Ali Wells) and Truss (Tom Russell) should be one of the best The Cave hosts this year. Dense, super heavy, tribal beats and chunks of commercial grade bass will leave you with little option but to boogie (or puke).

in Conversation with John Harris

Every young voter’s favourite liability is going to be making an appearance at the aptly named Left Field stage. Although it’s meant to be part of the probably far more important Campaign for Nuclear Disarmament, one imagines Mr Corbyn will end up discussing the EU referendum, the results of which may or may not be confirmed by this point in time… Needless to say, anybody who’s lost their phone or forgotten about the outside world will most likely be able to get a solid political update right around Sunday lunchtime from the leader of the opposition himself.

If Jeremy Corbyn didn’t give you your chin stroking fix of clever chit chat, then the jazz whirlwind that is Kamasi Washington should do the trick. The saxophonist stunned everybody with his triple album The Epic last year, practically reigniting the jazz fire that long since fizzled out in the hearts and minds of the mainstream, going back to the tipping point of the late-60s and 1970s, and playing until him and his band could barely breathe. How often do you get to see downright jazz on a great big festival stage anyway?

Admittedly this is far from a deep cut choice, but my ability to enjoy the darker and more serious things in life has simply taken too much of a battering these last few months. The prospect of seeing the mighty songbook of the Electric Light Orchestra brought to life on the Pyramid Stage has got this writer more excited than anything else. Modern electrified radio rock has to this day never been as lush or life-affirming as the songs Jeff Lynne littered throughout the 70s with ELO, and by all accounts the recently reformed group (under the clarifying title of ‘Jeff Lynne’s ELO’) deliver the goods and then some.

Mac DeMarco, the undisputed reigning king of slacker rock and jizz jazz, is well known for delivering sets littered with manic antics and ridiculously rough covers (‘Enter Sandman’). He’s got more than enough of his own hook-laden tunes and chorus-pedal rockers for a lengthy set by now, but the antics are just too good to leave out, and those piss-take covers still regularly crop up in setlists. DeMarco’s the epitome of casual, and effortlessly delivers the goods. The one thing he seems to take seriously is putting on a hell of show, and he’s gathered a lovely group of cheeky like-minded lads in the form of his band to get the job done.

What kind of monster wouldn’t want to see Earth, Wind & Fire?? Annoyingly they’re up against LCD Soundsystem, but if you’re lucky enough to have seen or be going to see them at any of the dozens of other festivals James Murphy or co are doing this year. Besides, Earth, Wind & Fire never felt the need to feint a break up in their five decade history.

Keep an eye on DiS this weekend for photo galleries and our annual 'watching Glast-on-telly' thread(s).

Devin Super Tramp on how to be a seri...