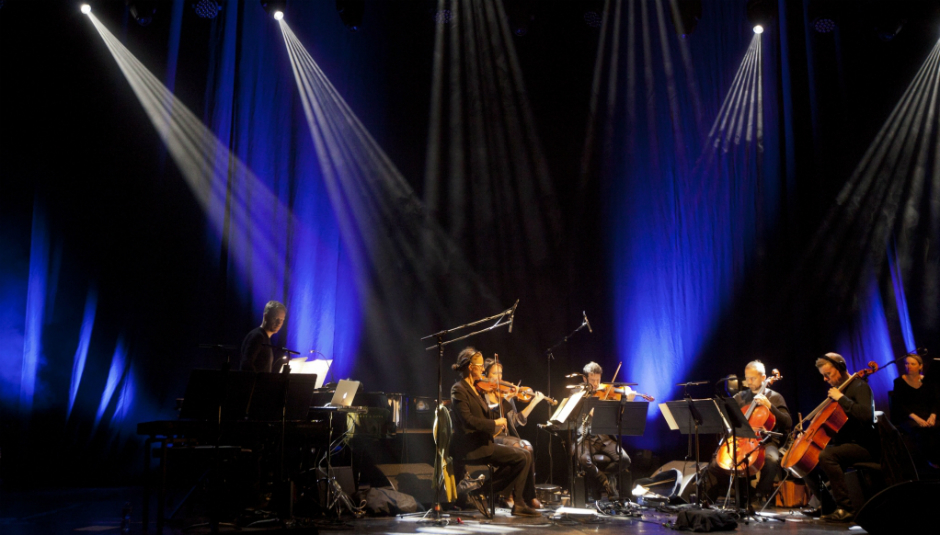 Possibly the only gig this year where slankets are acceptable attire, tonight Max Richter brings his contemporary classical lullaby Sleep to the Barbican. Well, a portion of it anyway - the original work is eight hours in duration, intended as a nocturne to aid sleep. This evening the composer, a lone soprano and a five-piece chamber ensemble perform an hour and a half of extracts in front of an audience including Cerys Matthews and Jarvis Cocker.

Before the main event however, comes a performance in full of The Blue Notebooks, Max Richter’s cinematic 2004 album inspired by the events of the second Gulf War. Featuring layered sepulchral strings over sub-bass and samples of bird song and waves, the piece evokes all the confusion and pain of conflict. Seated on the right of the stage, an actress (taking the place of Tilda Swinton as per the recorded release) occasionally interjects in clipped tones with mournful extracts of novels by Franz Kafka and Czesław Miłosz. The concept in the hands of another composer could easily come across as self-indulgent and shallow; in Richter’s however, it’s an incredibly moving eulogy to loss.

The concert’s second half is unfortunately less successful. Make no mistake, Sleep is a gorgeous (and hugely ambitious) work, wound around fragile piano and string motifs, but in extracted form for the concert hall, it’s left disappointingly exposed. Premieres of the Arvo Pärt-esque work saw it performed in full (complete with beds instead of seats for the audience) and allowed it to unfurl itself within its original and intended context. While tonight’s performances on the parts of Richter’s ensemble are in themselves flawless, cutting the piece up merely allows its repeated simple melodies to frustrate rather than soothe. After the first 30 minutes in which the audience’s pulses and breathing relax as they bed into the music, the performance gradually comes up against brick walls as the themes and motifs cease in their development.

Proceedings aren’t helped by poor lighting - one minute pointed any which way but at the musicians; another, set to bombastic ‘Who Wants to Be a Millionaire?’ mode firing sharp shafts of blue all around the stage. Chief antagonist is a faulty bright orange spotlight slap-bang in the centre of the stage, which pulsates unrhythmically until the technical team decide to cut their losses and point it towards the ceiling instead.

As the light fades after the finale, a few members of the audience in the stalls rise from their seats to applaud, but unlike the composer’s previous performances here, the standing ovation fails to spark a unanimous response.

Both The Blue Notebooks and Sleep are wonderful pieces of art. Unfortunately, one translates more effectively in the concert hall than the other.