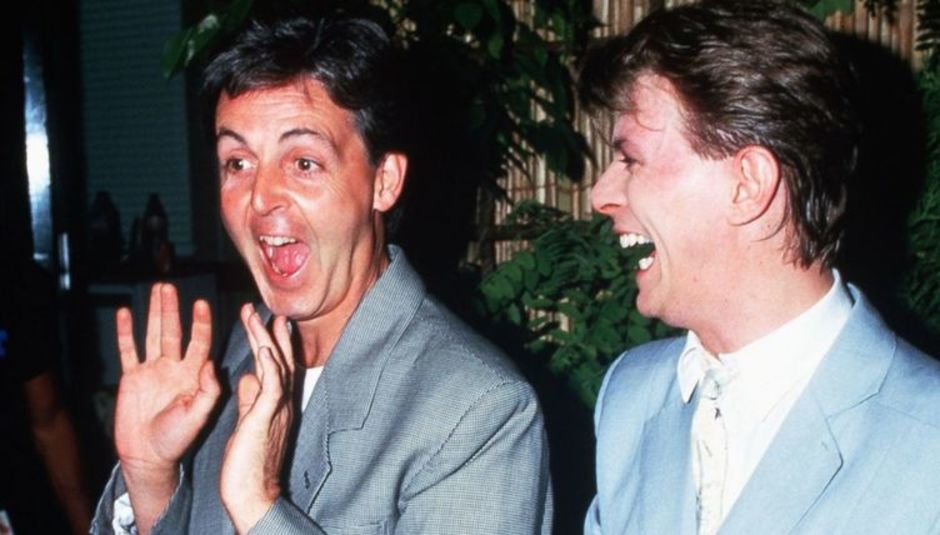 In a sentence which makes no sense outside of this particular split-second in February 2016, Paul McCartney has recorded the first ever Audio Mojis in partnership with Skype for Valentines Day Audio Mojis, naturally, are the next logical step in digital communication. Whereas right now we can all add a frowning smiley to augment that ‘It’s not you, it’s me’ text, in the near future we’ll be throwing in a droopy slide-whistle to complete the effect. To help with their miniature compositions, Skype have enlisted a man who’s already whipped abstract emotions into music with more success than any other living person - the legendary Paul McCartney.

And credit to Paul McCartney, that beautiful soul, he’s only gone and peaked during this behind-the-scenes making-of video.Take a look at the sheer, ineffable Paul McCartneyness of this thing, and recline in awe at the self-actualisation on display. This video may well be the single most Paul McCartney thing that’s ever happened in the history of Paul McCartney being Paul McCartney. In one minute and thirty seconds his very being is squeezed like an Innocent smoothie until we’re left with a pure and unconcentrated hit.

The video opens with Macca on a mission, he’s mid-stride in his oak-panelled home studio, crouching to wag a stern index finger directly into the camera - ‘You think Skype’s new range of Valentine Mojis aren’t gonna rock’n roll?’ He seems to say, ‘well you can sodding well think again!’ Then comes the glorious rainbow of unfiltered McCartneyisms. Like a man somehow doing an unconvincing impression of himself, his every movement comes with its own self-aware meta-narrative, a stage direction to the audience underlining the fact that yes, it really is me, and yes, I am really am doing the thing that you just saw me do. He cha-cha-chas at the camera whilst strumming his acoustic guitar at the mixing desk, he draws a heart in the air whilst cooing into the mic, he jumps back in mock-horror after clanging a minor chord, he scats, bee-bops, nods his head and clicks his fingers as one of Skype’s anonymous hired-hands drags coloured boxes across the screen. He is a man in his absolute element. A man who, like Peter Kay sliding on his knees after telling a joke about kids at weddings, is never content to let something speak for itself. He is simultaneously the actor and the audience, the punchline and the canned-laughter, a man who has been hermetically-sealed in by his own staggering talent and fortune, and now floats freely in his own self-contained world.

Modern-day McCartney is, in essence, the human embodiment of Skype’s parent company, Microsoft. He is a man with unrivalled cultural ubiquity and infinite resources, yet he cannot escape a certain air of delicious naffness. Witness Microsoft’s much-maligned Songsmith advert and you see the work of a company whose perch is so high that they’ve forgotten what the world looks like at ground level. Witness McCartney’s Meat-free Monday Vegan Rap and you pretty much draw the same conclusion. He’s teetering here, there’s a moment where he’s reading out the URL and you can see his cogs whirring, do I… do I turn this into a song? Do I… do it in an Indian accent? Wait, rap IS Indian right? But it’s too late - the fingers have started clicking and he’s lost once again in the miracle of music. John Lennon once lamented Paul’s tendency to write what he called ‘Granny songs’, and it’s precisely this absence of filter that makes Skype’s behind-the-scenes video to be so endearing. Though it’s nominally a promo clip for an Internet giant, it feels more like an authentic snapshot into the modern day existence of an unparalleled figure, a man whose solace in music 100% to the core.

Think about it, if you did live a day in his life, you’d quickly realise that your fame has essentially rendered you under house-arrest. You’re Paul McCartney, you’ve transcended humanity and now you’re an omnipresent cultural fog. The world has been raised on your tunes, and when the Earth finally implodes and the stars collapse in on themselves, it’ll be the final bars of Hey Jude that’ll echo into eternity. Only you can look back at duetting with Michael Jackson on Thriller and reflect that yeh, it was a pretty good laugh that. When you’ve created the shadow that the rest of us live in, you’ve essentially forfeited your life for the greater good. So really, what else are you gonna do except spend your days pottering around your multi-million pound studio bashing away on all your instruments? Exactly.

Before this video I thought of McCartney as being like a flat-pack piece of IKEA furniture who’s assembled every now and again to remind us all that he’s still rockin’. But now I can imagine a more fleshed-out version, a man whose own life doubles as a jaunty Roman A Clef, a real-world songsmith who can’t clatter a spoon against his bowl without wanting to go and make a riff to accompany it. Perhaps this our future, every waking moment soundtracked by a McCartney-penned audio Moji. Perhaps our children will be barely sentient, they’ll slouch on the sofa and grunt five-second snippets of Maxwell’s Silver Hammer to each other. If so, just think it could be worse - Skype could’ve decided to reach out to Ringo.

In Photos: Tame Impala @ Manchester A...