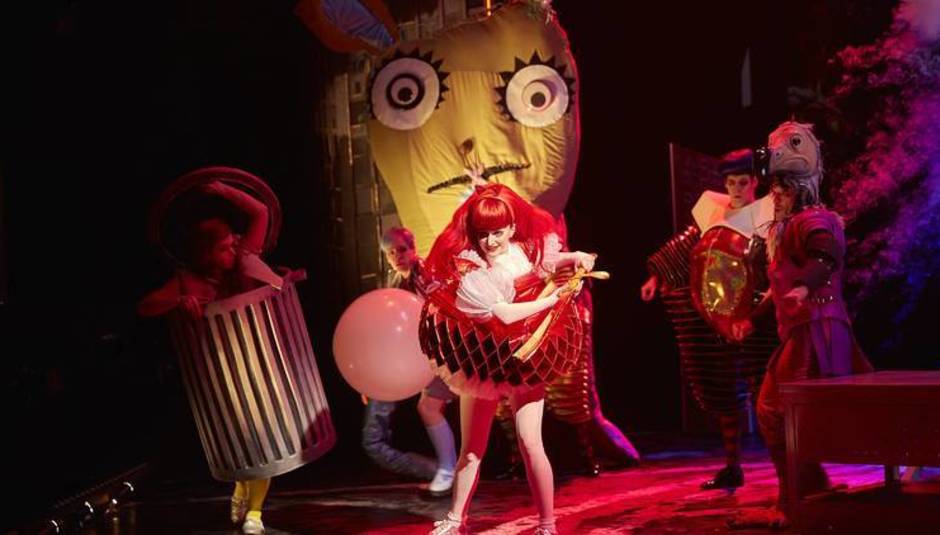 Damon Albarn may not have written the lyrics for wonder.land, the retooling of Lewis Carroll’s beloved and much-adapted Alice... books playing at the National Theatre, but his fingerprints are all over it; and not just in its music - in its preoccupation with the splintered relationship between digital and “real” life, in its London identity, and in its willingness to be both accessible and thoroughly weird.

Albarn has dabbled in theatre before, developing two operas, 2007’s Monkey: Journey To the West and 2012’s Doctor Dee, but this is the first time he’s touched something with such broad appeal. This isn’t Chinese folk tales or obscure Tudor mystics, this is Alice's Adventures in Wonderland and though it strays far from its source material, a version of Alice… performed at the National, with its reputation for dark, interesting family fare (in the past they’ve handled adaptions of War Horse, His Dark Materials and Terry Pratchett’s Nation) is going to attract serious attention. More than that, this is a real musical - tunes, memorable characters, the full works. It’s Albarn’s first real opportunity to bring something new to mainstream theatre.

Wonder.land, co-written with playwright and lyricist Moira Buffini, is equal parts brilliance and disappointment. Giving the well-worn story a digital twist is a neat idea; here “Wonderland” isn’t a dream or a fantasy world, it’s an online role-playing game. Lead character Alice 'Aly' Hatton, played with relatable charm by Lois Chimimba, doesn’t fall down a literal rabbit hole, she gets lost in the screen of her smartphone. Wonder.land is as real a 'place' as Minecraft or Facebook: a social hub, a playground and somewhere to hide. It’s to Buffini and Albarn’s credit that they never judge the online experience, it would be so easy, and so lazy, to paint their characters’ virtual lives as unhealthy. Instead they understand that digital worlds are an instinctive part of us now, and use that platform to channel the visual weirdness of Carroll’s story. We cut constantly between Aly’s drab, very grey London of broken homes, tower blocks and school bullies, to the riot of psychedelic colours and images she escapes to in the game. She creates 'Alice' as her online avatar, a super-femme version of the traditional Alice - blonde-hair-blue-dress-white-pinny, given a Lady Gaga cyber-makeover; like everyone she meets in the game, it’s a mask to hide behind: Tweedledum and Tweedledee, the dormouse and the Mock Turtle all representing teeangers running from themselves - it feels very real, and act one rarely puts a foot wrong. Aly feels like someone we know, or someone we were: the new girl at school, slightly out of step, struggling to deal with her parents divorce, and hiding in the loos at the lunchtime.

Given how perfectly wonder.land sets up and executes its initial premise, it’s a shame that act two drops the ball so dramatically. Nuance is largely abandoned in favour of flash and bang, the villainous Mrs Manxome (played with scenery-chewing aplomb by Anna Francolini) is a pantomime baddy parachuted in from another show, and the finale blurs (ahem) the line between the gaming world and the real one in a way that doesn’t feel true to the rules of the narrative. Some characters (Aly’s GBF, Luke) feel bolted on, others (her mis-shapes, mistakes and misfit friends in the game) feel undeveloped. Aly’s Dad, the 'mad' Mr Hatten goes from sensitive dreamer to Russell-Brand-via-Harold-Steptoe caricature. The day is saved by a selfie stick. It’s all a bit much.

Perhaps the most disappointing aspect is this: despite one of the best British songwriters of his generation being at the helm, you come away from wonder.land unable to hum a single bar. It’s all very accomplished, and it all serves its purpose in the narrative -most of the dialogue is delivered in song- but there’s little that stays around longer than needed. Originally Albarn scored the show as 'electronica meets music hall', which sounds brilliant - little of that oddness has survived the workshopping process.

There’s a lot to like here- it’s visually great, it’s impeccably performed, and it gets off to a hell of a start, but by the time the curtain falls you’re left regretting the wasted potential. In both Albarn and Buffini’s show and Carroll’s original book the most important question of all is asked by the Caterpillar: 'Who are you?' It’s a question Wonder.land could do with asking itself.