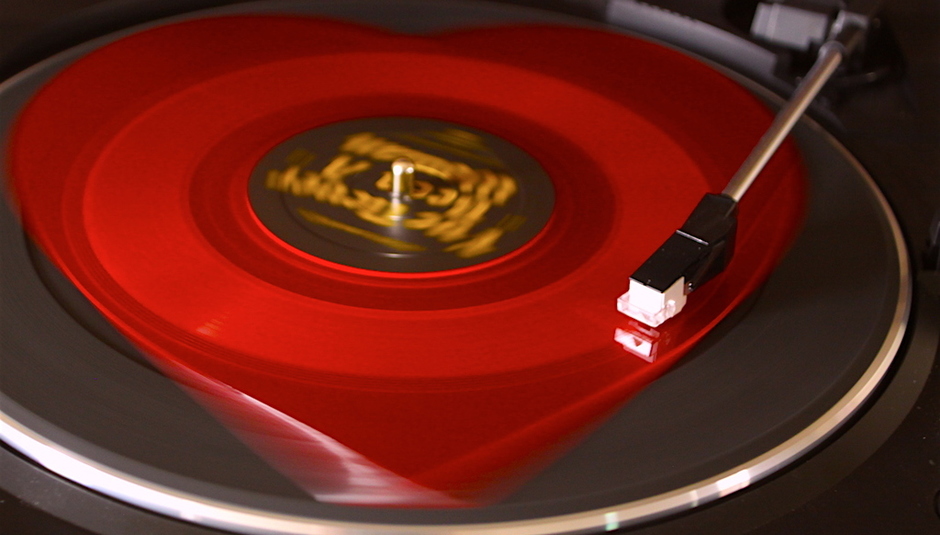 This fascinating piece originally appeared on [PIAS]'s website, as part of their Independent Echo newsletter (or TIE for short). Find details about how you can subscribe to the mailing list to learn more about the machinations of the Independent Music industry at the end of this piece...

Why are record labels having to wait up to four months for their vinyl orders to come back from pressing plants? Because people love the format more than the music business can handle right now.

Vinyl album sales totaled 1.3m in the UK last year – the biggest tally since 1995. As for the US market, it’s a similarly intense resurgence: vinyl sales have quadrupled in the past half-decade, according to Nielsen data, narrowly missing out on a 10m annual sales milestone in 2014.

This upswing in popularity has triggered a rush of excitement at labels and retail, which has in turn pushed production orders into the stratosphere. Yet unlike the more convenient CD, vinyl manufacturing requires a frightening amount of expertise, specialist equipment and contingency planning. All of which, as we stand today, is rooted in the past – and buckling under the weight of demand.

“If I’m being honest, the ‘vinyl revival’ has actually been a bit frustrating for us because we struggle to give customers the service levels they’ve become accustomed to in the past,” says Karen Emanuel, MD of Key Production – the UK-based agent that project manages vinyl creation for a wealth of independent and major labels.

“There simply isn’t enough capacity for everyone at the moment at European pressing plants.

“I love vinyl, it’s great – we’ve never stopped making it. But as the opportunity [of the format] has grown for labels, so too have the requests for huge orders of reissues, especially when companies from America start calling…”

So why can’t European vinyl pressing plants just increase the number of machines and operators to match the demand? Sadly, it’s not that simple.

“WE LOVE VINYL, IT’S GREAT. BUT AS THE OPPORTUNITY HAS GROWN FOR LABELS, SO TOO HAVE THE NUMBER OF ORDERS…”
KAREN EMANUEL, KEY PRODUCTION

These pressing machines are intricate beasts – not to mention expensive. The most cost-effective route to increase capacity is to buy in classic second-hand machines from bygone manufacturers.

These romantic relics from the first golden age of vinyl might be operational, but they’re not straightforward. To reach market standards, they need to be reconditioned. That’s every aspect of their make-up: not just the presses, but the piping, the chillers, the oil, the galvanic bath, the plating…

As such, more second-hand equipment has to be drafted in in the shape of spare parts, and the costs rack up. Even once a pressing plant has all of this equipment together – which would stretch far into a six-figure cost for just a single machine – they’ve then got to find someone who knows what they’re doing to run it…

So, what do superstar DJs, multi-millionaire footballers and retired vinyl engineers have in common?

If you want to find the best, you’ve got to scout the world. Because they’re worth their weight in gold. Replication and manufacturing powerhouse EDC, based in Hamburg and Hanover in Germany, has recently invested in its very own automatic vinyl presses – seven Swedish Toolex-alpha units. Three of these presses are already up and running, with another four set to become operational in the new year. This will allow EDC to create 400,000 – 450,000 vinyl discs each month. All of these machines have been painstakingly repaired and optimised by experts in the field.

EDC MD John Fitzgerald tells TIE: “When you buy second-hand, you assess the condition of the equipment – you expect some wear and tear, but always when you start taking the machine apart, you’ll find problems.

“We’ve had engineers and technicians welding and fixing parts in the machines, dealing with rust corrosion. They’re very solidly built presses, but they’re 30 or 40 years old.”

“WE HAD TO CALL UP CONTACTS IN ITALY, THE US, SCANDINAVIA AND BEYOND TO FIND EQUIPMENT THAT WAS UP TO OUR STANDARDS.”
JOHN FITZGERALD, EDC

He adds: “Luckily we have some people within EDC who’ve been with the company that amount of time and have experience running vinyl presses. But they had to call up all their contacts in Italy, the US, Scandinavia and beyond to find equipment that came up to our standards. It took us 12 months.”

Comments Key Production’s Emanuel: “We’ve heard of [plants] spending huge amounts on equipment and then realising they’ve not got the expertise they need to run them. It’s a strange situation – loads of people are being pulled out of retirement to show the modern music business how it’s done!”

Imagine a vinyl version of Hollywood blockbuster The Expendables: action heroes long thought out of the game flexing their muscles once again – and saving the day.

Tim Bevan, MD of vinyl production and creative packaging specialist Modo, says: “One of the keys to fixing the supply/demand problem will be training new engineers. But that won’t really become a ‘career choice’ for young people until we know that there’s a sustainable and strong vinyl market for the next few decades.

“I sincerely hope there is, because vinyl is beautiful. It’s how music is supposed to sound!”

Whispers in the market suggest that’s exactly what’s happening behind-the-scenes, with companies in the Czech Republic, Holland and Germany all apparently creating vinyl presses from scratch with modernised equipment. (One far-flung rumour even involves a vinyl-loving inventor who used to work for EMI in Italy, who is now working on a vinyl press that doesn’t require any steam.)

One industry mole told TIE that one of the potential new manufacturers had invested millions in a handful of machines – and may now charge €500,000 Euros per year to labels if they want to lease just one of them.

“I don’t know about that, but I do know that buying in second-hand equipment seems a much more cost-effective way to do this for now,” says EDC’s Fitzgerald.

“BUYING SECOND-HAND EQUIPMENT SEEMS THE MOST COST-EFFECTIVE WAY TO DO THIS FOR NOW.”
JOHN FITZGERALD, EDC

“There’s no turnkey solution: [buying second-hand] involves a different level of investment to make sure all the individual elements of a press are up to scratch. ”

Adds Key’s Karen Emanuel: “My dream is for it to be like the old days when there were a lot of plants with a lot of machines that was super-efficient. But that ain’t going to happen overnight.

“I’m very glad to hear people are investing in new machines and that new pressing plants are popping up. This is a market that desperately needs more competition.”

An overwhelmed market with ripe commercial opportunity in manufacturing?

It’s perhaps no surprise that there are also rumours in the market that Chinese injection-moulding giants are experimenting with cheap-and-cheerful ways to approximate vinyl manufacturing at a wisp of the traditional cost.

“I should imagine that designing a mould of a vinyl template isn’t impossible, but we’re discounting that possibility,” says EDC’s Fitzgerald.

“We do vinyl, and injection moulding is not vinyl.”

Another consequence of pent-up demand in the vinyl market is a rash of independent record labels that have taken matters into their own hands. Mississippi-based Fat Possum took the plunge last year, with founder Matthew Johnson buying in nine presses for a reported bargain $100,000 pricetag.

Sold as scrap metal, Johnson refurbished the machines in partnership with AudioGraphics Masterworks owners Mark Yoshida and Brandon Seavers. The trigger for the label was seeing 3,000 Modest Mouse records stuck in US customs over Christmas 2013 – sapping useful festive revenue from the company.

But going DIY as a vinyl factory wasn’t a simple exercise.

“We bought a scrapped pressing plant, that was all wrecked,” Johnson told The Independent Echo earlier this year.

“We loaded it wrapped in plastic because pieces of it were falling apart. It was ragged out. And then we got this old guy to put it all back together.”

He added: “The infrastructure you need is crazy; a huge boiler, steam pipes… these things don’t come with a manual.”

“VINYL IS BEAUTIFUL – IT’S HOW MUSIC IS SUPPOSED TO SOUND!”
TIM BEVAN, MODO

Soon after opening, IRP reportedly had to spend $5,000 replacing a single screw.

“I think it’s brilliant that the indies are going DIY with vinyl,” says Modo’s Bevan.

“It’s actually quite inspirational. But I can only say one thing – be careful!”

Key Production’s Karen Emanuel says her company is very happy to leave the high-risk game of manufacturing to her company’s partners.: “It’s very difficult, especially in the UK, to make any money from the vinyl pressing business,” she says. “It’s a very expensive process, a lot can go wrong, and you need real expertise.

“We’ll stick to what we do best. It’s a bit different if you’re a label because you can manufacture your own work, so there are other advantages. But it’s a risky game.”

If European manufacturing capacity does increase in the coming years, will it be worth it?

Can it last? “We think robust growth for at least the next three years is a pretty safe bet,” says EDC’s John Fitzgerald.

Adds Key’s Karen Emanuel: “I would have expected the growth to have levelled off by now, but it hasn’t, it just keeps on increasing.

“I hope that more capacity coming on board will relieve the pressure. Also, with the resurgence, the majors have reissued so much of their catalogue. I’m hopeful that will calm down in future.

“I can’t see vinyl skyrocketing forever, but I think it will always be there to some extent. One good sign is that all of my friends’ kids are asking for record players this Christmas…”