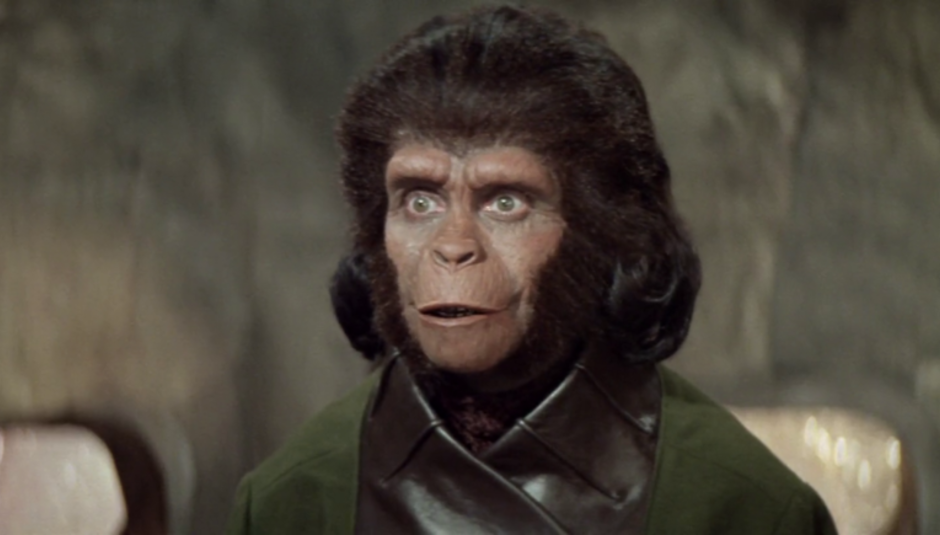 This year’s Meltdown Festival, curated by David Byrne, was another cultural love-in. One of the events I was looking forward to the most was the screening of the original Planet of the Apes with the BBC Concert Orchestra being conducted by Robert Ziegler on the final night of the festival.

Planet of the Apes is a 1968 film directed by Franklin J. Schaffner and staring Charlton Heston, Kim Hunter, Roddy McDowall and Maurice Evans. It is the story of four astronauts who land on a mysterious planet where apes are the dominant creature. Humans are mute and live a hunter gather existence in the forests at the periphery of Ape society. After being capture separated from his crew by an Ape hunting/raiding party Taylor (Heston) suffers an accident that renders himself temporary speechless. Dr. Zira (Hunter) sees something different in Bright Eyes (her pet name for Taylor) and brings him into her laboratory for tests. When she finds out he can write, she informs her partner Cornelius (McDowall), he says Taylor goes against the sacred scrolls that simian society is based on and them even speaking of it is heresy and Dr. Zaius (Evans) will want a trial, and possibly their heads, hinting at the barbaric Ape justice system if you stand against the state. Eventually his true nature is revealed and the main crux of the film, a discussion about evolution, science, and man’s relationship with animals and nature is all played out in Taylor’s trial before once of cinema's most iconic ending. Schaffner was also able to discuss issues of race and wrongful imprisonment too, through Taylor’s treatment when held captive. Schaffner was able to include elements of this and issues of human and civil rights into his film, which sadly still resonate today.

At the time, Jerry Goldsmith’s original score was as groundbreaking as Schaffner’s film. Goldsmith employed experimental, abstract and tonal elements to give the score and an organic and tribal vibe that really resonates with the films futuristic and primitive culture images.

Before the performance as part of Meltdown, of I managed to get a few words with conductor Robert Ziegler....

How did you get involved with the Meltdown this year?

This is the second film and music project I’ve done at Southbank Centre - the first being Stanley Kubrick’s 2001: A Space Odyssey. This was added to the Meltdown Festival fairly late in the planning process.

Is it a film that means something personally to you?

Jerry Goldsmith is one of my all-time favourite film composers. I grew up in Los Angeles and heard his music often in films and on TV. He started out in live TV in the 1950s and was always one of the top composers in Hollywood. I found out recently that we shared a piano teacher, Jakob Gimpel - but about 30 years apart! I remember seeing the premiere of the original with my grandmother at the famous Chinese Theatre on Hollywood Boulevard in 1968. It’s really like a longer episode of the famous 1960s series “The Twilight Zone” written by Rod Serling. I didn’t realise until recently that he also co-wrote the script for this film. And, coincidentally, Jerry Goldsmith was a regular composer for “The Twilight Zone”….. Do I sound like a nerd?

Do you think that these performances are the future for the BBC Concert Orchestra, rather than the performances they were known for in the past?

The Concert Orchestra has always been wonderfully versatile and eclectic in the music they play. I’ve conducted them in everything from Schoenberg and Mozart to shows for Donny Osmond, Randy Newman and Annie Lennox, film scores and operas. As I mentioned, live film and music events have become wildly popular around the world and are introducing a new audience to live orchestral music.

Who are your favourite soundtrack composers?

Jerry Goldsmith, Bernard Herrmann, Angelo Badalamenti, Erich Wolfgang Korngold, Miklos Rozsa, John Williams, John Barry, - mostly the old guys but there are so many around now who are great!

What other films would you either like to perform live or re-score for a similar performance?

Anything by Bernard Herrmann, and I’d love to do Lawrence of Arabia. And maybe Michel Legrand’s Les Parapluies de Cherbourg.

After this performance what are you working on next?

Recording sessions for a new film score from Jonny Greenwood/Radiohead, a short tour of Pete Townshend’s Classic Quadrophenia in Germany and Austria, another performance of 2001:A Space Odyssey in Tokyo and a UK tour of Holst’s The Planets with the Royal Philharmonic Orchestra.

Have you seen/are you planning on seeing any other performances during this year’s Meltdown? If so why?

Eliza McCarthy, Matthew Herbert, Atomic Bomb! and Benjamin Clementine - mostly because I don’t know anything about some of them and Meltdown's a great place to explore. And I want to take a look at David Byrne’s library of music books.

The performance was a fitting close to another exquisitely diverse Meltdown. It was a moving experience to be sitting a few hundred meters away from a live orchestra. At times it was impossible to know whether to watch the film, or the musicians. When your attention was drawn into the film, which happened more regularly than I would have liked, you were totally oblivious to the orchestra as everything was seamless. What was really enjoyable was watching the orchestra watch the film. While they were probably watching to know get ready for their cues, it added to the spectacle, as at the end of the day, they were enjoying experience too. Going forward events like this will become more and more common than they already are, which is fantastic for fans of the cinema and let’s hope the Ziegler and the BBC Concert Orchestra are only a few feet away from it when it happens.