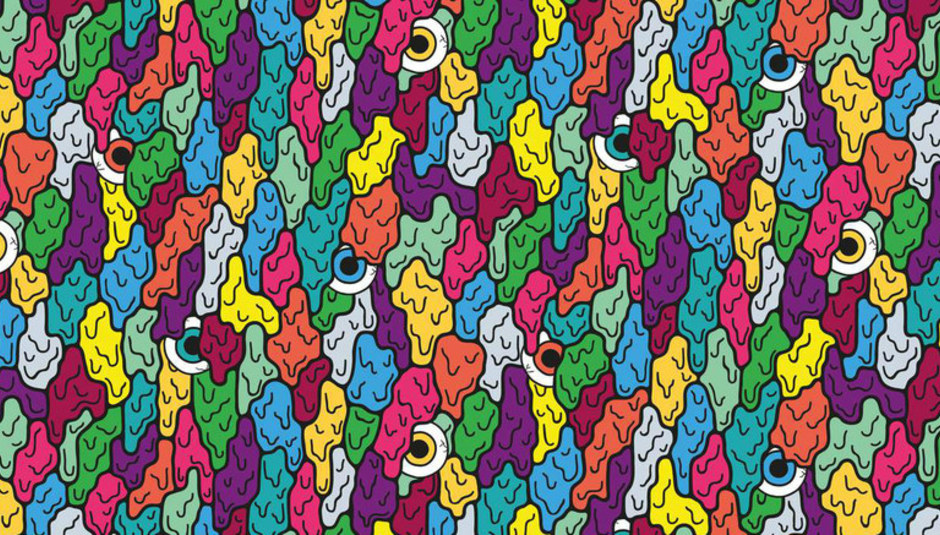 Everyone attending Visions looks exactly the same as everyone else attending Visions. But with a line-up ranging from disco-pop prince Shamir to Ceremony via Holy Fuck, it’s pretty certain that we’re all having totally different days out. The one-day festival takes over Hackney every August and here’s a tip if you are planning to go next year: arrive early for everything. There are queues and then some - my friend Tom queued for over half an hour for his wristband and I queued with him because I am an excellent friend, a bloody decent human being and I hate doing things on my own.

It’s a hot day but even if Girl Band played in a castle of ice in the middle of winter on Hoth, they’d still sound like they were melting. Dara Kiely’s vocals aren’t so much sung as delivered from a hell dimension as reception fades in and out while the beat swings from back-of-the-bus techno to full on beatdown by turns. It is all deeply, deeply excellent. The music makes the hairs on my arms shake. I’m extremely aware of my rattling oesophagus and very grateful that earplugs exist and are currently in my ears.

The Laundry crowd is rapt. “You’re the best band in the world!” some guy shouts between songs and then, buoyed by the general reaction, adds, “Do a ballad!” There’s not much chance of that as the band launch into a 29-second hardcore hit the inaptronymically named ‘The Cha Cha Cha’. Distortion squeals, Kiely’s face gets progressively redder and the middle-aged dads in the front row lose it. My friend Tom writes on his phone between songs “THEYRE SO GOOD”. My friend Tom is not wrong.

I haven’t seen Hinds before and I’m looking forward to it. Everyone says they are excellent live and I always believe everything everyone says. On a post-Girl Band high we walk to The Oval Space where we join - who’d have thought it - a queue to get in. It’s hot and while queuing I realise I am really hungry. Getting lost in Hackney and walking to the Oval Space and back twice in two hours is probably the most exercise I have done in months, and I haven’t factored food into my strict previously-11-now-9-because-I -missed-two-while-queuing-for-things band schedule. I hope this sudden and all-consuming hunger doesn’t become a distraction.

The Oval Space is a big warehouse. The main hall, where Hinds are playing, is currently the approximate temperature of the sun. The room is packed and, look, I’m going to level with you here; I didn’t see much of Hinds. Here are the reasons: 1. it was fucking hot in there. 2. It was packed and I am short. 3. I was very, very hungry. What I saw of the band through other people’s phone screens looked like fun - Hinds certainly seemed to be having a nice time whacking open an eyeball pinata and racing through indie-grunge tracks that easily filled the cavernous room. But when a very tall man with a backpack on stood in front of me a couple of songs in, I turned to Tom and I said, “Tom. I’m out. Let’s get food.” Tom is a good friend and a pliable gig companion, and so we left.

Let’s say you’re at Glastonbury. If the Oval Space is the Stone Circle then St John’s Hackney, where we are heading next, is the John Peel tent. Luckily, Visions is not Glastonbury so we got a bus (and the Oyster reader was broken so, like love, it didn’t cost a thing).

We are not surprised to find a massive queue snaking between food stalls at St John’s, but, in happier news, we also find a jerk chicken stand and my friends Gem and Mark quite near the front of the queue. With all apologies to everyone and every standard of etiquette I hold dear, we pushed in. I’m sorry. I agree: I’m the worst.

Jens Lekman is not the worst. He is the cheeriest, cheesiest man alive. In his oversized button up shirt and ratty old baseball cap he looks a bit like the kind of cheery career gambler you’d find with a Skol and a fag outside William Hill. Starting off with some gentle acoustic tracks, things take a turn when he gets the “band” (a Roland sampler) involved and turns the church aisles into a full on dance party. He dances his literal dance moves and sings songs like ‘What Would Jens Do?’ written in the third person. He’s a one-man Take That. If anyone else did it, you’d roll your eyes and walk off but when it’s Jens? All you can do is dance.

Surely there is no better way to watch The Antlers than in a dilapidated church as the sun sets through a stained glass window behind them. On paper, this was going to be the greatest, most emotional hour of our lives. In practice, the scheduling just didn’t work. The first half of the set was heavy on the quite boring new album and the crowd, most of whom had been drinking all day and had raucous fun with Jens, wanted to dance rather than wallow.

Things picked up a bit towards the end as the band brought out “hits” like ‘I Don’t Want Love’ and ‘Putting The Dog To Sleep’, at which point you wish you had someone’s hand to hold so they could squeeze it and let you know that everything is going to be ok. I started to feel unbearably sad, which is exactly the reason anyone ever listens to The Antlers. My heart felt funny and, as the light faded, I looked up at the stained glass window behind the band and wondered if I was having a religious experience. Probably not, really. Hard to have a religious experience when you’re surrounded by people who’ve stopped pretending to pay attention and are now talking about the relative merits of J-cloths.

A hop, skip and a ten minute walk from St John’s and you’re at the newly-refurbished, yet to officially open Moth Club. This is my new favourite place in the world. It’s done up the way you would have decorated your teenage bedroom if only your parents had let you cover the ceiling in glitter and you were the kind of teenager who collected working men’s club ephemera. It is simultaneously the worst and best place to see HO99O9.

Before the band come on, a guy in a Metz t-shirt tests the lighting rig to see if it can take his weight. It seems ominous and weirdly calculated. Someone has lit an incense stick for some reason. Tension hangs in the air. Some club kids push their way to the front, smearing MDMA into their mouths just as HO99O9 mount the stage and TheOGM retches into a microphone. The crowd is a dog looking up at him, awaiting a command.

The second the first riff comes in, it all goes off. The dancefloor is one big pit. Metz guy is straight up on the lighting rig, hanging above the swirling mass of people pushing and clinging to one another indiscriminately. It feels like a Hackney imitation of a hardcore show, as though everyone here got together before hand to say, “Yeah, let’s give that a go.” I wonder what it’s like to come up to this.

I wriggle out of the crowd and buy a shot as HO99O9 crash through their righteously angry brand of hardcore-cum-hiphop-cum-theatre-of-the-weird, pausing only to explain their name. If you literally have to explain that your name is spelled “HO99O9” but pronounced “horror - that’s hor-ror” then it’s probably not really working as a name, is my basic feedback on that. Then it’s back to plumbing the depths of hiphop and coming out the other side - although no one seems too bothered about the actual music, as far as I can tell. Songs tumble into one another, the energy levels never dropping.

Queues: 10/10 if you love queues, 0/10 if you don’t
Food when we finally found time to have some: 8/10
Dickhead to decent human being ratio: 1:5
The chocolate bar I had at 10pm: 10/10
Bands I saw versus bands I planned to see: 5 v 11
Number of times I got lost: 2
Toilet situation: 8/10, some portaloos required
Number of people allowed to queue outside the Lithuanian Church: 0
Alcohol consumed: 7
Sets of earplugs lost: 2
Overall assessment of the day: 8/10

DiS meets Vennart: "Being in any kind...