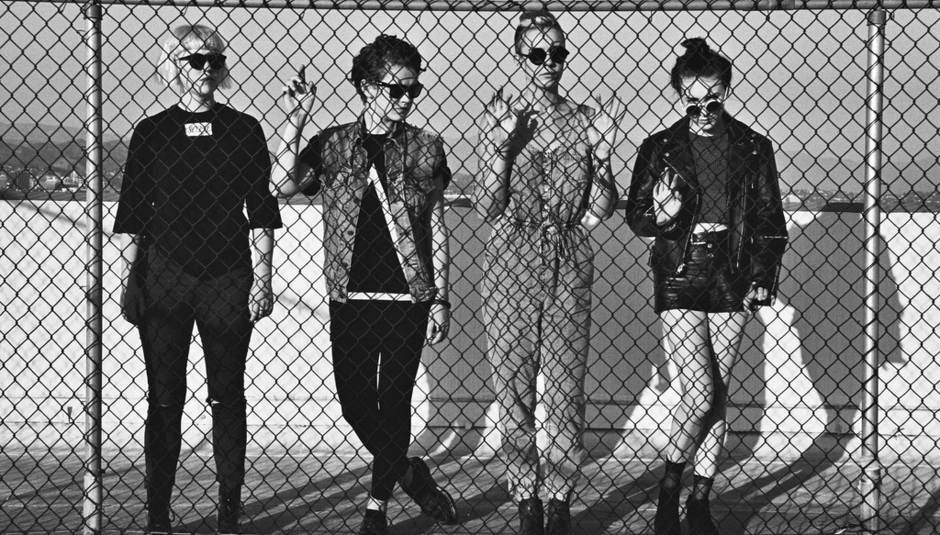 As part of our PINS takeover to celebrate the release this week of their second album Wild Nights their guitarist Lois MacDonald gives us a glimpse into things they've loved and learned touring so far this year...

We’ve been lucky enough to play with some incredible bands over the past year or so. This year, we've been on tour with Sleater-Kinney, Drenge, and Wire.

Drenge were so much fun to play with. I wish I had all of Eoin’s guitars. All of them. There isn’t one that isn’t worth having.

Watching the crowd go mad every night was awesome, you couldn’t help but jump in. We loved watching their set every night, our favourite was ‘Fuck about’ live, when it kicks in… "when the words get stuck in your throat" the entire crowd jumping up and down as one "all you wanna do it choke" crowd surfers flying over head, people screaming "on the lies that you’ve been FeEeEeEeEed." In Gateshead, there was a guy who dislocated his knee, but seemed more distressed that his was missing the show.

Drenge maintain a game face on stage, silent, brooding, cool as fuck, watching the mayhem descend in front of them. Back stage they bathe in Bollinger and Caviar.Or is it Vita coco? They are feminists. It’s all too much. Touring with Drenge over lapped with our shows with Wire.

Faith (PINS vocalist) first introduced me to Wire and their first album Pink Flag (1984). I was impressed with their immediacy, drawn to a sound that is still relevant, difficult to believe that it was created nearly 40 years ago. On tour Wire are very focused, independent and honest. Colin told us about how they are self-managed, self released (their label is Pink Flag) and run their own music festival. The festival is called Drill, and has no fixed format or venue. Something that reflects the band's continued dedication to concept projects.

On the last night of tour they asked us to play the last song with them, ‘Drill’. There wasn’t any time to practice it, so we spent sometime learning the structure backstage watching various youtube videos of the band playing the song in various places. They perform the song differently each time, so we were straight in at the deep end – however it’s a song based on repetition and a strong rhythm so we couldn’t go far wrong. It was brilliant to perform with Wire, our first live musical improvisational experience. Here’s to many more.

In March 2015 we went on tour with Sleater-Kinney. It was an honour to be asked to play with them. Riot Girrl has been a massive influence for me for as long as I can remember, screaming at the top of my lungs in my bedroom as a kid. Sleater-Kinney lived up to every expectation, they have always had something to say, and they're still saying it.

We played in Berlin for the first time with them, it was amazing to see them live: they were really powerful on stage, confident, skilled, and in control. Backstage the band were really cool and together too. We saw them play in four more cities after that, and I felt like I was soaking it all up, learning more and more each time. I found the whole experience really inspiring, they've been together for over 20 years and are still true. I can only hope we get to do the same.

Wild Nights is out now on Bella Union: