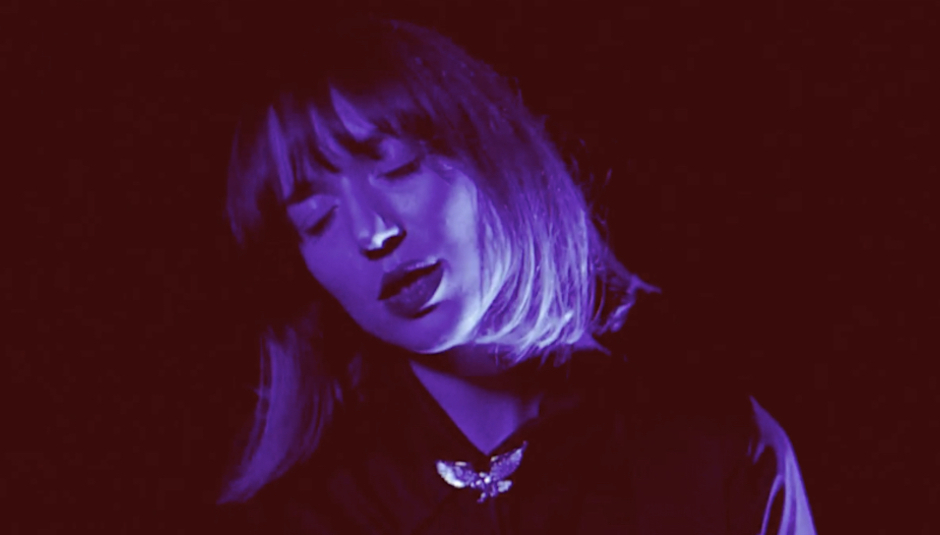 It's rare that we 'tip' many new acts these days. There are plenty of places that you can visit online to find out about the flavours of the nanosecond, but our focus here at DiS is primarily on album releases and offering you as much killer and as little filler as possible. Mostly, this is because we don't want to be the blog (boy) that cried awesome (wolf). Sometimes however, we come across something quite special and interrupt our reviews and in-depth interviews with established acts.

Enter English songwriter Hannah Lou Clark, and her songs that nuzzle their way into you. They wander toward you slowly at first but then their hooks cling like cat claws. These are pop songs but with gristle from a grunge-dunked youth. They're the kinda songs that feel like disembodied dreams in which you're gazing from the eye of the storm, lost in a drunken twirl that may last a minute or a lifetime.

Today, DiS is very pleased to premeire HLC's new video for 'Kids in Heat', the we've-had-it-stuck-on-repeat new track from her Silent Type EP which is released today via Quatre Femmes Records (a label she co-runs with her sisters) / Gravy Records. It's a tune that manages to suspend moments in time before unfurling and hurtling you into something not unlike Sharon Van Etten's 'Serpents'.

We believe she's a name to keep tabs on in 2015, and can't wait to hear her debut album (although in theory it'll be her second record, after dropping the moniker that saw her previous record land at number 20 in our albums of 2012 list).

DiS' editor caught up with Hannah to find out more about 'Kids in Heat'.

'Kids in Heat' is the sort of song that sounds like it hurtled out of you. Was it that easy?

Hannah Lou Clark: Sometimes I get an idea, or even just a fragment of one that instinctively feels strong. At this point it’s hazy and distant, but when I focus in on it, and pick up a pen/closest musical apparatus, everything falls into place instantaneously. Kids In Heat was one of those, but these mini epiphanies are rare for me.

What was the first kernel of an idea that came to you for the track and how did the song evolve to what we can hear today?

The initial catalyst for the song was my friend’s big blue eyes. The lyrics are pretty blunt, and musically I wanted to reflect them with a clamactic explosion of guitars. I have about 3 different recorded versions of it though. It took a while to get the mood right.

The video features some chaps in glittery make-up and dresses, do you wish glam and peacocking would hurry and come back in fashion?

I’d be pretty excited to see some new bands dressing up like The New York Dolls or Marc Bolan! Odd juxtapositions with aesthetics in music can end up creating something unique again. Mainly, I have a bit of a weakness for men in dresses! It seemed to work with the song too. Bonus.

This isn't your first rodeo... What lessons did you learn from your former life? What do you feel has changed from discarding your guise?

I can only trust my own opinions and ideas, which are much clearer now they’re not suffocating under synthetic wigs. Thus my grooming routine is much more simple! More importantly I know to keep my eyes on the Bull’s head to maintain balance.

You wrote the song whilst living above a Quaker house, is that living upstairs from God or like your sins being quietly judged from below?

A strange combination of the two! It was a bit like a confessional! Some days it felt very wholesome there, and others felt more sinister. We used to freak ourselves out and imagine that they were actually Satanists in disguise.

You've been involved in setting up the Quatre Femmes label, given all the stuff the 1% (Bono, Taylor Swift) have to say, how hopeful do you feel about bizniz side of music?

I help run it with my family, but the business side of things isn’t my forte. I get a kick out of recording, making videos etc. It’s more of a creative umbrella for me and the other bands to be prolific and inspire each other. Like most obsessive music fans, I want to impose my taste onto everyone!

Which acts on the label are you most excited about, and who should DiS readers be keeping an ear out for in 2015?

The Venus Lyx, they are totally brutal. A close companion recently likened their live show to ‘raw sex’. We’ll be putting out an EP early 2015.

If you could write a script for your 2015, what three key moments would it involve?

The Silent Type EP is release today. Visit: http://hannahlouclark.tumblr.com. Pick up the EP directly from Hannah via Bandcamp:

"I don’t mind connecting with as many...