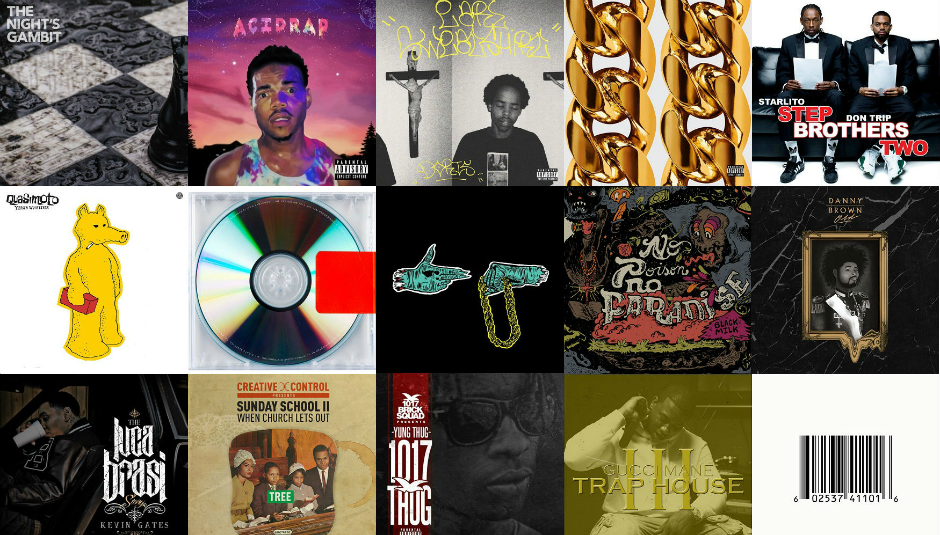 Ah 2013, the year that rap hall of famers huffed and puffed for recognition, but left us with only a face full of slobber and the sour taste of last night's Moët. In a year that Jay Z, Lil Wayne and Eminem all released albums, we were reminded that rap's former big hitters are all checking the mirror for grey hairs, when they should be looking out for the competition.

As ever, there is no shortage of rappers ready to take their place. Kendrick has been busy beating his chest in preparation for his next move, his growing confidence reflected in his increasingly jazzy collection of shirts - 2014 is his for the taking. Meanwhile, Pusha T and 2 Chainz managed almost-excellent records on major labels, albeit much stronger than those from A$AP Rocky, Drake, J Cole and Sizeable Sean

Kanye, of course, is already self-appointed rap royalty, but this year he promoted himself into the nucleus role. He is Steve Jobs, Michael Jackson, Walt Disney, Nike and William Shakespeare in the flesh. He's been to Paris and found inspiration in Le Corbusier lamps. He's proclaimed his deep love for J-Kwon’s 'Tipsy'. He's expressed a desire to design water bottles and he's hurtling towards your glass ceiling at a rate of knots. God speed Yeezy, because if anyone has the answers, then surely it’s you.

Outside of the year's event rap there were records and mixtapes, many of which were good, and a few which may well be great. But before counting down my favourites, let’s briefly consider the songs.

Whittling down the year into just ten rap songs is a difficult task, so I’ve done the sensible thing and made a playlist of fifty. I never was much of a list maker, but the below selection should hopefully be more representative of the sounds that have shaped my year.

Deniro Farrar is somebody who I just find myself rooting for – his straight-talking struggle rap coloured with touching details of family life. As his younger brother Tune awaits trial for murder, The Patriarch deals openly and honestly with the devastating effects of poverty and crime. Farrar is from North Carolina which is hardly known for its rap scene, and the record somehow feels all the more isolated for it –Farrar lacking even the support network and lineage of a major rap city. Even so, he has a natural ear for beats, and The Patriarch’s sombre and sometimes ethereal palette lifts his deep vocal range into new emotive grounds.

Doris is exactly the kind of record I wanted Earl to make – it’s inward, intricate and satisfyingly nerdy. Although songs like 'Chum' and 'Burgundy' do acknowledge real life happenings and concerns, he is at his best when creating surrealist fantasy worlds and nonsense narratives. On the likes of ‘Hive’ and ‘Centurion’ Earl wanders aimlessly into the night – pupils the size of marbles – arranging and rearranging words until they resemble a verse. At other times he’s happy enough to revel in his own gibberish – “the misadventures of a shit talker, pissed as Rick Ross’ fifth sip off his sixth lager”. Earl is audibly uncomfortable with fame, but he carries it well here with his casual cool and blasé delivery of complex lyric puzzles.

On this much-anticipated sequel to 2010s Stepbrothers, Starlito and Don Trip show exactly why they’re two of the smartest rappers out. Honestly, some of the things they do on this record are on a totally other level – writing consistently leftfield punchlines and songs that are heavy with drama, narrative and thoughtful introspection. ‘Caesar and Brutus’ might be most impressive of all, a modern twist on Shakespeare’s The Tragedy of Julius Caesar complete with theatrical strings and a suitably bloody ending. Stepbrothers Two is not quite as easy on the ears as its predecessor, but the chemistry between Lito and Trip is sharper than ever and this record continues to reveal new depths.

On balance, I've probably spent more time defending Yeezus than I have enjoying it, and that speaks volumes about the kind of art Kanye is currently making. It's the sort of record that warrants lengthier discussion than this blurb (read my full review here), but in short - it still gives me goosebumps. I love the brutalism of the production and how it punctures a soundsystem. I love its pointed anger, its bitterness and its wholehearted fucking belief in itself. I love its drama, its humour and its goofiness. Most of all, though, I love how reckless and beautifully imperfect it is, in a year of tiresomely calculated major label rap.

Killer Mike and El-P sitting in a tree, R-A-P-P-I-N-G. It should be no surprise that the bromance of the year has also yielded one of 2013s most solidly fun records, following last year’s colossal R.A.P Music with an album’s worth of the most creative threats I’ve heard over El Producto beats. Over ten terrifically taut rap tracks, the pair leaves us battered and bruised. They dance on our windpipes and slice through jazz hands. They tie up both of our feet and then take grip pliers to our teeth. Most excitingly of all, though, is this is only the beginning, and I get the feeling that they’re just getting warmed up.

1017 Thug is an absolute mess, but Thugga’s high-wire trap experiments are infinitely more exciting than any of the turgid ‘safe bets’ dropped on major labels this year. Harnessing the power of Atlanta’s most innovative synth wizards, Thug’s erratic energy makes him one of the most compelling new voices in rap. He’s not so much a rapper or a singer as he is a yelper, a bawler and an auto-tune maestro. This unique approach to melody might be abrasive at first – as is the lack of a proper mastering job—but once the hooks of Thug’s pop subversions get under your skin, you’ll have difficulty pulling them out.

Tree’s Sunday School tape was included in last year’s version of this list, and its sequel is just as gut-punchingly soulful – with added studio polish. The Chicago rapper/producer has a strong claim on having the best voice in rap, and he skilfully weaves it in and out of samples and drums that rattle with the energy of Atlanta trap. Tree might be an older presence in Chicago’s now burgeoning rap scene, but his vivid descriptions of the Cabrini Green projects makes his upbringing feel as real as yesterday. Sunday School II has its fair share of background struggle, but it’s more about being a kid and growing up oblivious to it all. There’s a certain blissful ignorance to the storytelling, then, and Tree’s delivery bristles with the excitement of just having the opportunity.

Rappers are often criticised for glorifying hood life, but you'd be a fool to level such an accusation at Kevin Gates. The Luca Brasi Story can be a grinding listen, presenting drug pushing as it does with all its grit and unpleasantness, and wearing its scars for what they are. Ever-so-slightly the better of Gates’ two releases this year, it manages to be both hard as steel but also tender as a butcher’s steak, packed full of bruised vocal melodies and songs that long for companionship. Sure, he might rap about fucking your wife in his Porsche, but a few songs later he just wants to cuddle up and watch The Notebook. Gates plays the role of the sensitive thug with rare conviction, joining a small club of rappers who can strike that balance.

From promising youngster to Complex cover star in the space of 12 months – and all off the back of a free project – Chance the Rapper is the success story of 2013. On this breakout mixtape he paints colourful swirls of life – from neon acid trips to bittersweet blues and the blood red of gun violence that lurks beneath it all. Acid Rap is the rap game Slumdog Millionaire, easily remembered as the feel good hit of the summer with its joyous horns and footwork drums, but its power comes from the growing pains and the ghosts found lurking in empty hallways. Although the tape stutters slightly in the middle, those ghosts from ‘Paranoia’ and ‘Acid Rain’ have haunted my dreams all year, just as the opening bars of ‘Good Ass Intro’ never fail to put a spring in my step. With this tape’s popularity Chance has provided a positive and hopeful new voice for Chicago’s voiceless, and for that he deserves all the plaudits that come his way.

Great rap records come in many different forms, but my favourite records – the ones that seep into my bloodstream and inhabit a space in my brain – are those that are inseparable from their location. Okay, so most rap albums can be quickly pinned down to New York or Los Angeles or Houston or wherever, but how about to a particular neighbourhood, or to particular streets? Over the course of his last three records Ka has invited us to Brownsville, Brooklyn; the block on which he was raised and spent over two decades surviving.

Brownsville has never felt as real as it does on The Night’s Gambit, from the familiar shadows of public housing that loom in the day to the echoes of violence that chill the night air. The silences can be just as menacing, peaceful to outsiders perhaps, but Ka knows otherwise – “We ain’t speak, clicking heat is our morse code,” he raps in his signature monotone. Lines like this are dropped in continually, with nearly every bar offering double or even triple entendre, and deadly rhymes hidden within deadly rhymes.

If Ka doesn’t spell something out for you, then it’s almost certainly there in the mise-en-scène – the tense percussion of ‘You Know It’s About’ evoking a chase, or the swelling strings of ‘Jungle’ the midnight wander of another lost soul. It’s a strictly cinematic approach to production, keeping you locked in its mood with barely a whiff of a rap beat to break the fourth wall. Although best enjoyed as a whole, you can drop the needle onto any of the record’s grooves and land back in Brownsville – the pulsing heartbeat behind every story and every simile. Ka’s muse is a source of both sadness and pride, and the rapper does it justice with the most vivid and all-encompassing rap record I’ve heard this year.