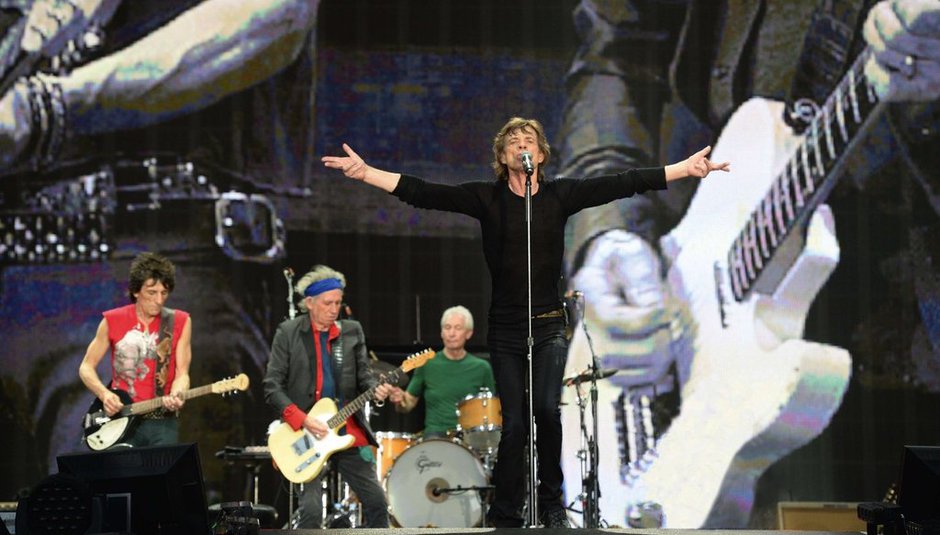 For the purposes of this review we’re going to have to take it as a given that The Rolling Stones long ago sealed their legacy as The World’s Greatest Ever Rock & Roll Band. Debate over whether or not this is true has raged interminably for decades, and there’s little point in wasting precious words explaining that I’m firmly encamped on the “damn straight they are” side of the argument.

Given that Sweet Summer Sun is essentially a “greatest hits” parade, played out to a vast, mixed crowd on a glorious day in Hyde Park, all that therefore remains to do is look to see if there is anything to detract from the experience of The World’s Greatest Ever Rock & Roll Band live. The selfish fan in me thinks that having only one song from Exile on Main St. – the Keith Richards-sung ‘Happy’ – is unforgiveable, but then look at the songs that did make the cut: ‘Jumpin’ Jack Flash’, ‘Brown Sugar’, ‘Satisfaction’, ‘You Can’t Always Get What You Want’, ‘Gimme Shelter’... it goes on like this, with 15 of the 16 songs genuine contenders for a place in the pantheon of the very very best rock songs ever written. Only 2012 single ‘Doom and Gloom’ feels a little perfunctory here, but then hey, they were always going to include it and besides, it wasn’t at all bad.

When it comes to a Stones show it almost feels as though you’re obliged to mention their age, be it in reverence to the energy of a bunch of sex- and septuagenarians taking to the stage or in illiberal embarrassment of the elder statesmen daring to think that they can recapture their glory days. Keef’s grey hair aside though, there’s a timelessness to the performance here that even outstrips the band’s Glastonbury performance earlier in the summer. Jagger is lithe and eloquent, Ron Wood sears and Charlie Watts imbibes his playing with a crashing energy that belies his grumpy demeanour. Whilst Richards may have declined as a guitarist, this is more than compensated for by Wood’s improvement over the years and a guest appearance from Mick Taylor, who scorches ‘Midnight Rambler’ and reminds us that he’s still the best player The Stones ever had.

Critics of the Glastonbury performance suggested the band struggled to straddle the right line between veteran pros and ramshackle rock & roll band, but here they are never less than perfect. ‘Jumpin’ Jack Flash’ and ‘Honky Tonk Women’ are loud and loose as they should be; ‘You Got The Silver’ and a gorgeous piano-led version of ‘Ruby Tuesday’ are tight and played right at the limits of the band’s capabilities. There’s also some stunning bass work by underrated long-term collaborator Darryl Jones, not least on ‘Miss You’.

When it comes down to it, the only thing that could spoil Sweet Summer Sun would be the presentation of the concert on disc, but this too is done with aplomb. Shot in glorious HD, the atmosphere of a sweltering evening in front of a visceral show is captured perfectly. Paul Dugdale’s direction wisely forgoes the seasick-inducing short jump cuts so beloved of contemporary music DVD directors and editors. As a result, you get the best idea of the gig experience that’s possible from the comfort of a living room, rather than the feeling you’re just watching a really long, flashy music video. The show is punctuated from time to time with voiceover interviews from the band, but these are infrequent enough and are neatly slotted in where songs from the set have clearly been edited out, so as not to feel intrusive. Plus one of them has ‘Sweet Virginia’ as the background music, so even this will put a big grin on the face of any Stones fan.

The only caveat to this is that yes, it is another cash-in on all those songs by these multi squillionaires. Plenty of live DVDs showcasing the hits exist, so this isn’t strictly necessary, but this 50th (ish) birthday show, on the anniversary of their famous 1969 show at the same location, is arguably among the best performances The Stones have yet recorded. It’s a lovely little way to mark a special occasion in music history and besides, we should be taking every last chance to hear songs this good performed this fucking well.

Celebrating 120 years of the Musician...

No Barricades: William DuVall on hard...