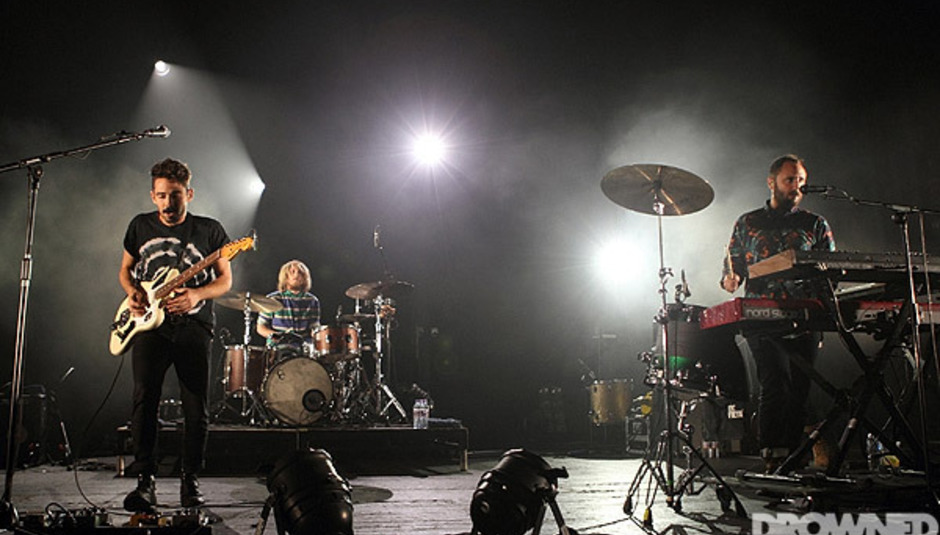 Hello. Thanks for tuning in to another stellar edition of DiS Does Singles. Well, the music is uniformly amazing. We can't speak for the words.

This week Warpaint returned with a new song of undulating brilliance, Empress Of switched up her sound to straddle pop's cutting edge and Disclosure showed why life as Mercury Prize losers won't be awful for them. As if that wasn't enough, Antwon is here to serve you a lesson in brass-laden hip-hop swagger and Public Service Broadcasting really like letters; enough to film their latest video at a postal museum.

That's not all though. Single of the Week comes from Local Natives (pictured aboved, by Burak Cingi at their recent Brixton Academy show. Full In Photos gallery here) and it cuts real deep. If there's any justice in the world, you'll see their indentation on many an Album of the Year list. The seven stages of grief include ‘shock’, ‘denial’, ‘guilt’ and ‘depression’. Sadly for tragedy-stricken indie bands, ‘write an album’ and ‘travel the world over’ aren’t included on the list.

Faced with the departure of bassist Andy Hamm and the death of singer-keyboardist Kelcey Ayer's mother, Local Natives had no choice but to craft their second record and move on. Watch the shot-on-tour video for ‘Ceilings’ and you’ll see the LA-based five piece lark about in front of fireworks displays, clamber over coastal erosion and punch a carrot in half. Soundtracking these hijinx is their half-forgotten trauma.

“Thinking of what we'd give to have one more day of sun.”

Even outside the moribund confines of Hummingbird, its latest single is a sobering listen. Its lilting guitar line and allusions to fleeting happiness are soured by a trudging drum beat that heaves the song into the past tense. Back to a chasm of memory that’s filled with hospital corridors and crushed cigarette stubs.

The footage that comprises ‘Ceilings’’ video is similar, each five second recollection is stitched together in random succession. It’s an aimless watch until you realise no greater context is necessary. You don’t need the entire Local Natives story to feel the bits that matter: the existential agonising at 3 A.M., the aching harmonies and the endless flight-soundcheck-hotel routine.

‘Ceilings’ holds a magnifying glass up to a frighteningly big picture. That way, everything’s so small you just might make sense of it all.

'Ceilings' is available to buy on super limited seven-inch vinyl

BEST OF THE REST

Since Warpaint first emerged in 2008, their minimalist maxim has become de rigueur. Bands like The xx and London Grammar have traded on a similarly breathless brand of spectral indie, while more pop-minded scallywags have openly professed their love for them.

Does ‘Love Is To Die’ justify such fawning approval? You’re damned right it does. Time away seems to have benefited the LA-based quartet with an even more masterful grasp over their instruments. Each tremor of bass and shiver of six-string contributes to the song’s spectral frisson until hearts are set aflutter at sweltering heights. Thankfully the band’s self-titled album is out in January next year, so we’ve got got three months to compose ourselves again.

Empress Of - Realize You

Remember when we swooned hard for Empress Of’s ‘Hat Trick’ and made it Single of the Week? You know, that slowburn number with the heart of Dusty Springfield and the soul of Grace Kelly. Yes, it was amazing and we yearned for more songs of wistful synth-lead romance.

Instead, the young Brooklynite has gone alt-pop instead and that’s totally fine. As it turns out, Empress Of is really quite good at weaving together gasping parps of electronica and oddball lyrics, “freedom it ain’t if I can’t get free with you”. Watch out, 2014.

‘Apollo’ was released in advance of the Mercurys by the Lawrence brothers to showcase the fact they’re not exactly short of tunes. They might not have won the grand prize but the point stands. This is a stonking slice of house music and its architects aren’t going anywhere.

Antwon is a hip-hop auteur from San Jose who has previously rapped over Goldfrapp samples and penned a song called ‘Dying in the Pussy’. Mercifully, ‘Helicopter’ avoids any metaphorical confluence between mortality and vaginas in favour of timeworn self-aggrandisement.

From “super radical” style choices to ballin’ “in the club” no bravado-friendly trope is left unturned by the jovial wordsmith; there’s even a reference to “bad girls between my blankets.” This proved particularly entertaining as it evoked the concept of fornicating on a bed adorned with a novelty duvet cover. We sincerely hope this is standard behaviour for Antwon and no one has had the heart to correct him.

Public Service Broadcasting’s latest act of joyous folly sees them debunking to the British Postal Museum so that they might play their studious brand of art-rock in the dead of night to no one in particular. Because they’ve got a dubious taste in tweed, and why not?

Honeyblood - Kissing On You (FatCat Records)

Overdrive pedals switched on? Check. Loved up vocals in place? Check. Cursory shout out to your cat sorted? Nope.

This isn’t Best Coast, bozo. This is Honeyblood and they’re almost the same band, but good enough for us not to care.

The Killers - Shot At The Night (Island Records)

Good news: The Killers might be splitting up soon. Bad news: A new Brandon Flowers solo album is on its way instead.

In Photos: Travis @ The Roundhouse, L...